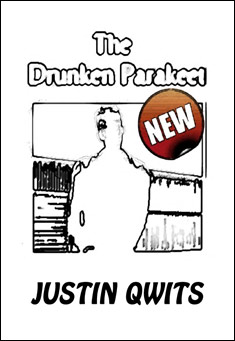 Jack is a twenty-two year old party boy that can't hold down a job to save his life. He curses, he gambles, he drinks excessively and his best friend Barry is no better. He has two weeks to find a job before his father kicks him out of the house once-and-for-all and even though he's heard that before, this time he actually believes it. Will Jack land a job or will he get drunk instead?

When I was five years old I wanted to be a magician.  Then I realized that magicians were just gay men with strange hobbies so I put down the wand and I stopped feeding my rabbit.  It died a week later.  His name was Charles and I made him disappear.  Everybody liked magic before they found out how gay it was. Except Criss Angel of course.  I guess he never got that memo.  Or he did get the memo and he just chose to ignore it.  Either way I don’t care.  We aren’t here to talk about Criss Angel.

When I turned eight I watched my first house burn to the ground and I thought about becoming a firefighter.  It was beautiful.  If you’ve never stood next to someone while all their possessions went up in smoke I highly suggest that you try it sometime.  But I can’t be a firefighter.  I’m not risking my life trying to rescue an eight hundred pound woman that can’t escape a burning building because she’s too fat to stand up out of bed.  No thank you.

Around my tenth birthday I started playing baseball and I actually thought that I had a chance of making it to the pros.  I played everyday for two or three months even.  I couldn’t get enough of it.  Then I found out that a baseball season lasts nine months.

At fourteen I began listening to rap music and I started writing “dope” rhymes in hopes of becoming the next white rap superstar.  I bought baggier jeans and I started wearing my hat to the side.

That lasted for about two weeks.

At fifteen I wanted to become an architect and design skyscrapers and small cities.  But not any architect, an “ill-ass” architect.

I was still listening to rap music.

At sixteen I took an interest in cooking and I considered opening my own restaurant.  But that came to an abrupt end one morning when I burned down my friend’s kitchen while cooking him an omelet.  It was a Western.

Seventeen years gave me enough wisdom to realize that I was setting my goals a little too high and I took my first job at a local supermarket and after three weeks of bagging groceries and scanning coupons for ten cents off of kitty litter I came to the conclusion that working just wasn’t something that I wanted to do and I quit a few days later.

I was still in high school at the time so I begin selling pot to all of my classmates.  Everyone I knew at the time smoked pot so I figured it would be a safe way at making some quick cash.  Boy was I wrong; and after smoking all of my potential profit in less than a week I was yet again forced to re-think my strategy.

At eighteen my father finally broke down and bought me my first car.  It was a real piece of shit but it was my piece of shit. The only stipulation was that I had to pay for my own insurance; which meant holding down a job for more than three weeks.  I reluctantly promised and my love of driving and fast food converged shortly after when I landed a job delivering Chinese food two towns over.  At last, a job I didn’t completely hate.  I got to drive around all day smoking cigarettes and listening to rap music; it was heavenly.