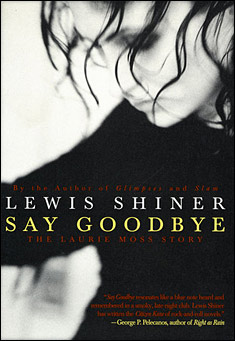 "Fresh and original...Shiner sings a song of loss and striving, where hard work and a lucky break guarantee nothing...Shiner's extensive research gives an authentic feel and keeps it from becoming a soap opera or a wearisome cover version of every other rise-and-fall parable. Honest, unpretentious and heartfelt, this novel remains a haunting refrain."

“It was my first Friday night in LA,” Laurie says in her press kit for the album. “I was stuck on the Santa Ana Freeway, thinking about buffalo. A vast single herd covering the earth from one horizon to the other, the way they used to, placid, lost in their own grassy thoughts, then suddenly careering off at top speed, all of them at exactly the same time.

“So there I was, cheek to bumper with all the other cloven-tired, sun-roof-humped, klaxon-horned metal ungulates, stalled on the concrete plains, watching the hot breath steam from their tailpipes, when the sky blew up.

“I didn’t know if it was terrorists or nuclear war or the Big One that was supposed to drop us all in the Pacific, but it was clearly the end. Huge concussive explosions and fat orange cinders trailing fire out of the sky. Ashes on the windshield. Cars veering off onto the shoulder and me pretty sure I could feel the freeway shake under my Little Brown Datsun. I kept driving, though, because, really, this was what I’d been waiting for all my life: Armageddon.

“Anyway, I finally rolled my window down and looked up and realized it was nothing but the fireworks show at Disneyland. They launch the rockets, apparently, a few feet from the highway and the damned things go off right there over the cars. Some freak atmospheric condition was pushing the debris back down before it completely burned up.

“So that’s where ‘Just Another End of the World’ came from. That thought: If this is really the end, I won’t have to do laundry tomorrow. My rent check will never bounce. Of course it was just one more false alarm, not even a sign from God, only a sign from Unca Walt, in his block of ice under the freeway, and it had no more cosmic message to convey than ‘Hey, look at me.’

“Though I will say this. Once I was over my initial disappointment, it was a hell of a show. The human mind can’t leave something like that alone. It’s always going to read signs and portents wherever it can. And I remember sitting straight back in my seat, both hands on the wheel, and saying, ‘Thank you. I’m glad to be here.’ ”

The Silk and Steel

I meet “Fernando”—not his real name—in a bar called the Silk and Steel on Sunset Boulevard. It’s Monday, the 11th of November, 1996, and he is my first official interview for the book.

It’s chilly and overcast in LA, and even the clouds seem to be rush-ing off to somewhere important. I’m easing into the writing process by going to the people that are publicly available, the ones that I know will be willing to talk to me. “You’ll recognize me,” Fernando has promised on the phone, and he is right. He’s six-foot-three, lavishly tattooed, pierced four times in the right ear, five times in the left, once in the left nostril. He’s shaved his head, but not recently, and he has a soul patch beneath his lower lip.

“This is where it went down,” he says, in a somewhat high-pitched, nasal voice. The walls and ceiling are painted flat black, standard decor on the Strip, and the brown shag carpet has mostly unraveled. Afternoon sunlight trickles in the open back door where a kid in shorts and a baseball cap wheels in cases of beer. It’s the kind of place that needs its darkness. “I thought you should see this,” Fernando says, “because it’s the first place Laurie sang in LA. It was an open mike night, like they do every Monday—they’ll be doing it again tonight. I put her and Summer together that same night.”

Fernando works in one of the better-known Hollywood music stores. “You get jaded,” he says about the job. “A lot of the big tour-ing acts come in when they’re in town. I’ve met Clapton, Page, both Van Halens—all three if you count Valerie. All the hot studio guys, of course. I must see a hundred kids like Laurie every year, coasting into LA in cars that barely made it over the mountains, desperate for a break. They’ve read about the Viper Room in Rolling Stone or they’ve noticed the LA addresses on the backs of their cds, or they’ve seen palm trees in too many mtv videos.”