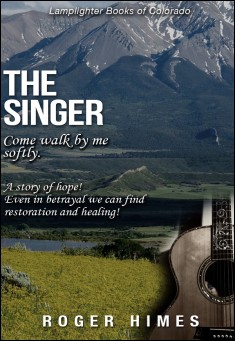 The Singer: Come Walk By Me Softly
By Roger Himes

I write books and articles and am also a composer-singer. This book is unique in that it has a 12-song music soundtrack I composed.

I combined both in this book. It's the story of a big-city lawyer, Scott Bailey, who wants to be THE SINGER. He closes his law practice, in a type of 'mid-life-crisis,' and his family moves to a mountain town in Colorado to pursue his dream of singing. He meets a woman, has an affair, and the story is about restoring their marriage -- with the help of his teenage daughter.

Scott sings all the songs and they follow the story-line of the book, thus giving it more emotional appeal and understanding.

An old song by Peter Paul and Mary says:
"Music speaks louder than words.
It's the whole thing the whole world listens to.
When you sing, people understand."

It had been a long night, but not unlike many others.

Scott hadn’t slept well. He’d tossed and turned a lot. He was up three times, and he was wide awake before the alarm.

He wasn’t worried about the day. He got more and more agitated in his trial work, but it wasn’t because the courtroom worried him. He’d been in law practice now for over 10 years, and he was averaging three or more multi-day trials a month.

Did anybody really like lawyers? Or were lawyers just tools folks used to get what they wanted, whether they deserved it or not? He thought of the line to a song he’d written recently: ‘Fighting hard for selfish justice.’  There was really no such thing, but people frequently pretended like there was.

As he thought about things, it sure seemed to fit. He thought about this song a lot because each line described an element of our social system in much of modern society, and in the United States particularly.

He thought about the famous poet Shakespeare’s comment about lawyers in one of his plays: “The first order of business should be to kill all the lawyers.” Laughing, he recalled the words of Pogo – the cartoon philosopher: “Perhaps we should just shorten their legal pads.” This was a better idea!

Showering, he was amused by what he’d heard about the law being a lot like practicing prostitution. Both lawyers, and prostitutes suffer from the same reality. This is the fact that with both, the value of services rendered drastically declines once those services have been performed!

The jokes were countless, but many of them were accurate.

Scott was thinking about the trial he had this morning. He wasn’t worried about this trial. He was pretty sure he had this one in the bag, although he had been wrong before. He remembered one time when the opposing lawyer proved his client was lying.

The situation had not only been embarrassing, but he lost.

Driving to the courthouse, he thought about one chorus of the three chorus of this song that convicted him the most. Each line described himself, or people he knew personally.

It was actually strange how this song was written. Most songs he writes take a lot of butt-burning work. You sit for hours and get little inspiration. But this wasn’t true with this song. Scott recalled he was actually singing another song when the lyrics to this song started forming in his mind.

The lyrics came so fast he had stop everything and write them down. In not much over an hour, he’d written the entire song – both lyrics and music. As he looked at the intensity and depth of the song, he knew this wasn’t in his own abilities alone as a song writer.

He then realized he was in some way being used as an instrument for something that needed to be said. He didn’t fully understand. Since then, three other songs had come to him the same way. Most of his songs didn’t come so easy, but four of them had.