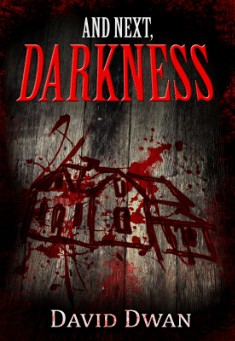 A supernatural thriller revolving around a series of mysterious voices accidentally recorded on an old reel-to-reel tape recorder. Seemingly they are the voices of the dead, lost in limbo, reaching out through the darkness for someone to hear them, to help them find peace.

The story follows the descent of two women into the dark world of a reluctant serial killer as they endeavour to unlock the whereabouts of his victims through in-depth and potentially sanity-shredding analysis of the tapes. And with that discovery they hope to finally lay the tormented dead and their own dwindling sanity to rest.

Fear.  That was the word Dodds had been searching for.  That Woman he had just seen was scared to death of something.  He’d caught that look in her eyes the moment he had looked into them and even at that distance it had been tangible.  It had only been a fleeting glimpse, but it was undeniable, it was a raw almost primal fear.  And if there was one thing Barry Dodds knew about, it was the look of fear in a person’s eyes.

During his twenty five years in the police he had seen it more times than he cared to remember, a gallery of nameless faces he had encountered with numbing regularity down through the years he’d spent on the force.  Victims of violence and hate, loss and cruelty of every imaginable type which he had always viewed with a professional detachment, you had to or you would go insane.  But now that he was entrenched in semi-retirement as a caretaker slash security guard here at Old Mill Studios, a film and TV post production house on the out skirts of Leeds city center.  This had been the last place he’d expected to see that look again.  And it had shaken him.

Dodds had taken the job because the studio was literally a stone’s throw from the flat he shared with his Wife, Debbie.  He could see the building from his front window and so didn’t actually have to be on site the whole night.  The alarms were all hooked up to a monitor in the flat, all the employees had swipe cards so they didn’t need to bother him if they were working late and he would just give the place a cursory patrol every couple of hours if it was empty.  It was an arrangement that suited everyone.  The studio’s owners got a nice reduction on their insurance premium without having to employ a full time security guard and Dodds got a nice supplement to his police pension.

It had been just after midnight then Dodds had looked out of his window to see the building lit up like a Christmas tree, it seemed every light in the place had been switched on.  None of the alarms had been tripped, so whomever it was had to be an employee, but a quick glance at his schedule told Dodds that no late night production work had been planned in.  Which wasn’t that unusual, these film and TV types kept irregular hours at the best of times, so maybe a deadline hadn’t been met which meant some poor soul was burning the midnight oil to finish editing the latest ASDA commercial or whatever masterpiece they were working on at the moment.

Still, just to be sure, Dodds had dragged his bones over to the studios expecting to find half a dozen headless chickens running around the place, but despite the lights on everywhere it seemed deserted.  He had then made a cursory sweep of the lower floor which yielded nothing but empty rooms and so he made his way upstairs to the second floor where the sound department was located.  Again, to coin a phrase, all the lights were on, but no one was home.  Dodds was smiling to himself at the old joke when he passed a large sound recording studio, he glanced through a door left ajar which he saw led to the mixing desk/control room and beyond that the recording studio itself visible through a large observation window.

And there she was, standing in the middle of the studio, staring blankly ahead with her arms wrapped around herself as if for warm.  It took Dodds a few moments to recognize the woman, who was in her mid-forties and although she was inside and it was the height of summer she still had on her long black coat.  What was her name?  Dodds racked his sleep deprived brain, something Welsh.  Bromlyn, that was it, she was the head of the sound department if memory served.  He came into the control room and was about to go through into the recording studio itself and announce himself when something about the look on her face made him stop.  Now that he was in the room he could see she wasn’t actually staring off into space but was looking at a small old fashioned reel-to-reel tape recorder sitting on the table in front of her.  She seemed transfixed by the spinning reels, her brow knitted in deep concentration.

He must have moved because she suddenly caught sight of him through the window out of the corner of her eye and she screamed out loud, or so it looked to Dodds who suddenly found himself glad the booth was sound proof.  Judging by her face it was a full bodied scream of terror.  Dodds tried to laugh as casually as he could muster at having startled her, he held up a hand in greeting and shrugged apologetically at nearly causing the poor Woman a heart attack, but the smile fell right off his face when he looked into her eyes, he gave an involuntary shudder.  Yes, there is was, fear.  This woman was terrified of something.  It was as if she had been listening to the devil Himself on that antiquated tape recorder.  And Dodds knew in that brief instant why she had turned all the lights on, for comfort.  That childish need to banish the dark and what monsters may lurk within.

The spell broken, Bromlyn frantically looked around her surroundings as if re-orientating herself, then remembering where she was she quickly grabbed the tape from the reel-to-reel player, stuffed it into a large canvas bag and left through the back door at the other end of the studio without a word.

Dodds stood there for a full half minute staring thought the partition at the empty studio.  He refocused his eyes and looked at his reflection in the glass.  “Weird,” he said to it.  That seemed to sum things up perfectly.

Of course, if he'd known then that he was to be the last person to see her before she vanished off the face of the earth, he would have thought of something more profound to say.