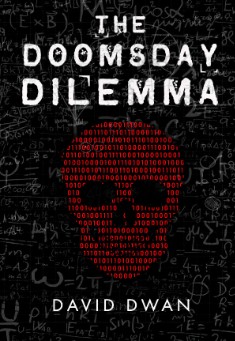 The Doomsday Dilemma
By David Dwan

Security guard Peter Harper awakes in a strange room, covered in blood from a catastrophic head wound, with no recollection how he got there.

But he is not alone. He is the ‘guest’ of the mysterious Doctor Logan. A research scientist at the shadowy Government funded Ventrex labs where Harper works.

Harper is there to bear witness to a terrible and wonderful revelation Doctor Logan has for the world. But whether Logan’s intentions are for the good of humanity only time will tell.

A small well-meaning group of Eco-activists believe that with their help, Logan is about to expose the illegal covert bio-weapons research he has been involved with at Ventrex. It will topple the Government. To them Logan is a hero. But Peter Harper is not so sure.

Upon finally regaining consciousness, the first thing Peter Harper became aware of was that someone seemed to be drilling a hole into the top of his head.  Searing pain shot through his brain like a bullet repeatedly ricocheting off the inside of his skull, followed by a slow creeping tinnitus, which started in low, but was soon up to a mile passed deafening.

Harper opened his eyes as best he could but just couldn’t get his eyes to focus on anything around him, he could have been in a coffin or a concert hall for all he knew.  He moved a little but was greeted with a tsunami of nausea for his efforts which threatened to knock him right out again.  He mumbled something but the whole right side of his face was numb.  Just like when he’d had his wisdom teeth out.

“F***...”  Harper spat, and again was hit with nausea.  He tried in vain to gather his thoughts.  What the hell had happened?  It seemed impossible, but the pain was worsening by the second.  A shape moved in front of him, his sight was so poor it could have been anything.  Harper tried to speak again but his pain-addled brain couldn’t formulate the words into any coherent order, his mouth now felt like it was crammed full of marbles, threatening to choke him if he breathed too deeply.

Mercifully, the shape seemed to know what he was trying to say.“Ssh,” it whispered above the screaming in his head.  “I’ve got something for the pain.”  Thank Christ.  Harper motioned with his hand that it was his head.   “No, don’t.”  The blur warned harshly.
“Careful, wait, wait, wait don’t touch it whatever you do.  Try not to move so much.  Hold on a sec’.  Here we go, take this, open wide.”

The shape put what felt like a pill on Harper’s swollen tongue and he gratefully swallowed it.  He closed his eyes and tried to regulate his breathing.  “That’s good,” said the shape sounding like it was speaking under water.  “Just try and relax, it won’t take long, it’s very powerful.  That’s it.  If you need to, there’s a table just in front of you, lean forwards a little.  There you go.”

Harper blindly reached out and was surprised that the table was only a couple of feet or so away, he gripped on to the wood and miraculously, within only a few seconds the wonder drug started to kick in.  The pain slowly lost its edge, then melted away altogether, as did the ringing in his ears and he could finally hear his own ragged breathing.

“Oh, Jesus, better, so much better, thank you, thank you,” he replied.  He looked up, adjusting his eyes to the light as part of his vision began to return somewhat.  He found he could see better through his left eye, although it refused to offer anything other than soft focus, but his right was like looking through petrol in a glass full of water, all multi-coloured swirls and shifting focus.  He had been concussed once before, when he was a kid, and it had felt and looked a little like this.

A young Peter Harper had fallen off his bike and cracked his head on the pavement aged twelve, and that had earned him a night in hospital and he still had a vivid memory how it had messed with his sight, just like now.  “I’ve been in an accident.”  He said plainly.

The shape sat down at the table opposite and once he was still, his features finally came in to some semblance of focus.  He was a man, who looked to be in his mid-sixties he was casually dressed in an open necked white shirt and had a neatly trimmed grey beard, through which he was smiling benevolently.  Harper knew the man from somewhere but couldn’t quite place him.  He didn’t answer, but began studying Harper intently.

“I’ve taken a whack to the head.”  Harper slurred, at which the man cracked a grin.

“Huh?  Oh, a whack?  A whack and then some, I’d say.”  He replied cheerfully. “It’s amazing you’re conscious at all, let along talking.  How’s the pain now?”

“All but gone, thank you.”  Harper looked around; he was in a rustic looking room, complete with oak beams and an open fireplace.  “Where am I?  This isn’t a hospital.”

“Don’t you remember anything about what happened to you?” The man asked. Harper tried to think, but the combination of the drug and his head injury clouded his thoughts, making it increasingly hard for him to concentrate on anything but how good he felt all of a sudden, and he silently thanked the wonders of modern medicine.  Still, he tried; He remembered getting to work at the lab as normal, where he worked as a security guard, so a road accident on the way was out of the question.  But after that, nothing.