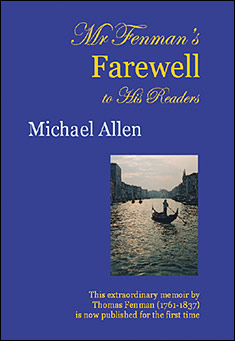 Mr Fenman's Farewell to His Readers
By Michael Allen

Who was the mysterious Madame de Mentou? And what was her real name? These are the questions which the writer Thomas Fenman addresses in a brief memoir which was written a few months before his death.

Fenman, who lived from 1761-1837, had a long and successful career as a novelist. But, although famous and widely read in his day, he was soon forgotten after his death. Now his puzzling memoir is made available for the first time.

As you will see when you come to read the memoir (if you have not done so already), Fenman provides some autobio-graphical details himself. I shall try not to repeat too much of that here. But there are some other details which I have obtained from his obituary, and from one other source.

The newspaper cutting that came with Fenman’s note-book proved to be a clipping from an 1837 issue of the Peterborough Citizen and Advertiser. This carried a report of Fenman’s death in Venice, and provided some account ofhis life.

As Fenman himself relates, he was born in Northampton-shire, the son of a country Vicar. His father died when he was young, and he was sent to school, as a boarder, in the nearby town of Oundle. Subsequently he attended Queens’ College, Cambridge. A short period as a schoolteacher in Norwich followed.

At the age of twenty-three, however, Fenman’s life was transformed as a result of a substantial legacy. This gave him an assured income, and enabled him to embark on the kind of ‘grand tour’ of Europe which was often undertaken by the sons of wealthy families.

Fenman’s memoir makes it abundantly clear that he had for some time had the ambition to be a novelist, and he re-lates how, in the winter of 1786/87, while staying in Venice, he completed his first novel. He was helped in this by the mysterious Madame de Mentou, who is the central figure in the memoir.

On his return to England, Fenman set up a publishing re-lationship, which appears to have lasted more or less un-changed for the next fifty years. He returned to Northamptonshire, where he eventually bought a large house in Oundle. (The house still stands, and is currently owned by Oundle School.) Here Fenman lived for the rest of his days.

Most of his time was spent in writing, and the catalogue of the British Library reveals that he did indeed, as he claimed, write a hundred novels. He himself gives us the flavour of these books, and describes what motivated him to write them, so we do not need to consider that here.

But Thomas Fenman was also, according to the Peterbor-ough Citizen and Advertiser, a great countryman, spending many hours walking or riding in the local countryside. He was a keen angler, and was renowned as a pike fisherman, with several catches of over twenty pounds.

Fenman’s career as a writer is now almost completely ob-scure. Although he had no need to earn an income from writing, he never set out to be anything other than a popular novelist, aiming his work at schoolboys and students, plus the less discerning members of the middle-class readership. His books seem to have been particularly popular in the commercial lending libraries, which were an increasingly important factor in publishing in his active years.

Few references to Fenman can be found in the histories of the English novel, though James Staveley-Wilson, in his 1953 survey of early English fiction, makes the point that Fenman’s name seldom occurs in the prestigious literary journals of his day; and when he is mentioned, the tone is invariably disparaging.

The Birth of Tippy Gnu

by Tippy Gnu I believe autobiographies include too much information, so I’ve made mine very abbreviated. I see no need to inclu......

by Elizabeth Bernhardt Pinson Elizabeth B. Pinson shares with us her memories of Alaska's emergence into a new and modern era, bearing witness to......