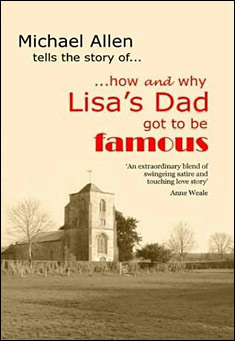 Free book: How and why Lisa's Dad got to be famous
By Michael Allen

Harry is a divorced man who has not been able to see his daughter Lisa since she was five years old. But Harry still loves Lisa more than anyone else in the world; and he worries about her future because she was born without a left foot. When Harry is offered the chance to win a million pounds for Lisa, by taking part in a reality TV show, he immediately accepts. All he has to do is find a woman who is willing to risk her life for him - and he has just three months to do it.

"An extraordinary blend of swingeing satire and touching love story. It's not often a novel is so compelling that I wolf it down in one day." Anne Weale, bestselling author of "Time and Chance"

Hello Lisa. This is for you.

And hello to everyone else too.

Lisa is my daughter. I don’t see her as much as I’d like because she lives with her Mum. We used to be married, Lisa’s Mum and me, but now we’re not.

Lisa is still quite young. She’s eight now. Seven when this business started. She’s a bit too young to understand all of this just yet. But one day she’ll be grown up, and when she is I want her to be able to read this story. If I’m not around to tell her myself.

Of course, Lisa may understand more than I think, al-ready. They grow up quick these days. And I know she’s seen all the TV shows – even when they first went out, late at night. But there’ve been a lot of lies and foolishness printed about me and Debbie, and I don’t want her to believe all that.

And there haven’t been just stories in the papers, either. There’ve been books and CDs and DVDs and documenta-ries, and endless stuff like that. Con tells me there have even been pirate copies of the TV programmes. Which means that people are selling the TV series without paying the company a fee. They sell them in the Far East, and Africa. It’s very big in Africa.

So there’s been a lot of fuss and – well, nonsense. So I want Lisa to know what really happened.

This is my side of the story. The true story.

I sometimes wonder how my life would have gone if I’d never met Con McDonald. Would it have been better, or worse?

One thing is sure: if I hadn’t met Con I would never have got around to asking Debbie to go out with me. For a start I thought she was too good for me. And she’s so beautiful that I was sure she would be living with someone else. So I suppose I owe Con a favour for that.

Con kind of introduced himself to me one horrible night in November, the year before last.
The twenty-second it was. Twenty-second of November 2010. I’m not likely to forget it.

He’s a very determined man, is Con. Persistent, clever, and good with people. Well, he’s had a lot of practice. That particular night Con had one thing on his mind. And when Con sets his mind to something it usually gets done. As for me, all I wanted to do that night was get home, go to bed, and pull the blankets over my head.

I’d gone over to Bristol to see a specialist. It’s a fair old way to Bristol. When I came out of the clinic, I found it was raining, so I pulled a woolly cap down over my ears. And then I set off for the van.

I suppose I heard the clinic door bang for a second time as I was walking along, but I didn’t pay much attention to it. The doctor had given me a lot to think about.

And then this bloke appeared beside me. Short, and a bit tubby. Not much hair. He was wearing jeans and a leather jacket.

‘Fancy a drink, Harry?’ he said. ‘I could do with one myself. I’ve been in the clinic too, like you.’

It never occurred to me to ask how he knew my name. As I said, I was a bit worried at the time, so I just assumed that he’d heard a nurse mention my name or something. Or perhaps we’d played darts and he remembered me from that.

Anyway, I certainly didn’t want a drink. ‘No thanks,’ I said. And kept walking.