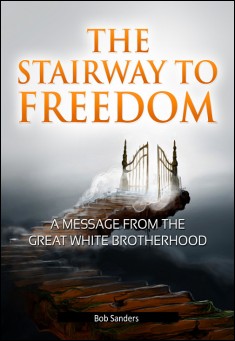 Free book: The Stairway To Freedom
By Bob Sanders

Dictated from the spirit world, this is a complete primer of esoteric knowledge covering virtually every aspect of a human being’s development whilst here in incarnation and also will see him through his life in the spiritual realms as he progresses towards God.

The book cleverly weaves all these, apparently, disparate elements into a cohesive whole so that the student can have a firm grasp on the way that life operates whilst incarnate here on Earth and will help guide him through that life, and also what awaits him when this incarnation is finished and he returns to his true home, the spirit realms.

There are also a couple of prayers that were dictated from the spirit world, some guided meditations and, lastly, a number of questions and answers that were asked of the Brotherhood on a variety of topics.

Although it is a book on spirituality, it offers a lot of practical information relevant to the problems that people face in their daily lives. The Brotherhood all had incarnations here on Earth at some stage and so have first hand knowledge of the difficulties that we face.  It is not a remote, academic book just dealing with what is God.  It is written in simple, if precise, language and all people will find that they can connect to the information presented in the various chapters.

It is hoped that the information will change your life.

The Great White Brotherhood is a group of people who claim to have lived an incarnation here on Earth, have since passed on to what is sometimes called Heaven, or the spirit realms, and have decided to come back close to Earth to pass on their knowledge to us who are incarnate at the moment. They, the brotherhood, are at various levels of spiritual advancement, some far removed from the low vibrations that we experience on Earth, others not so advanced. They join their thoughts together in a chain, passing information from one to another, from highest to lowest, until, finally, the information is implanted into the mind of someone on the Earth plane who has been trained to receive such information.

In this case, it was I. I must stress, at this point, that I have no special qualifications to be part of the brotherhood except that I was chosen by them many years ago among many others, no doubt, to permit them to work on Earth because, as they are spirit and have no physical bodies, they cannot directly communicate with the majority of the population incarnate on Earth. Thus, I was trained to become clairaudient, which is quite simply the ability to receive information in my mind sent from the mind of someone else. This enables a message or information to be sent from them through me to the person for whom the message is intended.

In principle, it is quite simple. I try to clear my mind of any thoughts coming from me, open a channel to them, who do the same, and the information flows. I hear the information as if I was talking to myself in my head except that I have no idea, in advance, of the contents of the information being transmitted. I try to capture the thoughts as clearly as I can and pass them on as required.

I would strongly advise anyone who wishes to develop the gifts of the spirit, as they are called, not to do so without the help of competent and qualified teachers as it can be extremely dangerous. The reason is that if one opens one’s mind into the astral realms, one is almost sure to attract the attention of a force in the low astral realm that would be of evil intent. The result could be catastrophic for that person. The low astral plane is full of horrible thought forms, plus creatures designed by nature to live there and also the dregs of humanity who have died and are stuck in that plane. Unfortunately, to reach the true spiritual realms, one has first to pass through that low astral plane. With protection, one can achieve this. Without protection, one would be exposed to any and all of these horrible manifestations. You would not wish to be a victim of these forces. So, I repeat, do not try to develop the gifts without proper training and protection. The technique for attracting teachers and for developing the gifts is fully described in the book so I will not repeat it here.

At the time when this book was being transmitted to me in the 1980s, Internet did not exist as far as the public was concerned and so, although everybody had heard of visitors from space, etcetera, very little information about them was available. The White Brotherhood flatly refused to talk to me about them and so it is only recently that I have found out that there are, apparently, groups of people from other planets, star systems, or dimensions that are here to help us in a similar manner to that of the brotherhood. Whether the intent of these people is truly spiritual, I cannot say. Whether they coordinate their efforts with the brotherhood, I do not know. Certainly, the message is very similar but we should sift the information given with caution, accepting only that which rings true in our hearts and rejecting that which seems doubtful.

This book, “The Stairway To Freedom”, was dictated to me over a period of months, starting in 1980. I was asked to make it freely available to the public so I tried to have it published at that time without success. So I shelved the idea, waiting until an alternative means of presenting information to everybody became available. The time is now ripe. The information contained in this book is as valid now as when it was presented to me and, thanks to the Internet, it can be presented to you for free all over the world.

I have recently been pushed by the brotherhood to take the necessary steps to give you this information. You may make of it what you will. From experience, I know that you will react in one of three ways. Some will read the first page or two and turn to other more appealing activities. Others will be scandalised and do all in their power to deny the validity of the information. The third group will find that the book quite simply changes their lives.

To those in the first group, I say, be patient. One day, you will be ready for this. To those in the second group, I say that I understand. For information to be accepted by the mind, pigeonholes have to be made for that information to be placed within. If you do not yet have a pigeonhole made for that type of information, you have no choice but to reject such information. Do not blame yourself. It is perfectly natural. One day, perhaps you too will be able to accept the truth presented to you in this publication. To the last group, I say, welcome.

Join with us if you wish. Join the brotherhood and by following the precepts presented in the book, follow the advice peacefully and calmly and with patience. You do not have to play an active role if you are not ready. By the simple act of prayer, meditation, and service to your fellow man, you will be acting in harmony with the brotherhood and helping to reduce the hatred and violence in the world.

The Path of Mankind

by Bob Sanders The field of esoteric knowledge is vast and complex.  Its effect on humanity has been accepted and rejected by grou......

by Candy Ray This is an account of Candy Ray's six past lives, and the times in between them. Candy Ray has been a demon daugh......