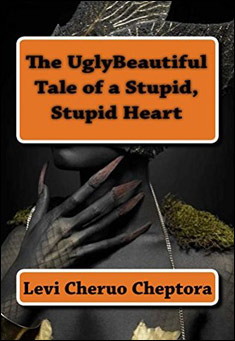 The Ugly Beautiful Tale of a Stupid, Stupid Heart: When Mother Hen Eats her Grownup Chicks
By Levi Cheruo Cheptora

Set in contemporary Kenya, this Novel makes us retake a sober walk down the memory lane ... without wearing prejudiced tribal goggles, we can see the nakedness of unaddressed social injustices, and realize how such vices continue tearing Kenyans apart.

Oftentimes, the world has been treated to barbaric, savage, and horrific scenes thanks to the so-called ethnic and tribal clashes in Kenya (specially so prior to, during, and after electioneering period). The world has been quick to judge and dismiss such archaic clashes, yet few have been keen on answering the all-important question: why, almost half a decade on after independence, do Kenyans still fight each other?

The UglyBeautiful Tale of a Stupid, Stupid Heart has attempted to give an authentic answer to this question.

Tribalism is not inherently an African problem. The British Imperial 'Divide and Rule' policy in our case as a country is largely to blame for the reigning whims of tribal animosities among major tribes such as the Agikuyu, the Luo, the Kamba, the Mijikenda, the Abaluhya, and the Kalenjin. Coupled with half-hearted attempts (and at times outright ignorance) by successive government regimes to address historical social injustices both inherited from the British Imperial Regime, and the Independence Totalitarian regime of Kenyatta, taming negative ethnicity and tribal strives has never been an easy task.

2007/2008 Post Election Violence is just one of the many fruits of such failures. And so is the emergence of outlawed gangs such as Mungiki, Chingororo, Bagdad Boys, Kamjesh, and recently, Sabaot Land Defense Force.

However, there are exceptional cases as espoused by David, a Kalenjin, and Wairimu, a Kikuyu (whose two tribes fought over 2007 contested elections). The duo fall in love and stick to their marital vows despite the mutual hatred and deep-seated suspicion shared by their respective tribes. In the end, love conquers and there is hope for a tribeless Kenya.

Constitution and Government of the United Kingdom

by Wikibooks This free book comprises two parts, the first is the political history of all monarchs in succession. The second part of......

An Easy Route to Peace

by Roy T James Why is our society always in a state of boil? A small perturbation can lead to a world war, which could exterminate the......