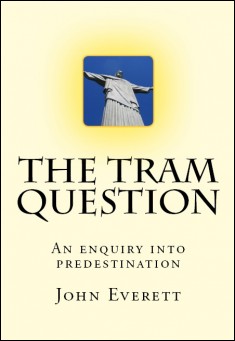 Free book: An Enquiry Into Predestination: The Tram Question
By John Everett

What does the Bible actually teach about predestination? This book aims to get you thinking about an issue that poses many important questions. The title is suggested by the limerick:

There was a young man who said "Damn!
I perceive with regret that I am
But a creature that moves
In predestinate grooves
I'm not even a bus, I'm a tram."

Is this merely humorous, or does it express the truth about us as humans?

Predestination is hardly a topic one hears referred to in conversation very often these days. I cannot remember ever hearing a sermon dedicated to it. It may be that I am moving as a Christian in the wrong circles. And I certainly cannot understand why the topic has begun to absorb me.

The more I think about it the more, however, I realise that it raises extremely important questions. Is it right to speak of 'the elect'? What is the salvation that is offered to us? What of those who are outside this salvation? In what way should we speak of the sovereignty of God? What is God's relationship with time? To name but a few.

So I have been researching the subject for several months now, and feel impelled to record what I am beginning to discover, from the Bible, from the history of Christian thought, and how my mind is trying to resolve some of the puzzling issues that the topic raises.

This book is by no means academic. I do not begin with the purpose of defending a particular position, although I know that for some the issues are considered vital to their theology.

If the book helps the reader to clarify (or simply instigate) their own thinking, well and good.

This passage from the Acts of the Apostles brings us straight to the central issue of predestination. God's purposes are foreordained. Peter and John have been forbidden to proclaim the resurrection of Jesus by the Jewish rulers in Jerusalem. This is how they responded:

Being let go, they came to their own company and reported all that the chief priests and the elders had said to them. When they heard it, they lifted up their voice to God with one accord, and said, “O Lord, you are God, who made the heaven, the earth, the sea, and all that is in them; who by the mouth of your servant, David, said,

‘Why do the nations rage,
and the peoples plot a vain thing?
The kings of the earth take a stand,
and the rulers take council together,
against the Lord, and against his Christ.’

“For truly, both Herod and Pontius Pilate, with the Gentiles and the people of Israel, were gathered together against your holy servant, Jesus, whom you anointed, to do whatever your hand and your council foreordained to happen. Now, Lord, look at their threats, and grant to your servants to speak your word with all boldness, while you stretch out your hand to heal; and that signs and wonders may be done through the name of your holy Servant Jesus.” (Acts 4:23-30)

Here we have it: what happened to Jesus on the cross was foreordained. The local tetrarch Herod and the Roman governor Pontius Pilate were doing what God had planned for them to do. There are many indications in the gospels that Jesus knew precisely what fate awaited him as he made his last journey to Jerusalem. He knew what God's plan was.

We are just beginning to address the problem here. Were Herod and Pontius Pilate free agents? Could they have acted other than they did? Does God actually, in some kind of eternal 'now', have a view of all the actions and events that, from our perspective, are not only past and present but also future?
This is the area that I hope to explore in the pages that follow. Each question that we ask seems to raise further questions, all of them focusing on what it means to be a Christian.

The passage cited in the previous chapter raises lots of questions about the relationship God has with time. We experience time in a linear fashion. There is the now, there has been a past, and there will be a future. Our knowledge of the now is by being awake and receiving all the stimuli we are used to. We are aware of what we are thinking. Our consciousness is embedded in the present. We can remember the past, even though not always perfectly. We can imagine the future, with acknowledged uncertainty. It seems, however, that with God things are different. Let us look at a few passages from the Bible about this.

Blessed be the God and Father of our Lord Jesus Christ, who has blessed us with every spiritual blessing in the heavenly places in Christ; even as he chose us in him before the foundation of the world, that we would be holy and without defect before him in love; having predestined us for adoption as children through Jesus Christ to himself, according to the good pleasure of his desire, to the praise of the glory of his grace, by which he freely gave us favour in the Beloved. (Ephesians 1:3-6)
Something took place 'before the foundation of the world' which affects my own now, my own past, my own future, and that of every one of us. Let us check out this phrase. Peter uses it here:

You were redeemed, not with corruptible things, with silver or gold, . . . but with precious blood, as of a faultless and pure lamb, the blood of Christ; who was foreknown indeed before the foundation of the world, but was revealed at the end of times for your sake. (1 Peter 1:18-20)

And again here:
All who dwell on the earth will worship him, [the evil beast] everyone whose name has not been written from the foundation of the world in the book of life of the Lamb who has been killed. (Revelation 13:8)

And here:
The beast that you saw was, and is not; and is about to come up out of the abyss and to go into destruction. Those who dwell on the earth and whose names have not been written in the book of life from the foundation of the world will marvel when they see that the beast was, and is not, and shall be present. (Revelation 17:8)

The 'book of life' is another phrase we need to think about. It seems that to have one's name written in the 'book of life' is the equivalent of being adopted into God's family, which is the important category that Paul has used in the passage quoted above when he wrote to the Ephesian Christians.

The Psalmist prays about evildoers:

Let them be blotted out of the book of life, and not be written with the righteous. (Psalm 69:28)
Writing to the Philippians Paul says:

Yes, I beg you also, true partner, help these women, for they laboured with me in the Good News, with Clement also, and the rest of my fellow workers, whose names are in the book of life.(Philippians 4:3)

We have already noted two passages from the book of Revelation. Here is a third:

He who overcomes will be arrayed in white garments, and I will in no way blot his name out of the book of life, and I will confess his name before my Father, and before his angels. (Revelation 3:5)

These passages are unequivocal, and establish a very clear Biblical basis for the doctrine of predestination. From the very beginning of time God has known who would become part of his family, and – metaphorically no doubt – has had their names inscribed in a book.

There is another key word we need to think more about, again from the Ephesians passage, and that is 'chose'. We Christians have been chosen by God. What does this actually mean? It is worth a whole chapter to itself.

Resident Skeptic -- POSTMODERNISM BORN OUT OF DUE SEASON

by James R Cowles I was raised a fundamentalist Baptist, and eventually migrated to conservative, but non-fundamentalist, Protestantism. O......

by John Everett This is a continuous account of the life and teaching of Jesus Christ using the four gospels (in a modern translation) i......