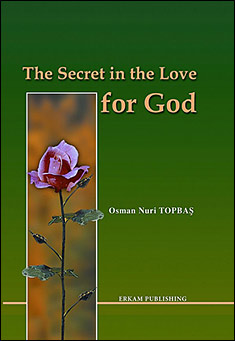 Free book: The Secret in the Love for God
Author: Osman Nuri Topbas

The greatest fruit of the blessing of faith is to look at creation with the eyes of the Creator and to approach all creatures with love. This elevates the life of a human being to higher levels and causes him or her to enter a world of forgiveness, mercy and love. One can then spread love and mercy to all creation.

Mercy is a fire that is never extinguished in the heart of a Muslim. In this world, it is the distinguishing essence of being human which leads us through the heart to union with our Lord.... A believer is always on the first line of every struggle which bestows peace to the hearts of others.

One of the most prominent attributes of the hidden treasure mentioned in the saying “I was a secret treasure. I wanted to be known and so I created creation” is absolute grace. Allah Almighty did not desire this mysterious, infinite and imperceptible grace to be concealed, so He created creation.

A small drop of His infinite love was granted to this universe and to this earth. Thus, the earth gained superiority over other creations; Allah also created the human being, the most honorable creature, from the earth.

Allah, who created all creatures with love, made them a sign of His artistry and perfection. The existence of the human being as a divine masterpiece has become the perfect manifestation of love and kindness. For the purpose of this world’s creation was not solely to adorn it with green fields, valleys, vast deserts and mountains; it was the human being – the spring of love and the quintessence of creation. For that reason, the honor of a human being is in direct proportion his preserving this objective of his own creation.

Furthermore, since the reason for creation is love, the attribute of love is present as a natural inclination in all creatures. Even a scorpion’s conveyance of its offspring on its back is the result of this love.

This inclination of love is at its peak in a human being, the most honorable of creatures. Nevertheless, in this world filled with trials and tribulations, man will obtain the reward of his love to the extent of the worthiness of his beloved. This means that the human heart, created with the ability of infinite love, can only reach perfection if its possessor directs his tendency towards love of Allah. He cannot help himself by pursuing inferior and useless goals – ultimately life would end in disappointment. In other words, only as long as man devotes to Allah and those beloved to Him his natural tendency to love, can he acquire the blessing to ascend spiritually to the extent of his devotion.

Indeed, divine tests inflicted upon a human being depend upon how he directs his love. It is because of this rule that Allah granted human nature negative inclinations as well as positive ones. Allah has granted human beings a share of his three great attributes: 1) absolute existence, 2) absolute grace and 3) absolute good; but He has also impaired him with the opposites of these attributes: 1) absolute non-existence, 2) absolute ugliness and 3) absolute evil. In this context, the Qur’an says: “And He inspired it (the soul) [with conscience of] what is wrong for it and what is right for it.” (Shams, 91:8)

Is This The Kingdom of God?

by Brian E. R. Limmer What constitutes a Kingdom? To belong to the Animal Kingdom, you have to be an animal. Likewise, only plants can be a......

by Dickson O. Adelusi This book is written for all souls caged in flesh, called humans, to enlighten them about the world before they came int......