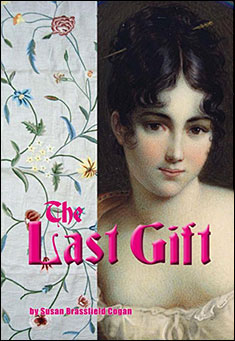 In 1792, Paris is in flames and the hungry guillotine waits . . . . In The Last Gift, the reader is woven into the fabric of the French Revolution, one of the most chaotic and violent social upheavals of all time. Strong and resourceful heroines, an intrepid hero and a complex and terrifying nemesis are ingredients in a tale of passionate love, bright courage and dark revenge that carries the reader from the royal palace to the shadow of the guillotine.

Marie could hear sporadic gunfire sputtering in the distance behind her. Fear lent her speed as she plunged down the empty passageway, lit only by moonlight through cur-tained windows, and past unused furniture and gilded mirrors draped with dusty silk. The voluminous court gown slowed her down and her high-heeled slippers, fashionably too small for her feet, weren’t any help. She was only the keeper of per-fumes, a mere servant—not an aristocrat. But the street scum—they called them-selves the Paris Commune—would see the yards of pale blue silk in her gown and the rope of pearls at her throat, and they would not ask for her lineage. She knew this because she had once been one of them—and soon would be again—if the Swiss Guards could keep the Communards from entering the Tuileries long enough for one insignificant servant to slip away.

La Comtesse de Passy, Marie’s employer, was dead. At sunset, the old woman had tried to escape the palace in a closed carriage. The mob had stopped them, very much afraid that the royal family would again take flight. Marie watched from a window as La Passy was dragged out screaming, to be engulfed by the crowd. Marie hated the aristocrats almost as much as did the people of Paris but she pitied that helpless old woman who had been kind to her—for an aristocrat. Marie sincerely hoped that Le Duc de Fallieres, La Passy’s nephew, had not escaped. He had been disguised as the carriage driver. When the mob surrounded them, he jumped down and disappeared into the crowd. By then, twilight was gathering and she couldn’t tell what happened to him. He was a filthy beast who deserved far worse than the guillotine. But La Passy was a harmless dowager with a penchant for younger men. She deserved a less horrifying end.

Marie was glad she would no longer have to avoid Fallieres and his casual but persistent advances. If she had been forced to reject him openly, she was certain to have lost her position. To accept would have been far worse. What he did with young ladies was whispered among all the servants. Rumor had it that one girl had even cut her wrists after a night with him. Marie had never sought details of his perversions—she didn’t need to know them. The look in his heavy-lidded eyes was enough. She dearly hoped that he was dead now or would be soon.

Marie shook herself and ran on. All of that was over now and she was deter-mined not to share the old Comtesse’s fate. It was time to go.

The instinct for survival was strong in her. It was the reason she had managed the transformation from barefoot urchin in the streets of Paris to a keeper of per-fumes for a lady of the royal court.

Her footsteps echoed hollowly in the empty passageway. This way was rarely used, except as a servants’ shortcut, but somewhere a small side door opened onto the gardens.

Marie paused for a moment to catch her breath. Sounds of shooting were faint now—she could barely hear them over her own ragged breath. She strained her ears to catch the sound of anyone approaching. The passageway smelled of dampness and dust and very faintly a hint of—smoke? Was the Tuileries on fire? It wouldn’t surprise her.