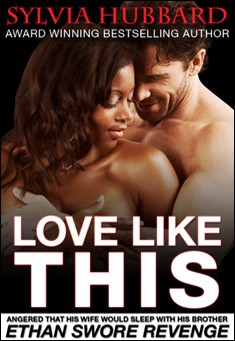 Excerpt: Cleo allowed her to borrow her car to make it to the Parker Mills office. She was impressed by the building and the courtesy area. The secretary led her to a large conference room that seated ten people very comfortably. She was seated at the first chair by the head seat. When offered something to drink, she declined politely because her stomach was doing flips like a Sea World dolphin.

The three-piece dark brown rayon suit she had borrowed from Cleo was two sizes too big for her. But with a lot of pins, they'd gotten the size twelve suit down to look very professional on her. Cleo had swept her hair up into a fashionable bob and applied a light touch of makeup. The black patent leather heels were pretty weird to wear, but she managed. If she walked slowly, she actually looked like she knew what she was doing. Underneath the vest, she wore a white French cuffed blouse.

Yesterday had been her birthday and she celebrated it by sitting by Nanna's side. Again Cleo had come to the hospital to tag team with her on Nanna's vigil. She didn't trust anyone to stay beside Nanna other than Cleo and she was glad Cleo was there for her.

Focusing her thoughts, she concentrated on making her best presentation to Parker Mills. According to James, when he put it bluntly, Parker Mills was a serious ass, but he loved deals. He lived for them and he was an old high school buddy of Ethan Black. He had inherited the laundry business from his father and had taken over several cleaners in the Detroit and suburban areas. He did a lot of services for business, but was looking into privately held residential businesses to expand. She was very impressed with the information James had given her about the company. It would be an honor to meet the man in person and learn from him if he gave her the chance.
James warned her that Parker Mills could smell bulls**t instantly and he didn't play when it came to money owed to him. If she stayed honest and truthful and stayed realistic, she had a chance.

When the doors to the conference opened, it came quite a surprise to see that Parker Mills was an African American male who looked no older than about twenty-nine. He walked like there was a stick up his ass and with the bi-focals and stiff three-piece dark grey Armani suit, he was definitely the stiff prick James had described. This was the first time she had met anyone of African American nature who possessed so much money, and she knew this would be an even bigger challenge than what she had thought it would be.

She could have handled it better if he was white and on top of that, he was very handsome if one looked past those awful glasses. He regarded her nonchalantly as he closed the door and told his secretary not to bother him until he was done. That made her feel very important and she hoped this was going to go better than what she thought it would go. He approached the conference table, looking a little doubtful as he assessed her. Nicole saw that he stood about six feet tall and bullock under the suit. She didn't know if it was fat or just muscle. But either way, the suit was definitely tailored rather nicely on him. "Ms. Gray?" he seemed doubtful."Yes, Nicole Gray." She shook his hand. He seemed off guard and his chocolate eyes squinted at her. "You look familiar.""I'm often mistaken for my mother, Lynne Black." This relaxed him immensely. "Yes, she sometimes comes with your uncle, Marvin Clark. You're almost a living image of her, but I must say there is something magnificent about you."He offered her a seat and he followed suit, straightening up his clothes beside her. "Mr. Mills, before we begin I want to say how much I appreciate you taking the time out for me on such short notice. A man such as you probably remains busy and I am very impressed by all you hold."He nodded a thank you."That's why I want you to understand that I don't want to sell the Laundromat to you. I want to remain a partner."He sat back, still listening intently, but showing absolutely no emotion.