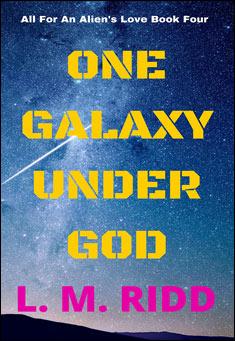 One Galaxy Under God.
By L. M. Ridd

All For An Alien's Love: Book 4

Eight-year-old Jimmy Donaldson has no idea that the man who rescued him from his brutal foster parents is an alien from another galaxy. All he knows is that he wants to be reunited with his sister, Cassia. Unfortunately, such is not to be the case. The alien, Kaanig Dammen Altair, supreme ruler of the galaxy of Valtor, has other plans for both James and his sister before he will allow them to reunite.

Kaanig Altair, having taken personal responsibility for what has happened because of a promise made to the children's dying father, takes Jimmy under his wing, raising the boy as a member of his own family. Jimmy is given every consideration and all the military training and education one would expect of a future H'San warrior. Jimmy is quick to demonstrate unusual acrobatic fighting skills such as never has been seen before in an imperial. Cassia, meanwhile, is still on Earth - Zarak - and confined to a mental institution, having been blamed for the supposed murder of her brother.

Due to his exemplary training, Jimmy is more mature than most boys his age. When he later meets the lovely Jaada Gellon, he falls hard for her, vowing to join with her when the Altair finally allows it.

Jaada, meanwhile, has problems of her own. Her uncommon beauty invites unwanted attention from others that puts her in danger at various levels. When the Altair is forced to protect her, for Jimmy's sake, he soon finds his hands full when Jimmy, too, suddenly finds himself the target of violent men who feel threatened by the young man's incredible talents and position in the galaxy.

Only when Jimmy and Jaada have demonstrated their loyalty and lasting affection for one another will Dammen allow them to permanently join, the problem being that neither may survive long enough for that to happen.

Jimmy hadn't been in school for several solarities, and Jaada wondered why. When he finally appeared, her whole countenance lit up. From where she stood in the hallway by her locker, she observed his large frame moving down the hall. He hadn't noticed her yet, so it gave her a moment to study his exceptional physique, the golden blond hair shagged loosely about his lean face, and the well-muscled forearms hanging on him. Dressed in warrior's togs and black Kathian boots, he was extraordinarily sexy, as evidenced by the looks of longing every female in the corridor was casting in his direction. He looked like some wild man from Vultron, yet Jaada knew he was the kindest person she had ever met.

"Jaada," he called, spying her. He made toward her, only to suddenly be intercepted by Capricia Sementa and a group of her friends. Shoving herself right up against him, Capricia began running a curious hand up and down his muscular arm as if she owned him.

"Tell me you'll come over to my house after school today," she cajoled in her most sexy voice. "I've missed you lately. Where have you been?"

As Capricia tried coercing him, Jimmy lifted helpless eyes to peer over at Jaada who was eyeing the scene with disappointment and concern. Angry, she finally walked off to class, leaving him to untangle himself from the many female hands boldly running over his powerful physique. Not long afterward, he walked into one of the classes they shared. But this time, because of the assigned seating, he was forced to sit two seats in front of her and to the right.

He glanced sadly at her when he came in, but she immediately turned away, avoiding his eyes. Sighing, he sat down and spent the morning feeling like an idiot because he had let the other girls overwhelm him like that. He had every capability of removing himself immediately from the situation, but he hadn't done so. Chiding himself because he had secretly been enjoying all the female attention (Heck, what guy wouldn't?), he now realized the mistake he had made, but vowed it would not happen again. As it was, he had rejected Capricia's invitation for the second time. Even now, his interests and thoughts were only on one person. Jaada.

He caught up with her later. He found her alone in the library, working on a paper. It was fortunate that there was a vacant console beside where she was sitting. As he deposited his pile of disks beside the v'd'mr, along with some digitexts, he looked down at her until she felt the need to glance up at him. Her eyes widened as a disgruntled frown formed across her rosy lips. However, before she could say anything, Jimmy reached out a hand to stop her.

"I'm sorry, Jaada," he said. "I hadn't intended for that to happen. In fact, nothing like that has ever happened to me before. You have to believe me. I just didn't know what to do."

She gave him a once over, miffed look. "I don't own you," she said. "Whatever you do is your own concern."

He scowled then, not caring for her manner towards him. She saw what had happened. What had she expected him to do? Shove everyone away from him with brute force? He sat down, suddenly angry.

"But you do own me," he whispered emphatically. "Since the first time I saw you!"

Her mouth dropped then, her eyes wide as she stared at him. He was peering at her with those gorgeous, mesmerizing blue eyes, and she melted beneath them.

"And why are you so mad at me?" he asked. "Tell me." He studied her frightened expression then, unlocking the truth in her eyes. "If you don't want me, then why are you so jealous of those other girls?

Jaada gasped then for it was as if he had peered right into her soul. She made a quick attempt to rise, but he grabbed her arm before she could flee. Glancing about quickly, he made sure no one was watching before he dragged her through the huge racks of digitexts and v'd'mr disks lining the enormous room. She protested only slightly before curiosity won out. Once on the second tier of the building, he found a small vacant room, pulled her inside and closed the door. They were alone with one another, with a member of the opposite sex, for the very first time. Not counting family members, of course.

"What...are you doing this for?" Jaada said nervously when he finally released his hold on her arm. Rubbing it, she began backing away from him. But he would have none of it.

"I told you, Jaada," he said, moving toward her with purposeful intent. "You own me. I am yours. If you want me. So you can do with me whatever you want to."

Free Romance: Searching for the Truth - A Screenplay in Three Acts

by Pratibha A. Dabholkar, Ph.D. This love story is aimed at helping readers broaden their thinking about guardian angels and eternal love connections. I......