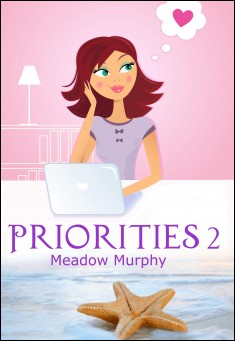 The sequel to Priorities: Rita's story, Rita's priorities are different than Carries when it comes to love! See where her adventure takes her in Priorities 2!

I had these huge plans for high school, it was going to be an epic year. It started out with Carrie and I spotting a new guy (Brandon) and her ex-boyfriend (Alex) in the hallway. Our sights were set, at least mine were. I wanted Brandon who I compared to Marzipan dipped in chocolate (delectable). Sky was the limit if I could land him, with his superior hockey skills, he had real cash cow potential.

Carrie, (my best friend) and I decided to join the school newspaper writing and photographing sports events, which would bring us to the games. It was a great excuse to be there without looking desperate.

The guy I liked started hanging around my best friend’s boyfriend Alex who Carrie caught cheating on her last year with our mutual friend Melissa. Carrie popped her in the nose at a pool party and needless to say, Alex and Melissa got back together, and now, we’re not really friends with Melissa anymore.

I hook up with Brandon thinking it’s the start of a great relationship and give him the big V thinking it will definitely land him, and the next day, did I say NEXT DAY he breaks up with me. What an absolute waste of two minutes to be exact. I saved something precious for two minutes of less than stellar performance on his part and then he has the nerve to end it the following day.

Carrie hooks up with my table scraps who literally gets offered a contract for 35M to skate for Edmonton but she doesn’t want to sacrifice her dreams of working in the lowest paying sector of the healthcare industry as a physiotherapist. (Who does that?)

Her story doesn’t end there, she stumbles into a writing career and hooks up with an editor who can be found in the dictionary under the word sexy, she finds out he’s loaded beyond belief and he’s only just the brother of the hugest rock star of our time, ‘Slasher!’

Carrie and my table scraps set a date three years from today to see if they should get back together or if they’ve moved on. I can’t see her ever leaving her sexy editor to meet with Marzipan for a lifetime of two minutes or less, and I’m not talking about his hockey career.

Going off topic here, after Two-Minutes I hook up with John who also plays hockey. He didn’t get offered the same contract as Marzipan, but he’s been offered a spot in a Canadian league that is one step below major league hockey with the difference that they play for the love of the sport. (Zero money, what a joke!)

After I gave my V to Brandon, I behaved more freely with it after, so it didn’t take long for John and I to..you know. The problem is, I find out that John is more potent and I’m pregnant. Most girls would be upset, but I’m not. I’ve cemented my cash cow, the only problem is he’s not earning any cash at the moment. In his defence though, at least he’s a ten minute guy instead of a two minute guy so he’s one up on Brandon for that, he just has to make it into the major league hockey like Brandon did.

My pregnancy doesn’t go over well with John and he decides to move to Niagara where he’s been asked to play hockey and as much as I want to go with him, he says the baby and I will be a distraction, so Carrie offers me her apartment in Toronto.

I leave Edmonton to set up in Toronto when the unthinkable happens, I lose the baby. Medical staff don’t know why, they just tell me it’s gone. I’m devastated and John flies into Toronto to be with me, but he’s distant. I’m thinking he see’s this catastrophic event as an out. I don’t know if I’m crying more over the loss of the baby or the loss of him but I’m depressed, and that’s where we left off.