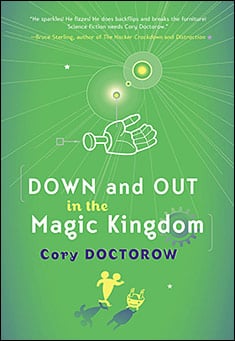 Down and Out in the Magic Kingdom
By Cory Doctorow

Jules is a young man barely a century old. He's lived long enough to see the cure for death and the end of scarcity, to learn ten languages and compose three symphonies...and to realize his boyhood dream of taking up residence in Disney World.

Disney World! The greatest artistic achievement of the long-ago twentieth century. Now in the keeping of a network of "ad-hocs" who keep the classic attractions running as they always have, enhanced with only the smallest high-tech touches.

Now, though, the "ad hocs" are under attack. A new group has taken over the Hall of the Presidents, and is replacing its venerable audioanimatronics with new, immersive direct-to-brain interfaces that give guests the illusion of being Washington, Lincoln, and all the others. For Jules, this is an attack on the artistic purity of Disney World itself ...

I lived long enough to see the cure for death; to see the rise of the Bitchun Society, to learn ten languages; to compose three symphonies; to realize my boyhood dream of taking up residence in Disney World; to see the death of the workplace and of work.

I never thought I’d live to see the day when Keep A-Movin’ Dan would decide to deadhead until the heat death of the Universe.

Dan was in his second or third blush of youth when I first met him, sometime late-XXI. He was a rangy cowpoke, apparent 25 or so, all rawhide squint-lines and sunburned neck, boots worn thin and infinitely comfortable. I was in the middle of my Chem thesis, my fourth Doctorate, and he was taking a break from Saving the World, chilling on campus in Toronto and core-dumping for some poor Anthro major. We hooked up at the Grad Students’ Union—the GSU, or Gazoo for those who knew—on a busy Friday night, spring-ish. I was fighting a coral-slow battle for a stool at the scratched bar, inching my way closer every time the press of bodies shifted, and he had one of the few seats, surrounded by a litter of cigarette junk and empties, clearly encamped.

Some duration into my foray, he cocked his head at me and raised a sun-bleached eyebrow. “You get any closer, son, and we’re going to have to get a pre-nup.”

I was apparent forty or so, and I thought about bridling at being called son, but I looked into his eyes and decided that he had enough realtime that he could call me son anytime he wanted. I backed off a little and apologized.

He struck a cig and blew a pungent, strong plume over the bartender’s head. “Don’t worry about it. I’m probably a little over accustomed to personal space.”

I couldn’t remember the last time I’d heard anyone on-world talk about personal space. With the mortality rate at zero and the birth-rate at non-zero, the world was inexorably accreting a dense carpet of people, even with the migratory and deadhead drains on the population. “You’ve been jaunting?” I asked—his eyes were too sharp for him to have missed an instant’s experience to deadheading.

He chuckled. “No sir, not me. I’m into the kind of macho shitheadery that you only come across on-world. Jaunting’s for play; I need work. ” The bar-glass tinkled a counterpoint.

I took a moment to conjure a HUD with his Whuffie score on it. I had to resize the window—he had too many zeroes to fit on my standard display. I tried to act cool, but he caught the upwards flick of my eyes and then their involuntary widening. He tried a little aw-shucksery, gave it up and let a prideful grin show.
“I try not to pay it much mind. Some people, they get overly grateful. ” He must’ve seen my eyes flick up again, to pull his Whuffie history. “Wait, don’t go doing that—I’ll tell you about it, you really got to know.

“Damn, you know, it’s so easy to get used to life without hyperlinks. You’d think you’d really miss ’em, but you don’t.”