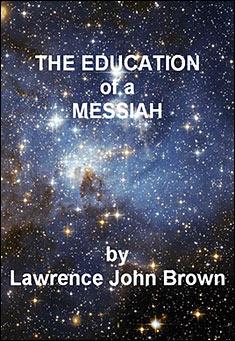 The Education of a Messiah
By Lawrence John Brown

When androids come to earth and make impossible demands, Paul Heart, messiah #18,432, becomes restless. On an impulse, he travels to China and meets Ato, a Taoist master, who teaches him wisdom he has learned over several lifetimes. Ato has been sent by higher powers to prepare Paul to lead the world to a new age. Despite the tense situation on earth, Ato has a lot of fun carrying out his mission.

It began as a routine training assignment, which we usually complete in the dream state, but when the Valkarians reached Earth sooner than we expected, I had to get my boots, I mean my sandals, back on the ground.

Their black, oval-shaped spaceship materialized above the valley of Megiddo in Israel at sunrise on Sunday, March 15. The Valkarians arrived on that day because John, their advisor on Earth culture, had told them it was the day humans would celebrate the luck of the Irish with St. Patrick’s Day parades. But St. Patrick was the guy who chased the snakes out of Ireland.

Within a few hours, thousands of people had come to Megiddo to see the spaceship, which hung over the valley like a dark cloud. In the afternoon, the Valkarians, using their superior technology, interrupted all TV and Internet transmissions with this caption in white letters on a blue background: “Standby for an important announcement.”

A moment later, a middle-aged man in slacks and a sweater, who could have passed for an American or a European, appeared on the world’s TV and computer screens. He was sitting on a sofa that was next to a fireplace with a crackling fire. Turning toward the camera, he said, “Greetings, people of earth! I am Almar from your neighbor in space, the planet Honam. We have come to tell you that you are on a path that will lead to the end of life as you know it. But like your great President FDR said, the only thing you need to fear is fear itself. In one week, we will present a plan before your United Nations to help you save the earth.”

Over the next six days, the Valkarian spaceship made picturesque stops above the Taj Mahal in Agra, India; Tiananmen Square in Beijing; St. Basil’s Cathedral in Moscow; the Eiffel Tower in Paris and the Great Sphinx of Giza in Egypt (on the same day); Copacabana Beach in Rio de Janeiro; and the Pyramid of the Sun in Teotihuacan in Mexico.

Their world tour ended in New York City on the morning of March 22, when they parked their spaceship above the UN Secretariat building. By noon, the ship was casting a shadow over all the UN buildings while thousands of people waited below for something to happen. I was surprised the people weren’t being more careful, but maybe they hadn’t seen the movie Independence Day.

Early the next morning, two men, a fortyish, tall black man—the previously mentioned John—and Almar, stepped out of an elevator in the forward area of the ship’s hold and began walking toward two desks about thirty meters away.

Sitting at the desks were androids. The androids were two and a half meters tall and had many of the features of men. But they were incapable of smiling, laughing, crying, etc. The permanent expression on their faces could best be described as contempt or disdain.

When John and Almar were a few meters from the desks, the android on the left looked up and said, “As you know, Terrak wants to try diplomacy first. But remember, don’t tell them who we are.”

“You have one earth month to get the humans to accept our terms,” the android on the right said. “If you fail, we’ll use methods that worked on your planet. Dismissed.”

by John Francis Kinsella Arkady Demitriev had been a young boy when the Soviet Union had been dissolved by Mikhail Gorbachev and had just enrolle......