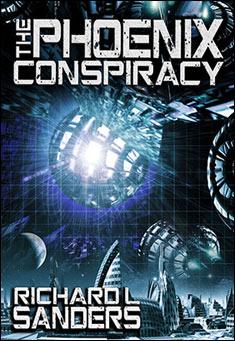 On the surface, the galaxy seems peaceful. Humankind prospers from the Capital World to the far reaches of The Corridor. But to those who can see the signs, it's clear something is wrong. Long, dark fingers are pulling strings inside the military, making clandestine deals with enemy states, and fulfilling some dark design.

Calvin is an intelligence agent working for the Imperial government. He's young, his methods are unorthodox, but he gets results. So when a former military hero steals a warship and goes rogue--threatening to start a war, Calvin is sent to eliminate him.

But as he chases his prey across the stars, he realizes they are both pawns in a shadowy chess game that shakes kingdoms, divides empires, and threatens civilization everywhere. And if he is to uncover the mystery and expose the conspiracy he must confront--and embrace--the darkest elements of the galaxy and throw himself, his career, and everyone he loves into the line of fire.

All eyes not glued to computer screens were staring out the windows at the two monstrous cruisers flying alongside them. Warships more interested in preventing their escape than offering protection.

Raidan felt the weight of every passing second, each moment taking him one step closer to the inevitable. And, in the silence of spaceflight, he heard the solemn bells of the executioner.

“This is it, boy,” he whispered to himself. “I hope it was worth it.” His XO looked up from her station, probably in response to his mumbling. Her narrow eyes shot him a hateful glare.

Seeing her that way, knowing her disgust was justified, made him almost regret his decision to leave her in the dark. She’d been a faithful friend these past several years, and deceiving her had left a bitter taste in his mouth. But if he hadn’t betrayed her, if he’d instead chosen to tell her everything, she would have worked against him to compromise his efforts. Or, perhaps worse, she might’ve taken his side. He doubted it—breaking the law and defying orders wasn’t her way—but if she had, she’d be bound for prison now too. And that would be unbearable.

Poor beautiful Commander Presley. And she really was beautiful with glossy golden hair, a splendid physique, and, most important of all, cunning green eyes that pierced anything, feared nothing, and gleamed with intelligence. She was more than most twenty-eight-year-old officers could hope to be and an outstanding second in command. His eyes traced her misleadingly delicate face, and part of him wished he were ten years younger, like the junior helmsman at her side, enthralled and intimidated by such a stunning young woman. With an amused grin, Raidan imagined himself as the boy he used to be—the timid new officer at the ops post, nervously scouring his mind for an excuse to ask out a girl. It made him smile, and, for a moment, he almost forgot the gravity of his situation. Almost.

“We’re being instructed by the flagship to resume speed,” said the helmsman.

Raidan raised a curious eyebrow. They were afraid he’d somehow slip away and escape, despite the massive force they’d sent to arrest him. The powers that be must realize how much I still threaten them.…

“Comply with all instructions,” he said, knowing he had no other choice.

The helmsman and the rest of the bridge staff looked elegant in their blue-and-black uniforms while they worked tirelessly to keep the damaged ship under control. They had a certain dignity, and it had been a true honor serving with them over the years. An honor tainted by the fact that he was being forcibly removed, leaving them shocked and confused and wondering … why had fellow Imperial starships intercepted and boarded them? Why were they being escorted to the nearest government station, Praxis One? And why was their faithful CO under arrest? Had their last mission been the captain’s personal crusade and not orders from the fleet?

by John Francis Kinsella Arkady Demitriev had been a young boy when the Soviet Union had been dissolved by Mikhail Gorbachev and had just enrolle......