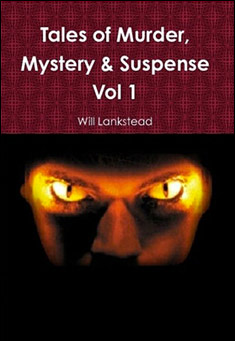 Tales of Murder, Mystery & Suspense Vol 1
By Will Lankstead

A Collection of eight short stories about Murder, Mystery and Suspense. Such titles include: Small Talk, Little Jimmy Slater, Nice Work if you can get it!, Sara, the Underpass.

‘Not a bad day for it, is it? At least the rain’s held off and the sun is trying its best to come out. But, to be honest, the weather doesn’t really bother me that much. Come rain or shine there’s a job to be done and someone has to do it, don’t they? That’s what I think anyway. The weather can bother some people though; especially the ladies if it’s windy if you get my meaning. Undignified, some complain. I’m surprised that it matters at this stage, but I suppose it takes all sorts! Yes, you’re right! The gentlemen don’t have that problem. Lucky for them I suppose. Anyway, whatever the weather it’s always guaranteed to bring in a large crowd. Personally, I don’t class it as at all. Not in the slightest. But then, funnily enough I am quite sensitive. I’d much rather go to a Public House with some friends for a few pints of beer! Aye, it’s a big crowd today alright. Well, it’s a Bank Holiday or somebody’s Feast day isn’t it? I always get mixed up! Apart from Christmas and Easter of course. I couldn’t forget them! For some this whole thing is a kind of morbid curiosity. I don’t think they have a particular opinion either way. Doesn’t matter who’s next. They don’t care. What do I get from it? That’s a difficult one. I can’t really say I enjoy it. It’s just a job. Not a bad wage and the hours are good. It keeps the wolf from the door, or more importantly it keeps the wife and kids happy. Well, I have got four of them; kids I mean, not wives. God bless her, one’s enough! There you are, that brought a smile to your face didn’t it? Things don’t seem so bad now, do they? You just keep that up! You’ve a lovely smile. Your whole face lights up, when you smile and you’ve such a pretty face! I must say that one of the perks of this job is meeting people. There’s always the chance of overtime, as well if there’s a busy schedule. He keeps me very busy you know. He does have a reputation to live up to. Hey you lot! Stop pushing! There’s plenty of room, I won’t tell you again! Some people are getting crushed here at the front. I won’t tell you again! Sorry about that. Some of these young buckos have no manners whatsoever! I blame the parents myself. No discipline and left to run riot. They’ve no respect for anyone either! You just move a bit closer to me love. I’ll keep them back. Where was I? Oh yeah, I suppose in these hard times of recession you have to take whatever work you can get. There’s no such thing as a secure job, is there? Take me for instance. I could be out on my ear tomorrow or in your place! What did I do before this job? Well I never for one moment thought I’d be doing this for a living; not in a million years! You can try and guess if you like. A blacksmith? No, try again. Although my Father was, Lord rest him. A herdsman? No, wrong again. One more? A Publican ?! Good God no! Although I suppose I should be, the amount of time I spend in the Pub! Do you give up? Just one more, okay? A boatsman ?! No, no no! I was a time-served Carpenter. But then I had to try my hand as a Butcher, well, a Slaughterman to be more precise. I never really liked it. All that mess, and the poor animals seemed to know where they were going. The cries were unmerciful. Poor dumb bastards! Oh, I am sorry. Forgive me. I didn’t intend to upset you. I sometimes speak before I think. Me and my big mouth! I suppose people will always eat meat, won’t they? It did have a recent set back. It was suspected of being the source of all that sickness we had. I lost an Aunt and a brother to the sickness. He was only a kid. Yes, you’re right! I suppose this job is a continuation of my former profession. Do you know, I never really made that connection before, but now that you mention it! I can see that now. Shall I tell you a joke? It’ll cheer you up. You’ll like this one! Tales of Murder, Mystery and Suspense Vol 1 It still makes me laugh every time I tell it! Well, there were these three farmers arguing over who had ownership of a cow. One Farmer says: ‘I know this is my cow because I can tell by the……’ Oh here we go! Duty calls again! I’ll be back as soon as I can. You just stay there. I’ll make sure nobody jumps ahead of you in the queue. It wouldn’t be right, would it? Bad manners and all that. We certainly don’t encourage that sort of behaviour here. Politeness costs nothing does it? If there is one thing we can be proud of in this country it’s good manners, isn’t it? It’s the mark of a civilised country. Not like some of the bloody foreigners we get through here. Bloody know-alls! They’ll even try to tell you your job! What a damn cheek! Of course, I can’t understand a bloody word they say, clacking on in their own tongue. It sounds like gibberish to me! What’s wrong with using the King’s English I say? Anyway, I’ll be back as soon as I can. It won’t be long now. Just this bloke and then it’s your turn. Take a seat while you’re waiting.

Bone Structure and Other Stories

by Moti Ben-Ari Do you like getting a haircut? How far would you go to be with your cat?  Do you dare eat black-forest cake? What r......