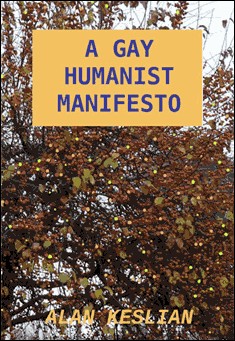 This non-fiction booklet gives a gay perspective on humanist beliefs. It discusses subjects such as monogamy and promiscuity, and counters the rejection of same sex attraction on moral and religious grounds. Touching on scientific and social arguments, it takes only an hour or two to argue for a positive outlook on the place of lesbians and gay men in the modern world.

Human characteristics vary from one individual to another. This variation is natural and desirable. It helps us to adapt and survive in a changing world.

Darwinian evolution is the scientific theory which explains how different species of living things all developed from earlier forms through genetic variation and natural selection. Variations that help any form of life to thrive are part of the process that brings about new species. Because of the vast timescale and the many thousands of different species on the planet, the way evolution works as a whole cannot be tested and demonstrated in a laboratory. Nevertheless a huge body of evidence does exist; it comes from recorded observations of nature, from the selective breeding by humans of plants and animals, and through links to biology, the fossil record, geology, astronomy, cosmology, physics, chemistry and many other scientific disciplines.

Simple observations and experiments can be carried out by breeding species of plants or small animals to demonstrate that variations occur and are passed on from generation to generation. Some rules to predict how certain traits are inherited were identified by Gregor Mendel in the 1850s. He studied the characteristics of pea plants, and one of the milestones in his research was the discovery of pairs of dominant and recessive genes. Cross-pollination of plants that produced yellow seeds with plants that produced green seeds would result in some later generations having 100% of plants with yellow seeds, and some with 75% yellow and 25% green. No later cross-bred generations contained fewer yellow than green, and Mendel found it was possible to predict the percentages that would occur. He deduced that the traits of seeds being yellow or of being green occurred as a pair, and that the yellow trait was dominant. A plant inheriting one gene of each type, i.e. having the yellow from one parent and the green from the other, would bear only yellow seeds; only when both parents had the green trait would plants bearing green seeds result.

molecular sequences in the genes of the living cells that make up our bodies. Our species, homosapiens, shares most of these sequences with other animal species. We have developed in the same way as other living things, through the processes of individual variation and natural selection. Some human traits, such as eye colour, follow the dominant/recessive gene pattern of inheritance. Recent estimates of the numbers of lesbians and gay men in human populations, 5% or so, are much lower than the 25% found when a variation is due to a single dominant and recessive gene pair. Though estimating characteristics in human populations is more complex than counting the seeds of cross-bred pea plants, this suggests that sexual orientation is not determined by anything as simple as a single pair of dominant/recessive genes.

When species spread into new areas, or when the environment changes, some traits become more, or less, useful than they were before. New traits may appear at any time through genetic mutation. The outcome is a slow and continuing process of adaptation, and this has resulted in the huge range of species that has come into existence over the millions of years life has existed on earth. Many species have become extinct, some through dramatic environmental change, others because new species appeared that were better able to survive and breed.

Our brains being so much larger than that of other species, we are uniquely able to alter our environment intentionally. From forest clearances to fresh water reservoirs, we are increasingly working the levers of environmental change.

by Iris H A collection of remarkable ideas that encourages in depth imagination and exploration about life, society and philosophy......

by Roy T James We are not at all aware of the true status of human life, and are trying to bring peace and harmony, which however remai......