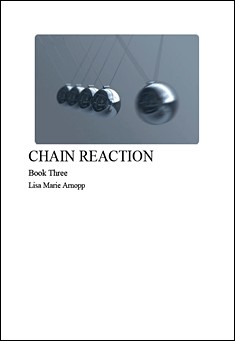 Book three in the Santa Katrina Trilogy. Download books one and two.

Eric was a ticking time bomb and he knew it. The last two years had brought about enemies that were proving to be formidable and persistent. When he blew up and hit Greg, he knew he went too far and try as he might, he couldn't contain his temper completely. How could he when people were dead set to hurt his inner circle and more often than not they targeted his talented little sister Kate? When a new foe reared its pretty head he used his metaphysical skills to test his rival. Unfortunately metaphysics had nothing on chemistry.

Eric Thomas sat on his knees as he colored his picture.  He was very good at it, if he had to say so himself and he often did.  Better than his twin Matt.  Both were better than the other kids in preschool.
“What are you drawing?”  His mother asked looking over his shoulder.

“Our new family.”  He stated proudly.  Taking the pink crayon he added a bow to the baby’s head. In the drawing were his parents, Matt, Eric, Brian who was standing because he would be old enough to when the baby arrived and a baby stroller with the prettiest little girl smiling happily inside.

Matt peeped up to see what the hubbub was about.  “We’re having another boy, dummy.  Dad said.”  He pushed Eric’s shoulder and almost caused him to draw where he didn’t want to.  It incited a tussle and their three-month pregnant mother pulled them apart, as usual.

“Boys!”  Their imposing father hollered.  “Your mother has a baby and another on the way.  Stop acting like animals.”  Luckily he was feeding Brian in his arms keeping his temper in check.

“Katherine Ann is a girl.”  Eric huffed out as he pulled away from Matt.  He wrote his name expertly on his masterpiece.  Matt and Eric were the first in their class to write their names.  Matt was technically first but Eric right behind him.  It was easier for Matt since two of the letters were the same.

“What a stupid name?”  Matt taunted.  “Even if we have a sister, you aren’t going to call her that.”

Matt had named Brian.  Their parents said Eric could name their next child pending their approval.

Eric only glared at Matt.  “You may call her Kate and she’s my sister.”

Their mother laughed.  “And if it turns out to be a boy?”

“She isn’t a boy.”  He rolled his eyes.  Grandma Ann had told them the truth.  Then he stuck his tongue at Matt who knew their mother was going to have a daughter and was just being difficult because he was cranky.
That time Matt started the bout and Ron handed Brian over to their mother.  After ending their scuffle he marched them to their room where they were ordered to stay until dinner.

“She’s a girl.  Grandma’s never wrong.”  He rolled over to face Eric.  “And I like the name Kate.” Sometimes he wondered what it would be like without a twin and then sometimes it wasn’t so bad.

by Will Shetterly Your dad used to be the spooky-mysteries TV show host Professor Midnight. Your grandmother lives in the basement and onl......

by Gabrielle Meier This is the passionate life story of two young rodeo kids Autumn and Albert. Together they learn about life's challe......