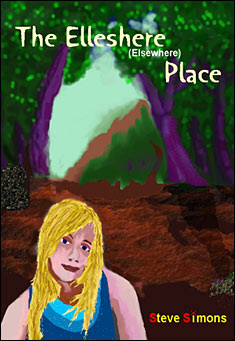 The disappearance of a father and then his daughter, are of interest not only to the police, but to someone else nearby. But little does the man know, how much he, a complete stranger to the area, will be dragged into the events that have unfolded. That is until he finds himself recording the whole thing.... and what a strange story it is indeed.

A figure dressed entirely in black was standing at the top of the rocky outcrop, surveying the surrounding countryside, as if in search of something.  The mist made it very difficult to make out any features of the figure's face, so must have made it almost impossible for the figure to see whatever it was seeking out. The figure turned and walked off of the outcrop, disappearing from view.

Out of curiosity I had walked in the same direction, only in my case being below the outcrop I had to walk around it.  I had wondered if I would see the person again.  I was curious as to who it was and what they were doing out here, I thought no-one lived here, yes there were settlements in the area at one time, but I didn't know anyone was still living here. Perhaps like me, the lone figure was a visitor to the area.  Some visitor I am though, it almost felt like I lived here, I had been in Cornwall for four months and still had a couple to go.  Don't get me wrong, I loved the place, its just that I didn't really belong there, as if I had outstayed my welcome.

Anyway this story isn't about me, its about her, the figure on the rock.  I walked round the rocks, noticing that the ground was sloping upwards, heading towards the top of the rocks.  I tried to pick up pace, but it was difficult, as the path, if you could call it that, got steeper.  I wondered if I would lose the figure that I had seen, on the outcrop.  The thought had spurred me on.  I had just caught sight of her, the figure, disappearing into the house in the distance, as I reached the top level.

That was my first encounter with her.  I thought nothing of it until I was at a loose end again one day and I headed back out to the same rocky outcrop.  It was bare, it would be too much to hope that she would be there again.  I had retraced my steps and ended up seeing the house again. As I got nearer, I heard crying.  As I concentrated more on the front of the house, I saw her  sitting on the front step, dressed in a white tee shirt and blue jeans.  She was only a child, difficult to judge her age, sat down like that.  She had long blonde hair, that covered her face.  Apart from the fact that there was no-one else around, I could not be a hundred percent sure that it was her crying, yet it had to be.  I was unsure if I should mind my own business and clear off before she or anyone else saw me, or if I should offer my help.  As no-one else seemed to be coming to her aid and she was sobbing quite loudly, I decided to put my doubts to one side.  If there's one thing I can't abide, it is to see or hear another human being suffering.  I can't stick the tantrums of kids at the supermarket.  I feel sorry for the parents AND for the kids.

I walked towards her, stopping at a reasonable distance, so that she didn't feel threatened, if she wanted to tell me to back off she would still have the time and the space to do a runner if she felt she needed to.  I then gently asked what was wrong.  She was startled, she looked up at me and her face told me instantly that she was afraid.  I re-assured her that I wasn't going to harm her and I just wanted to know if there was anything I could do to help her.  That was the first time I heard her, she said, "Its my dad, he's vanished."

"What do you mean vanished?" I asked her.

She looked at me like it was really none of my business, which of course it wasn't really, but after looking me up and down a bit, she replied, "He left eight days ago, to get some food and other supplies and I haven't seen him since."

"Did you ring the police?"

"Yes, but they can't find any trace of him, his car is still just down the hill. Its like he never left the place.  I fear the worst." She looked like she was going to start crying again.

I couldn't ask the obvious question as I knew she'd start crying again, but I knew I had to move her on and try to solve the problem, but how? I racked my brains, then asked, "Is it possible that he's hiding out somewhere nearby?"

"Why?"  She looked at me as if I had just said the stupidest thing in the world.

The Stones of Home

by Rowan Oliver Ward Utting After a century and a half of isolation, the surviving Mages of Haven reunite to combat a rising power. Their journey an......

The odd one becomes a Someone

by Chiamaka Udeoji A story about the the Leverets family, who are known for being hard working except for one of them. Her name is Eliza Le......