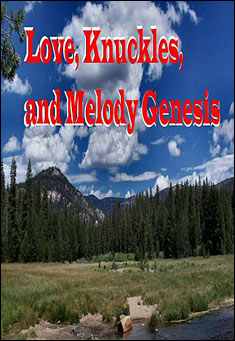 High school is a difficult time in a young boy's life. Especially for Cord, whose infatuation is campus cutie, Melody. Even worse when the campus bully has claimed her as his own. Now Cord has his hands full chasing Melody and dodging annihilation.

I'ma just gettin' to wakin' up rubbin' the sleepy goobers from my eyes and such and I knows I just gotta tell you thisere story so's I better git to it. Here's how thangs is, my name is Cord. Not by birth but by choice. The way I sees it this is my life so's I'll live it my way with a name of my choosin'. Of course there ain't nobody whut sees me eye to eye on this view. Well, I got me some choice answers for them types. I'm what you might call a "misunderstood severely abused type."

By now you may be wondering what a happening hillbilly feller like me does when he's not doing other thangs that some people say are important. Well, I'll make it easy on you. I'll tell you that what this happening feller does is hang with the only other happening feller he knows. A happening feller that most folks would agree and say, "Yeah, he's a happenin feller."

He's a big time football star at Chillamore Central High School. Gets all the girls, invitations, special thangs that stars get. I don't know why we ended up being friends. Hell, most folks like him look at me sideways and put two fingers in their mouth like they's hurlin'. Not him though, good ole' Haggis. Yeah, you guessed it right. Only I can CALL him Haggis. Anybody else whut tries it will get a fistful of knuckles.
So, like I was sayin', most days we go to his basement and shoot the beeswax 'bout all thangs. It helps that we growed up next door to each other. We've been best friends since we were knee high to a grasshopper two year old skedaddlers.

Today we're in our own special corner of the basement-a corner that keeps getting' bigger by and by-building our soon to take over the architectural world soda can city which we've named Tin Towers. I just popped out with that name and Haggis said, "Yeah baby! Cool name."

We've been collecting soda cans from our soda drinking and sometimes we collect cans from differnt places.
Like behind old Lomack's Deli on Garnett Street. They always have their dumpsters overflowing with cans so sometimes we dive in and grab us a whole bunch. The last time we did that we got so many cans-after three trips one after the other-that we were able to add in one day a monster sized football stadium with a matching ice cream parlor for big ice cream junkies. Now we're working on hugimundo skyscrapers.

I was thankin that maybe we should name one of the skyscrapers Tin Towers instead of the city. But the more I thought about it, the less important it sounded. I mean, why can't a city be called Tin Towers? Nothin wrong with that.

'N if'n you thanks they is…well…I s'pose y'know my answer to that by now.

But I'm thankin' we's past the point of being interested in some stupid tin can city when there's bigger fish to fry in this town. Let me tell you somethin' to catch ya up 'n stuff. This girl. Melody. Sweetest little twilley y'ever did see. Now I ain't one to go hog wild callin' 'n such but I s'pose ever feller's got his weakness and all. And I'm here to tell you she be mine. Weakness that is. Other'nat she don't even know I exist. Kinder. I reckon she knows me like everybody else at Chillamore Central. Stinky Rimky: The kid who's never parted from stink enough to get lonely. The kid who smelly and him go together like a nose and boogers.
Somethin' like that.

Yeah, as a kid, a little ankle biter nose pickin' ass wipe, I was known for a certain strong smell that seemed to linger no matter what. But that was a long long time ago. I's much differnt now. Heck, I even change my underbritches once a week now. Useta could not change it for dang near one month. So opinions is laggin' the turn of thangs. And that's a cryin' shame really. To thank that all this prejudicial dumb ass thankin's standin' between me and that girl whut may be my one and only. One day. Maybe one day far aways. But I cain't get m'self all down and slumpy over that kinder thankin'. Ain't doin' no one no good nohow.
No kawhillickers.

So's I just go on like'n I don't thank about her anyways 'cause there's no other way to be. For me that is. Good ol,' greasy ol',smelly ol' Cord Rimshank. D'you believe them sombitches calls me Rimjob? Believe you me when I catch 'em tellin' that trash tawk I get a quick high tail it word round to ol' Haggis. He shows 'em what's what.

But it ain't like he's my bodyguard or nothin'. He just don't like people tawkin' bull puckey 'bout me no more'n I like it! Still it don't help me none with light of my heart, Melody. Most days I feel lower than a whale's belly and let me tell you that's mighty low.

by Will Shetterly Your dad used to be the spooky-mysteries TV show host Professor Midnight. Your grandmother lives in the basement and onl......

by Gabrielle Meier This is the passionate life story of two young rodeo kids Autumn and Albert. Together they learn about life's challe......