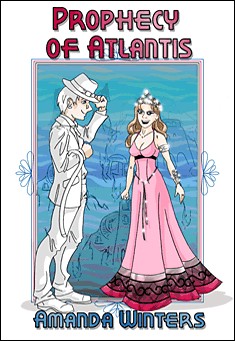 Prophecy of Atlantis
By Amanda Winters

Amanda, Ann's daughter, assumes the royal throne on Raz, but she has a real problem: she can't decide who's going to be her king. While debating which of her many suitors will be a good fit, she is called to go to Atlantis on Earth, where she is to destroy the city. But the man she meets up with is just as determined to go back in time and prevent Atlantis from sinking into the ocean in the first place.

It was time to announce the new Queen of Raz and many of the creatures living on Raz eagerly attended the ceremony. Queen Ann and king Hathor had two daughters, so the next Queen would be either Katherine or Amanda. Matthew, their brother, would be the one to escort the new Queen to her throne where Queen Ann would make the announcement. He waited between his two sisters at the entrance of the Throne Room.

Queen Ann was ready to retire her role. She stood between the Queen and king"s throne. She glanced around the room. Her eyes fell to Hathor who gave her a knowing smile. She returned his smile with great affection. She looked forward to spending her remaining years on Raz with him. It had seemed that during her reign, she never had as much time with him as she wanted.

Her eyes fell to her two daughters. Katherine was the oldest, but she knew, even before Amanda was born, that Raz had selected Amanda to be its next Queen.

She considered the difficulty this would likely cause between the two sisters who were already competitive with each other, especially since Katherine often felt inferior to her more Prophecy of attractive and outgoing younger sister. She just hoped that the two could find a common ground and resolve their differences soon. She knew she could not interfere in the battle between the two since they had to be free to make their own choices. They were grown women now. Katherine was twenty-seven and Amanda was twenty-three. Ann"s role as a mother was to be supportive of them.

Hathor requested silence among the crowd and went to stand next to her.

She took a deep breath. "I wish to welcome Queen Amanda to the throne."

Ann noted the disappointment in Katherine"s eyes and momentarily winced because of it, but she could not allow her focus off of the ceremony. This was Amanda"s shining moment, and as happy as she was for Amanda, she also ached for Katherine. She loved them both so much.

Matthew took Amanda"s arm and led her to Ann.

Amanda knelt before her while Matthew put his hand on Amanda"s right shoulder.

"Queen Amanda, it gives me great joy to pass the title of Queen to you," Ann said as she took off her crown and placed it on her daughter"s head. "May you faithfully serve Raz and everyone who lives here."

Amanda stood up, walked over to the throne and sat down. Everyone cheered. Their future was secure with another Queen.

Ann glanced at Katherine who slipped out of the room. She quietly excused herself and followed her eldest child. "Katherine," she called out after the slender figure who was quickly retreating down the hall.

Katherine immediately turned around and stopped. Her curly shoulder-length brown hair fell gently to her shoulders. Her light blue eyes displayed her sorrow.

Ann sighed as she put her arm around her daughter"s shoulders. "I know that this news has upset you. The planet chooses the one it wants and there"s nothing anyone can do about it."

"I know," she replied, her voice soft. "Raz made the right choice. I"m not Queen material. I"m not as attractive or as brave as Amanda."

"Well, courage isn"t necessarily a requirement for being a Queen. I was a coward when I began my reign."

"I find that hard to believe."

The two walked outside into the gardens and sat down by the daisies.

"I love daisies so much," Katherine said. "If I were a Queen, I would decorate the entire Throne Room with them."

"You have every right to be disappointed. Being the Queen is a cherished role that any young woman would love to have. Perhaps you have another destiny to fulfill that Amanda wouldn"t be able to."

She rolled her eyes. "I"m sorry, Mom, but I find it hard to believe that I"m going to accomplish something monumental."

"Queens can"t do everything." Ann picked up a daisy and handed it to her. "It doesn"t look like much, but this flower brings a sweet fragrance wherever it goes. The daffodils smell good too, but the daisy has its own special scent. Some people would say the daffodil is prettier. You prefer daisies. The daffodil and daisy are equally important. They just have their own appearance and smell. Likewise, you are just as important as Amanda. You just need to find what it is you do well and do it. I guarantee you that what Amanda cannot do, you can. Just because you"re not the Queen, it doesn"t mean your life isn"t just as significant."

"What are mothers for?" She stood up. "I better get back to the celebration. Would you like to stay out here for a while?"

Disfigured Angel 2 - Guardian of the Veil

by W. Wright Adam Lucius Evans was born with a severe case of Hurler’s Syndrome, also known as gargoylism. It was the result of......

by Austin Ray Bouse Identical twins Jane and Catherine Gracey are known as the weird kids. Mocked and misunderstood for their love of the st......