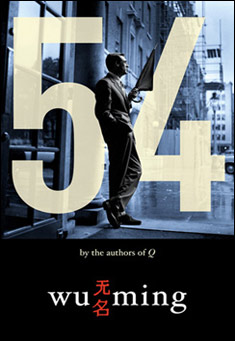 1954. Hollywood actors, cold warriors, mobsters, drug dealers and homing pigeons. What will Yugoslavian president Tito do, now that Joe Stalin is dead? What is the hidden link between Lucky Luciano in his Italian exile, Cary Grant in schizophrenic combat with himself and a stolen TV set which turns out to be self-conscious and sensitive to boot?

Wu Ming is the pen-name of a collective of five Italian authors, four of whom wrote the cult historical novel 'Q' The name of the band is meant both as a tribute to dissidents ("Wu Ming" is a common byline among Chinese citizens demanding democracy and freedom of speech) and as a refusal of the celebrity-making machine which turns the author into a star. You may also like to read Manituana, also by Wu Ming and free on Obooko.

The Slovenian people have launched an inexorable struggle against the occupying forces. Many of your comrades have already fallen in that struggle. And you will go on falling day after day, night after night, for as long as you remain tools in the hands of our oppressors, and until Slovenia is liberated.

Your leaders will lead you to believe that the Slovenian people love you, that you are being attacked only by ‘tiny numbers of communists’. This is an insolent lie. All Slovenes are in accord with the struggle against the occupying forces. Under the leader-ship of the Slovenian National Liberation Committee, our entire people has organised itself into a single invincible liberation front.

Understand what the Italian populace at home is coming to understand more and more, that Hitler is pushing you on all fronts: in Africa, in the Balkans, in France and in the USSR, so that you will be unable to form a resistance in your own country when he attacks ‘Allied’ Italy, just as he has attacked ‘Allied Yugoslavia’. Understand what any blind man must under-stand today, that Italy, as long as it gives allegiance to Germany, will suffer a terrible defeat at sea, on land and in the skies, at the hands of the united forces of Russia, Great Britain and all the freedom-loving peoples of the world.

Understand, Italian soldiers, that the only way out for you and for the whole of the Italian people is to turn your weapons against those who have brought both you and us nothing but misfortune, to turn them against Mussolini’s fascist gang! It is vain to claim that you too condemn the ********* of Hitler and Mussolini, that you too wish to see the end of fascism and the end of the war. You must use your actions to demonstrate your love of freedom and peace, your hatred of the oppressors, both yours and ours. Otherwise what awaits you is ruin, both yours and theirs.

The Communist Party of Slovenia appeals to you:
Do not carry out your superiors’ orders, do not fire on the Slovenians, do not persecute the partisans, but surrender to them, do not stand in the way of our liberation struggle!

by Pratibha A. Dabholkar and Earl J. Hess GOING HOME, written in screenplay format, is aimed at helping readers broaden their thinking about guardian angels, drea......