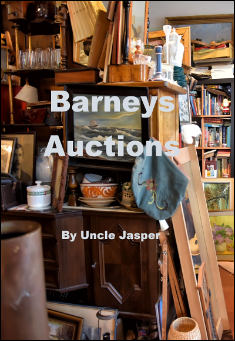 The colorful Barney battles everyone while running his auction room in post WWII Melbourne, Australia. He has no time for politicians, lawyers, rules or regulations of any kind, or suggestions that the wooden sheds he uses for his business are unsafe. The neighbouring market gardeners want compensation for a vehicle that runs amok, the local council has condemned his sheds, he is being sued over money found in furniture that was being auctioned and threatened with more legal action over the auction of a classic Australian painting. But far worse his daughter, who does not give an inch to Barney, wants to work in his business and marry his harried employee Don. Then there is the matter of the traction steam engine abandoned in a nearby street. There is always lots going on at Barneys Auctions.

In 1949 about three and a half years after the war ended, Barney found what he was looking for.

What he saw was a large, ungainly building, lingering in spite of the modernity that was creeping up on it. The odd looking structure fronted one of the main roads into the city. It had been built with a timber frame, the rest corrugated iron. Dilapidated, neglected.

Nailed to the centre one of the three large double doors a roughly painted sign proclaimed - For rent ask at forge. It too was weather beaten, and could have been nailed to the door months ago.

Barney stopped his car and went into the dingy interior of the forge. It was warm. Dimly lit by the fire, which had been allowed to die down. An elderly man sat on a rackety wooden kitchen chair and puffed tobacco smoke from a pipe with a short, curved stem. He wore a blacksmith's leather apron which fell to below his knees when he stood up.

"How much rent do you want for this old dump?" asked Barney.."

"Go in first, if yer like, and have a squiz at them." The man indicated a door that opened into the darkness of the middle store. "Lift the bar and open them front doors to let some light in and yer can have a good look round. Just close the doors and put the bars back where they were when yer finish.'

"Nuh! Yer can open them big doors, or strike matches, just as yer like."

"I wouldn't take a match in there, everything's dried out and ready to burn, the place'd go up like a bonfire."

Barney went in and unbarred the double doors which opened flat against the front of the building, partly obscuring the windows.

The building was divided into three. That is three large sheds made out of one very large shed and separated by flimsy interior walls.

It was big enough for what he wanted. A few bags of produce of some kind lay on low platforms that had been built around the walls which were of rusty corrugated iron, obviously second hand. The sun's rays pierced a few nail holes in the roof and directed downwards narrow little shafts of light through which dust motes were brightly illuminated as they floated by.

He soon found another door which opened into the third tenement. It was exactly the same size and appearance as the two others.

Satisfied that it was what he wanted Barney returned to the forge. 'I could use it,' he said. 'But the rent's a killer. I could go to three pound ten for this old rat castle but that's really straining the budget. I'll pay fortnightly in advance, too.'

"I keep tellin' yer,' said the blacksmith. 'It's five pounds."

"Well, it's going to be empty for a long time if you can't do any better than that."

"No I'm not, but I'm full bottle on the subject of rents, and you're asking too much."

The blacksmith knew how long it was since he had painted the sign and nailed it to the door. A few people had made enquiries about the property but they wanted him to knock down the old structure and put up modern shops in its place, then they would consider renting. Barney was the best prospect that had walked into the place for months, and he was talking about cash in hand.

“Yes you can. I should have me head read, but I'll go to four quid, that's me final offer. When I come back next month it'll be three pound ten shillings, and after that, ten shillings less, down to three pounds.”

"Alright,” said the blacksmith. "Yer not a bad bloke so I'll give you a bargain. Four quid, and I want two weeks in advance."

"OK' said Barney. 'It's against my better judgement, but I don't mind starving." He put a five pound note down on the anvil, and three one pound notes.

"I've run out of receipts," said the blacksmith. 'I been meaning to get another book, but I been busy and haven't had a chance."

"It doesn't matter, old timer, where I come from a handshake is better than a receipt any day. My name's Barney, and I'll be back tomorrow morning at six o'clock."

"Me name's George," said the blacksmith to Barney as he departed.

George was not unhappy at being beaten down by his tenant. Four pounds was not too bad a rent for the times. "While the war and the petrol rationing was on there were horses everywhere," he told acquaintances afterwards. "Now the rationing's finished, me business'll go the same way. All the cockies round here are buying trucks and cars now to cart their stuff to market, and that's no good to me. I'll keep the forge going for a while but if I can get two quid a week rent for it I'll retire. That'll be six quid a week altogether for the missus and me, we can live on that."

Barney arrived next morning in a blitz buggy bought in a government disposal sale. It had travelled thousands of miles through the outback during the war and had once been shot at during a Japanese air raid on Darwin. It still had bullet holes in it as a memento of the occasion.

by Ksenia Anske "My mama became a catfish when I was two, on the day I stopped talking." Neglected since birth by her mothe......