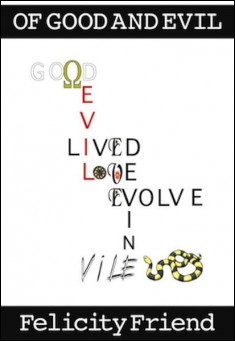 Of Good and Evil
By Felicity Friend

It is 1980. Archaeologists begin work in the Zagros Mountains in Northern Iraq. An English photojournalist, affiliated to the National Geographic Society, joins her brother and his team as they search for an elusive cave glimpsed by their father shortly before the advent of the Six Day War many years previously.

Before long, Ariadne has vanished. Her brother and his colleagues try to unravel the mystery of her whereabouts. They come across a diverse cast of characters including a Coptic monk, an irascible Muslim cleric and a garrulous walnut farmer, together with an assortment of young men — all either helping or hindering Jason Templeton-Smythe in his frantic search for his missing sister.

Ariadne discovers something that will change her life and affect many of those close to her. The mystery of what happened to her is solved but leads to an enigma revealed forty years later.

Ariadne Templeton-Smythe was delighted that the National Geographic had been eager to accept an article she had offered them last year and they had made noises suggesting that they would be very interested in her next project. Tabloid journalism had not been for her—as she rapidly found out. She had been grateful for her family connections in history and archaeology, happily joining her brother, Jason and her father on various expeditions to dig sites in many and varied parts of the world. Neither sibling had the slightest interest in settling down and both had been in relationships that often died a natural death—mostly due to their seldom being in one place for more than a few months at a time.

Spider believed herself to be no raving beauty: tall—but not in a classically statuesque way representative of mighty goddesses—she resembled, rather, a willow: slender, sandy-haired and sandy-lashed, with pale cream skin that had no business being out in the sun-baked sites and tells she so often frequented with her brother. Her most arresting feature was a pair of hypnotically gold-flecked meadow-green eyes that were, improbably, somehow complemented by her rather pale, bountiful long lashes. By contrast, Jason took after their mother: also tall—but somewhat more muscular, blue-eyed and dark-haired.

The archaeologists were in the Kuhhaye Zagros range in Northern Iraq, where Jason had been for almost two months now hoping to examine, among other tasks, an undiscovered cave. He had delayed his explorations to fetch his sister from Baghdad and was eager to make up for lost time. Other caves had been explored much earlier and the primitive wall paintings discovered were well documented. Templeton-Smythe senior had related to his offspring a journey he had made to this area of the Zagros in early 1967. He described seeing what appeared to be the entrance to an undocumented cave high up on the mountainside in this area. Before Jason’s father had been able to carry out any investigations he had needed to return to Baghdad; his hopes were further thwarted by the outbreak of the Six-Day War before he could return to Northern Iraq. Jason cheered his father, who was becoming rather frail though only in his sixties, by offering to continue his work in Iraq. This had been agreed, with the stipulation that Jason should keep his father fully informed, on a weekly basis if possible of any discoveries. Andrew Templeton-Smythe had made Jason the nominal leader for this expedition; there were one or two members of his team who were older than his son but he wanted him to experience what was involved in leading an expedition. His son was thirty now, after all.

Jason was keen to examine the cave, if what his father had seen was an entrance, as soon as practical as there was a growing sense of unease in Iraq. The team comprised a mix of Iraqis, Kurds, Coptic Christians and an assortment of Europeans and Jason was relieved that there were no signs of dissonance. Modern Iraq had existed in a restless state since its ‘creation’ after the First World War by British politicians. There had been a complete misunderstanding of the Arab mindset by those having lived in differing Western cultures for centuries. British Colonialism was not the first—and would probably not be the last—civilisation trying to assert a culture alien to diverse Eastern populations.

Jason had been following the route of the Sumerian migration, in reverse, and had at last reached Iraqi Kurdistan in the north of the country this spring. He was glad to have reached the Zagros Range, dividing Northern Iraq from Iran, as he was beginning to experience an increasing sense of anxiety. Jason wanted to pursue his father’s theories concerning the Sumerians and their early ancestors in the north of the country—and how they became so advanced in medicine and in creating written language in an astonishingly, even unbelievably, short time. Under normal circumstances he would not have wanted to be working in the Middle East in late June, but they would be investigating mountain caves—or so Jason hoped—so would not have to endure the increasingly desiccating summer heat of the archaeological sites near Baghdad. He was now extremely worried about the political instability within Iraq itself and between Iraq and Iran. The plan was for the Templeton-Smythe team to give a cursory examination of the cave system and then get out of the country, as they had been advised, if the situation became any worse.

The team rose early and were climbing to the elusively obscured entrance of the cave shortly after dawn on the morning after it had been spotted by Jason’s sharp-eyed sister. The narrow hole in the limestone face was almost totally obscured by a fold of rock and was visible only when the sun caught it for a brief moment. It was agreed that this had to be the cave Templeton-Smythe senior had spotted over a decade ago.

‘The climb should be reasonably easy,’ said Jason.

‘These mountain-folds seem to go on forever,’ commented Ariadne as she gazed, hands on hips, before following her brother and the rest of the team up the incline at the start of the trek. ‘I can even see snow way up in places!’

‘This range stretches south from here for almost a thousand of your English miles and divides into many, many parallel sub-ranges. They can be as much as 150 miles wide in places,’ said Leonardo Amici, the team’s geologist. ‘These mountains were formed at about the same time as our Italian Alps,’ he added proprietarily.

The team walked on, mostly in silence, concentrating on the slope ahead and taking care not to turn an ankle or trip on loose stones. Occasionally they would stop to catch their breath and admire the view of endless ranges of rocky vistas. They could hear the faint splashing and gurgling of a small stream hidden from view and an aroma of forest greenery wafted enticingly up to them on the early summer air.

After more than an hour of challenging scrambling and climbing, they came across a narrow gap in the folded rock formation, scarcely visible and barely wide enough to allow a man of healthy proportions to squeeze through. They discovered that they could now approach a further fold of rock that had hitherto looked out of reach. Two of the more portly members of the party were forced to remain behind, much to their disgust. There were mutterings of sincere vows to cut down on calorific intake. It looked as though the gap may have been a little wider at one time but rocks had either fallen, or been deliberately placed within the rock fold.