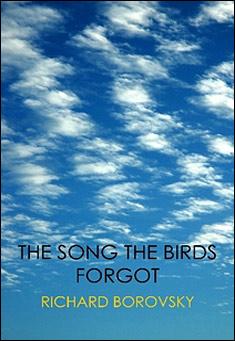 The Song the Birds Forgot
By Richard Borovsky

A tale of discovery, betrayal and illumination, featuring Jason Aeneas Finch, a young sculptor with a head-full of Greek mythology, lovingly instilled in him by his eccentric classics professor of a father. On the eve of his twenty-first birthday, Jason makes a vow so unprecedented that he believes it distinguishes him from all living people.

As a result of his unique resolution, Jason finds both enrichment and suffering. His adventures range from pizza delivery to cross country travel to journies to the metaphysical extremes of the Cosmos. He meets Cyrene, an aging, retired nymph, working as a waitress; Lord Poseidon himself; and a mysterious, eminently distinguished man of uncertain origins ...

That last day with Trixie was in 1999.  We were picnicking in the park and she was wearing a white summer dress with nothing underneath it.  It was late May.  It was my thirtieth birthday, and I was full of myself.  When Trixie stood up in the hot wind that was blowing that day, she was a sight to be seen.

She hiked her dress up over her knees and tiptoed around me on the grass.  “Like the Fairy Queen?”

We’d finished our lunch: cheese, sausage, bread and Champagne and were a little drunk—we must have been drunk to be going on about “A Midsummer Night’s Dream,” a play we’d both seen for the first time the night before.  We weren’t the Shakespearean theater-going type.   This wasn’t Midsummer but it might have been.  It was a hot day.  This wasn’t a dream, however: we were wide awake, at least in the conventional sense, we were.

“I don’t think they allow that,” I answered.  “Not here, right by the zoo and the conservatory.  If we wanted to do it, we’d have to find somewhere we could hide—like the Rookery.  That could be fun.”

“No, that won’t do. I meant by all these flowers.  Why don’t we try?  If we create the right state of mind and think more subtly than everyone else, we could be invisible.  You could.”

“Me?  Invisible?” I laughed. “Me?”  I took off my sunglasses, beamed at her, and put them back on.  We had laid out our quilt between two long, luxuriant flower beds next to the Lincoln Park Conservatory and directly in front of the Zoo, close to the statue of Schiller, the German poet and dramatist; and not that far from the Shakespeare statue just across the street.  Not only were we in the middle of things, but it was the first hot Sunday of the season.  We were surrounded by late tulips, yellow and gold; hot pink petunias and pansies in red, magenta and deep purple.  We were in a milling sea of people: multi-colored parents with multi-colored children; lovers, holding hands and not; packs of teenagers, ruly and un; oldsters, firm and infirm; people alone, some lonely, some not; and other picnickers too, but probably none as deeply in love as we.

“Sure, I’m willing,” I said, feeling the bubbly. “But I don’t want to give up this spot.  One of us will have to stay.  I know a liquor store over on Clark Street.  I’ll go if you like.” This was the north side of Chicago, close to Lake Michigan.

“Couldn’t we summon someone with Champagne?”

“You mean like the Fairy Queen again…? Or giving a homeless guy fifty bucks and ask him to buy us a bottle of the good stuff and keep the change?”

by K.A. Shott A movement meditation focused on Faith in the Era of SARS-CoV-2 (colloquially known as Covid-19). It is my distinct p......