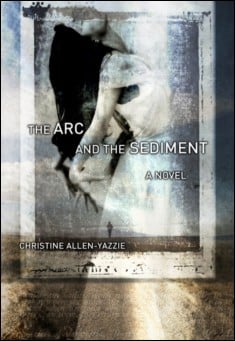 The Arc and the Sediment
By Christine Allen-Yazzie

Gretta Bitsilly, gin-steeped mother of two and self-proclaimed expert at standing outside the margins of ethnicity and peering in, has been all but eclipsed by the world that eludes her--as a wife, a writer, a skeptic in "the other land of Zion," Utah. Gretta has set off to Fort Defiance, Arizona, where she hopes to convince her Navajo husband, who has escaped not from his family but from alcoholism, to come home.

Over a sputtering two-steps-forward, one-step-back desert journey, Gretta is diverted by chance, seizures, an inconstant memory, and the disjointed character of her irresolute quest.

She is fueled by a volatile mix of rage and curiosity and is rendered careless by ambivalence toward her marriage--she knows a welcome mat will not be waiting for her, "that white girl" who can't seem to get anything right. On route Gretta finds herself lost in the landscape, in strange company, or in her own convolution of language and inner space. With a dictionary and a laptop she attempts to write herself into a better existence--a hopeful existence--and to connect points of intellectual, physical, even spiritual reference.

This tale, though dark and difficult, is infused with tart, twisted humor. Confused, disheveled, self-deprecating, and self-destructive, Gretta is also sharp and funny. Here, first-time novelist Christine Allen-Yazzie breaks apart her own narrative arc but with gritty reality seals it near-shut again, if in rearrangement, drawing us into Gretta's wrestling match with herself, her husband, her addiction, and the road.

Tonight Gretta will arrive sometime about midnight in Fort

Deﬁance, Arizona, to retrieve her husband in time for their ninth anniversary. Failing that, she’ll deliver to him his eagle-bone whistle. A three-legged Chihuahua will announce her arrival. Her little feet and broad shoulders will be admitted into a tidy if dilapidated single-wide where she is not especially welcome. If all goes as planned, Lance will follow her out of the trailer house and down the splintering stairs, and step into their pickup. Th  e two of them will stop at a motel just outside the reservation, look at each other like shame-faced dogs from either side of a well-worn queen-sized bed. It’s possible they’ll have makeup sex. Gretta has shaved her legs, just in case. In the morning, they will go home to their two children, who might or might not be sitting up in their beds. Together, they will deliver news of either a reunion or a divorce. Together, they will work out the details.

Or that was Gretta’s thinking at about seven o’clock this morning.