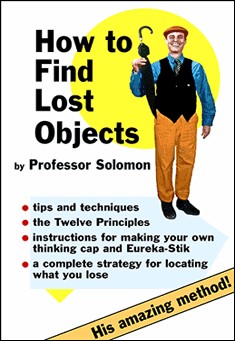 "How to Find Lost Objects" describes Professor Solomon's unique method for finding a lost object. It features his Twelve Principles, Ten Tips, Common Mistakes to Beware, and more. Included are instructions for making and using a Eureka-Stik.

It's an age-old problem - as old as the pyramids. And one that's not about to go away.

Every day millions of objects are misplaced around the world. Among them are wallets, rings, keys, scissors, sweaters, notebooks, eyeglasses, theatre tickets, important documents - you name it. (A circus elephant is said to have been lost recently in Florida!) Many of these objects are never recovered; possibly a billion dollars' worth annually. (Their sentimental value, of course, is incalculable.) Even more disturbing is the time spent looking for such objects. The average person could spend up to two months of his life searching - often fruitlessly - for things he has lost.

Then there's the "nuisance factor" associated with missing objects. The cars that can't be started. The books that can't be read. The business that can't be conducted. Millions of people experience such frustrations daily. It is something that touches each of our lives, and that can make a nightmare of an ordinary day - that can drive us to distraction!

But the incredible fact is this: each and every one of those objects - the tickets, the eyeglasses, the elephant - could have been found. Easily. Within minutes.

This Book’s For You!

You’ve lost your car keys, and are about to lose your mind.

Your day has ground to a halt. Your life is on hold. A glazed look has come into your eye. You’re going nuts!

All because of a missing set of keys.

You begin another search. Like a wild man, you rummage through room after room. Half an hour later, they still haven’t turned up. You throw your-self on the sofa and groan: “This is ridiculous!”

Finally, you check your pocket. For the keys? No, for the bus fare you’re going to need to get to work. It’s come to that.

Meanwhile, your neighbor has mislaid his check-book.

Less than a minute later, he has found it, and is coolly walking out his front door.

How did he do it? How did he avoid the frustration — the inconvenience — the loss of time — so often caused by misplaced objects?
Let’s ask him.

“Sir, how did you ﬁnd that elusive checkbook?”

“Why, simple,” he replies with a modest smile. “By applying the Twelve Principles.”

“That’s right. As outlined in HOW TO FIND LOST OBJECTS by Professor Solomon.”

And he continues on his way—while you are about to resume the frantic hunt for your keys.

But…maybe it’s time that you, too, checked out those Twelve Principles.

Maybe you’re ready, after all these years, to become a Finder, not a Loser.

If you think you might be—if you’re seriously interested in locating what you lose — this book’s for you.

by Hingori Once in a few hundred years comes a Siddh Guru who dedicates his entire life to making people aware of the dizzying heig......

by Hingori & Hannah The mind of your spirit will always be beyond your grasp, until you learn to identify with the ‘dreamer’ wit......