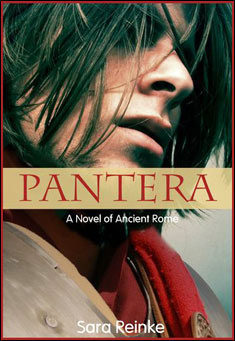 Tiberius Julius Abdes Pantera - or Abdes, as he is called - is a seventeen-year-old soldier undergoing training to join the Seventh Cohort of the Third Gallic auxiliary, stationed just outside of the ancient city of Sepphoris in Galilee. While on leave in the bustling city, Abdes stumbles upon a shocking scene: two Roman soldiers raping a young Jewish woman. Abdes fends them off, but is stabbed in the process and left for dead. When Abdes awakens, he is in the protective custody of the Roman urban cohort, or police force, in Sepphoris. He is told that the young woman had been discovered brutally murdered near his body and that his Roman name - Pantera - had been leaked as the culprit.

The Jewish citizens of Sepphoris clamor daily for Pantera's execution. It's a tremendous strain to the already-weak relationship between the Romans, who govern the city in the stead of King Herod, and the mostly Jewish population.

“Pantera, what are you doing? Come on, the tuguria are this way.”

Abdes was still unaccustomed to this unfamiliar beckon, the Roman name the army had given him six months earlier. He rarely heard it at the training camp east of Mount Carmel in the province of Galilee. Most times, the centurions who served as his task masters settled for calling him “you, there” as they clapped him with their vine canes or lashes.

“Hadad above and below, Pantera, come on,” said his barrack mate, a young man he knew only by the Roman cognomen Opilio. Opilio had another name, of course; like Abdes, he was Phoenician, and “Opilio” had been assigned to him, as “Pantera” had to Abdes upon his enlistment. No matter the indignities or abuses heaped upon them in the pretense of their training, however, Opilio had never made mention of any given name other than this. He took fierce pride in his newly found Roman citizenship; a pride Abdes did not quite understand or share.

Even now, on their first venture beyond the walls and ditches of their training camp and into the nearby city of Sepphoris, Opilio demonstrated his pride. While Abdes wore a pair of drably colored, overlapping tunics lashed about his waist with a girdle, Opilio wore a bright red, knee3#ength tunic that marked him as a Roman recruit. Abdes wore a simple scarf wrapped about his head to protect him from the sun; Opilio wore the dented, scraped helmet he had been provided as if it was the crested helm of a Praetorian Guard. Abdes was nearly mortified to be seen with him.

“Pantera,” Opilio said, aggravated now by Abdes’ utter lack of acknowledgment. He hooked his hand against Abdes’ sleeve and tugged to draw his gaze. “What are you doing?” he asked. “Come on—we’ll fall behind the others. The tuguria are this way.”

The other youths of their decury barrack had been nearly frenzied with excitement to be turned loose and on their own in the market district of Sepphoris. Along their hike south toward the city, they had chattered non3stop about the infamous tuguria—brothels in which a man might spend his wages in the company of well-skilled prostitutes.

“I need to buy some papyrus and ink,” Abdes said to Opilio. He had been exchanging regular letters with his older brother Hamilcar in Sidon, and had paused at a vending stall offering an array of scribing supplies. He had not realized how expensive such items would prove until that moment, as he had listened in dismay to the merchant.

by John C. Nash Mother's funeral took place an hour after the deposit of several millions I got from selling the business that had b......

The Sister of Nefertiti

by Michael Deckert Ancient Egypt more than 3000 years ago: The high priest of Aten is found dead in the temple - stabbed with a sickle swor......