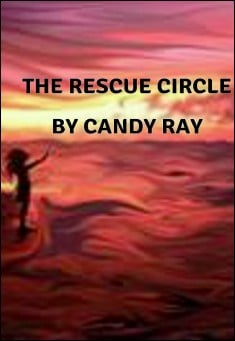 Ryan is a young magician from an English magical lodge, He undertakes a dangerous quest to become a psychopomp, a guide of the dead, and to find his true love who has gone hitchhiking without him. During his trance he encounters angels, gods, djinn and troubled souls, and joins a rescue circle of Spiritualists who are more skilled than himself.

Meanwhile his absent girlfriend, and one of the girls from the rescue circle, are on separate quests of their own in the physical world.

Ryan was obsessed with joining a rescue circle. He had been studying tirelessly and doing preparatory work and now he was fully qualified; they would have to accept him. The necromancy book before him on the desk had been helpful, but he was planning an extreme ritual of his own devising in which he would bury himself alive in an underground cave and make sure that he would either pass the test or die. He would come through the ordeal triumphant to become a psychopomp, a guide of the dead, while still alive on Earth.

The day arrived, and he was ready: clad in a diving suit for reaching the submerged cave which would likely be fully flooded in about five weeks’ time, and with the rest of his gear in a carrying case that he could strap behind the shoulders of the diving suit.

He had perfected his own method for going into a trance, a combination of counting, breathing techniques and meditation on the void. Once he was deep into the trance he would leave his body in suspended animation on the floor of the cave, having set up psychic defences to prevent anyone interfering with it.
He would travel to the realm of the dead and go straight to a group of psychopomps who could cross both the great divide between Earth and the astral plane, and the divide between the higher astral plane (Heaven) and the lower astral plane (Hell). He would show them that he could do the same and was qualified to join them. When they had accepted him, and he had been acting as a guide to the newly deceased for a short while, he would return to his body and wake up, and after that he would be a guide every night during his sleep. He had it all planned.

Ryan stood on the shore, looking thoughtfully at the dim water with its salty lines of thin foam. In his mind, he could see Marianne: her hazel eyes and aquiline cheeks, the way she picked nervously at the handle of handbags she carried. After this grand ritual, when he had been accepted into a rescue circle, next on the agenda would be to find Marianne. However great a traveller he might become in the world of the dead, there was no reason why he shouldn’t have his chosen companion beside him in life.

He launched himself into the water. Jumping off felt like a turning point, his entry into a new phase of life. Through the visor he could see a blurred image of the roof of the cave beneath him.

The tunnels twisted like the labyrinth itself, so that it wasn’t clear how the submerged cave could be dry inside during this part of late summer-yet it invariably was. He swam down diagonally and wriggled through the main tunnel, pushing himself along by the walls on either side. Then he was in the cave.

It looked like something out of a ‘Tomb Raider’ game, with a great shelf ledge jutting out from a stone wall. The walls rose up, pitted, and yet in between the pits they were all washed smooth by the water that flooded the cave with such regularity.

Ryan found a recessed area wide enough to lie down in, so that his head would be next to the great shelf and his feet pointing into the middle of the cave.  He took off his diving gear, stacked it carefully to one side and tried out the position. Perfect! He might as well be sunbathing on his favourite beach in the coastal resort nearest to his hometown – the one nicknamed ‘The Blistering Walls’ because it was a suntrap with sides like a cliff.

A few moments ago, before he dived, he had been tense like steel rope wrapped round and round in a bale, ready for his ritual, yet now he felt suddenly in danger of falling asleep.

With an effort, he sat up and cast a defensive circle, pointing with the single black stick that was the only tool he had allowed himself. It had come from the sea, a piece of driftwood that he had honed by carving it with his penknife. He drew several designs around the circle and wrote various sacred names in the sand.

The rest would be done purely by the force of his mind, and now he lay down again and began the breathing techniques. After those would come recitations that he had carefully prepared, featuring the name of Anubis, and then meditation to take himself more and more deeply into trance.

He fidgeted slightly, something he usually no longer did, and a picture came into his mind of the cave flooding earlier than it was supposed to. Like an unpredictable inundation of the Nile, like the unexpected freeze which killed the explorer Robert Scott, the flood tide in his imagination rushed upon him intent on drowning him and thwarting his intentions.

He reminded himself of the plan. As soon as possible he would become awakened as a psychopomp, before the weather had time to change, and then from this vantage point he would view the environment in which his body lay and keep an eye on any changes that might occur. He would time the point of his waking in accordance with this information.

With a rush of determination, Ryan returned to the breathing exercises and then on to the rest of the prepared ritual. He felt the trance about to take hold of him.