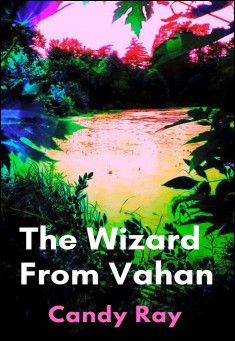 Free book: The Wizard From Vahan
By Candy Ray

Jasper is an apprentice magician in a society of the future, where chaos magic has become the dominant religion. He does a time-jump which is supposed to be a meditation, but it goes wrong, and he finds himself in a parallel world about to embark on a mission that he does not want.

He encounters Emin, an advanced magician who agrees to swap places with him, leaving Jasper in his retreat up in space. Soon Jasper has to use his emerging magical abilities to return to the planet, and fight the aliens who are threatening its people and the girl he loves.

Jasper’s time jump took him to a strange planet with a red sky, where he was strapping on armour. That wasn’t what he wanted. He was not on the warrior path; he was a mystic, and the time jump was part of his esoteric training. Jasper was twenty years old and still only in the first year of his studies, but already he was bending time.

He paused in pulling on the metallic sleeve with its lining of netting and tried to change from a war theme to a ring of cosy village huts around a thriving market. That was his ideal, but he couldn’t manage to dream an alternative reality, so the armour scenario continued, with the addition now of a page solemnly holding out a sword to him on a cushion. As the blade caught the light this was obviously supposed to be a thrilling moment, but he wasn’t thrilled and sought again for a means of escape. There was none; he found himself in a large field in front of a castle, the field bordered by a row of miniature hedges, and a crowd was assembled watching him expectantly.

The page’s lips parted, and he whispered something reverent although too soft to be heard, and Jasper wished intently that he could find something other than the sword to seize upon: a magic wand, perhaps, with a sparkling crystal at the top? Or a scroll with inspirational writings inscribed on it in fine inks?  But the crowd was waiting, so he finally lifted the sword in the air and cried, “I pledge to bring peace and creative art to this kingdom, not war.” He appeared to be speaking in his native language.

A cheer erupted, and that at least was welcome as golden beams slanted down mixing with the red in the sky and glinted off the sword once again.

More armed men came forward from the side of the castle, and began to march. Jasper found himself marching at the head of them, and he only knew which way to go because a scout on horseback indicated with an exaggerated gesture and called out, “this way!”

He was seriously thinking about doing a second time jump but his superiors in the Void Star Lodge had advised him to leave at least a week between them, and they had also said that it was fine for the journey to be all in his head in meditation or a dream, as it usually manifested. Except that this wasn’t; it was completely physical and real. A distant memory nudged at his mind of a film about time travel he had seen in his childhood, in which the protagonist once came to and found himself naked on a battlefield. As they marched along he saw a faint blue vortex etched on the sky and wondered if it belonged to another time jumper who was also going to find this too real for their taste.  If so, maybe they could get acquainted. Maybe it was a beautiful girl?

His reverie was interrupted by the scout calling out, “Turn left!” He changed direction, and as the others followed him the countryside changed too and became more rugged, although there were still some green plants. All the vegetation was quite different from what he was familiar with on Earth. On one side they had passed by many enormous brown fronds waving and towering above them. Near the ground were thick, silky blades like large reeds and various unknown flowering bushes.

After a few hours’ marching they reached a sheltered gully where they stopped, and a number of the men began to set up camp. As Jasper seemed to be their leader he knew there was no need to help them, which at least spared him the indignity of the others finding out that he knew nothing of how to do it. He sat down on the ground which was a mixture of small rocks and the reed-like blades of grass, and began to review his position seriously.

No doubt he would soon be expected to fight, that being the purpose of the sword and armour, and the only form of combat he had ever learned was a martial art intended primarily for spiritual training, known as Combat Unlock. It was Void Star’s own, and despite their belonging to the Chaos Magic tradition it was based on the same principles as its predecessors in the old world such as Kung Fu and Tai Chi. Defence was preferable to attack, and the main aim of the training was to strengthen and purify all the vehicles: body, mind and soul. In this year of 2091 Chaos Magic had become the dominant branch of the esoteric and was respected, unlike its beginnings in the twentieth century when it was a fringe interest of a rebellious minority.

Jasper didn’t want to be branded a coward, but there was no way he could possibly enter on this form of warfare using swords and shields without any experience and avoid either being killed or wounded or discovered to be an imposter; maybe all three of these would happen one after the other. It was imperative to find a way of exiting the situation. He wondered what had happened to the real knight he was supposed to be. Had they somehow switched bodies, or was the original knight imprisoned somewhere either in flesh or in spirit?

by John Jones Do you believe in astrology? No? You soon will. A trip to the funfair sounds like a good day out doesn't it? N......

by Gilbert G. Beeraj A girl who has spent years in exile in the wake of an injustice; a priest who returned home to find his beloved city at......