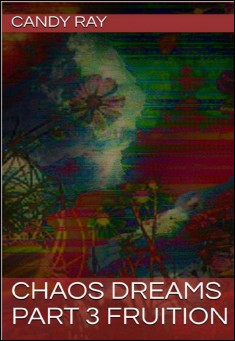 This is a compilation of three fairly long stories about chaos magic.
In the first, chaos magicians create an egregore and a servitor, and these creatures make their lives much better.
The second is the story of a lady game designer, her cute servitor, tarot cards, an angel and a demon.
The third story was channelled from Ino, and the main character is based partly on herself. It is about a spirit from the mineral kingdom who finds herself within a bead in a ladies’ necklace, and becomes closely involved with her family.

Ted’s room was untidy, littered with folders and unopened packets of pens, empty takeaway food boxes, and his all-important magical notes in a pile that leaned dangerously and threatened to fall off his windowsill. He tried hard to concentrate on daily mental exercises and to organize his notes, but often something didn’t gel.

Ted’s main teacher was his girlfriend Lucy, perhaps not an ideal situation for keeping his mind on the lessons in chaos magic. Still, she was quite brilliant at explaining entity creation: Ted followed her instructions to the letter, and it appeared to be a success.

The new servitor Bidskimmer eased himself through the wall and ventilation pipe into the businessman’s office. He was here on behalf of Ted, who wanted sponsorship to turn his little magazine into a book.

Trev, the owner of the office, had been Ted’s friend when they were at school and owed him a few favours, but in the intervening years they had lost touch. It was easy for the servitor to find him, but not so easy for him to understand the environment of the office. There was stale cigarette smoke hanging in the air; that didn’t touch him, it might as well have been on a cinema screen.
Emotions were what he understood.  Trev’s mind was a morass, the surface broken by a vaguely uncomfortable “Why am I here?” feeling.

Bidskimmer stood by Trevor and began to repeat “Ted, Ted, Ted.” Not “remember Ted”, although that was what it would mean to someone like Trev who had been conditioned and socialized in human society since his birth.

Trev shifted uneasily in his plush chair. Now there was emotiona bolt of it, which knocked against Bidskimmer as he hovered there. Apparently, Trev had always sorrowed over the belief that he wasn’t as good as Ted. It dug into him when they were together-little needles pricking his brain again and again. The suffering this caused had played a part in them losing touch.

Bidskimmer examined the data to see if it was helpful, and decided not. He knew Trev’s belief made no sense, because here he was at the top of his profession, while Ted was struggling and hoping someone would help him. He projected this idea, that it was nonsense, pointedly towards Trev. Trev rejected it. The servitor was puzzled, for he was too new to have learned much of human affairs.
There was no-one else as suitable as Trev, who was now getting back to work and becoming immersed in the business statistics he was analysing. Bidskimmer decided that he would have to persist-persuade him to contact Ted and then he would discover the truth. The truth being that he had succeeded because he was driven:  a nasty kind of slow torture in the affairs of human beings that produces a jangled mix of prosperity and inner pain.

Just as Bidskimmer was turning away to await a time when Trev was less busy, more unguarded, his eye fell on a painting above Trev’s desk. It was mainly circles and vortices. Some painter must have anticipated his need. He popped straight into the largest circle, and from there planned his campaign. It would entail much tedious listening to telephone conversations with Trev’s business contacts, his mistress and his wife. But Trev was squarely in the frame where he belonged, in front of Bidskimmer at all times.

A few weeks later Trev was typing an E-mail to his friend Max. “Some days my life seems perfect. That was my dream, to have it all. Then other days I feel different, as if I’ve screwed up. I can’t even stick to Jenny. I tell myself she wouldn’t mind about Megan, but really, I know she would. I find myself thinking about Ted a lot. I feel I owe the world for my screw-ups. Hell, I owe Ted. Wonder where he is now?”

The office was uncomfortably quiet at four in the afternoon. Trev’s secretary brought tea and coffee, but that didn’t lift the pall of patched darkness that had nothing to do with night falling early in winter. The blinds sheered across his vision, like a curtain of vibrating speckled grey. Trev flicked his computer to sport for two minutes, then to the news headlines for one minute, and then back to his work screens.

To him the computer was purely functional. He would never have suspected the bots and other programs could have a social life, or that Bidskimmer was participating in what for a human would equate to finding a local club that turns his leisure time right around and sends his self-esteem and contentment up several notches. He never knew how it happened that he got onto the page for Ted’s magazine, with its gripping content and full contact details. All he knew was that it was suddenly a good day as he typed “Ted! Let’s talk.”

Pete was lost somewhere on the subway. He couldn’t remember where he got on or what he was doing beforehand. He simply found himself there, slumped in a corner seat with his eyes vaguely registering the dark lines of the tunnel flashing by.

Suddenly the train emerged into the open air. The skyline looked unfamiliar, and for a moment he was terrified in case he was on an alien planet. There had been someone with him yesterday who was going to fix all the deals for him and get him everything he wanted. The memory was fuzzy; had he been an alien?

Now the train was pulling into a station. A small group of passengers stood waiting, clustered at one end of the platform. They were obscured by a cloud of cigarette smoke which made them look indistinct, as if they didn’t belong to this world. Pete looked at them uncritically, and then thought again about the being from yesterday. He’d seen it before, in a painting somewhere. It was wearing a suit and carrying a briefcase. He felt a jolt-could it be Mephistopheles? That’s how he was usually depicted, on the stage and in films.

Pete looked furtively over his shoulder, a little ashamed of his wish to swing all those deals. He wasn’t even working in a high-flying profession with wildly fluctuating profits or stocks and shares. He worked…. where did he work? Now he felt a tinge of panic. Was this a coma, or an alien abduction as he had thought before? Or could it be the dope? His determination to experiment with drugs was matched by an equal amount of caution and trepidation. He must have overcome the caution some time yesterday, before he got on this train.

The train was in the act of pulling into another station. Pete strained his eyes to see the name on the sign, to try and ascertain whether it was near to where he lived. ‘Bidders Gate’ it said. He closed his eyes and tried to concentrate on remembering where that was. Bid…that’s right, it came to him that the character from yesterday was called Bidskimmer. He could see him again now against his closed eyelids, insubstantial and flickering in and out of form. “Yes”, Pete muttered. “I’ll do it.”

“Are you talking to yourself?” He opened his eyes to see the hard, unsympathetic face of another passenger, a middle-aged man sitting opposite him. “I’d go home if I were you. Clean yourself up.” The other passenger rose quickly and walked away down the train. Clean myself up? Pete wondered how he must look, and then abruptly decided to get off at the next stop and give his address to a cab driver. If he stayed on here for too long it would cost him a lot of money, and he would very likely still not recognize any of the stops.

One long and far too expensive cab drive later Pete was back in his own home. Despite what had just happened to him he felt faintly optimistic, as if something in his life was about to improve. He had a shower and ate a quick meal, mainly toast. Then he phoned Ted’s number.

“You won’t believe the strange s**t that happened to me today,” he began.

“Try me. Since I’ve been a mage, nearly everyone who speaks to me says what you just said.” He could hear the triumphant grin in Ted’s voice.

“Maybe I could get into that too. As long as it isn’t all like today-waking up on a train, don’t remember who I am, an alien in my head, and it cost half the week’s wages to get home.”

“No, really not bored. Can I come over one day and talk about this magic stuff?”

“Sure,” said Ted. “So long as you don’t hit on Lucy to be your teacher instead of mine.”

The conversation ended with a lot of jokes on that subject.