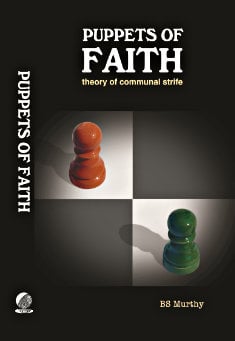 "On one hand, this ‘book of logic ‘n reasoning’ appraises the Islamic faith shaped by the sublimity of Muhammad's preaching in Mecca and the severity of his sermons in Medina, which together make it Janus-faced to bedevil the minds of the Musalmans.
That apart, aided by “I’m Ok – You’re Ok”, the path-breaking work of Thomas A. Harris and Roland E Miller’s “Muslim Friends–Their Faith and Feeling”, this work for the first time ever, psycho-analyses the imperatives of the Muslim upbringing that has the potential to turn a faithful and a renegade alike into a fidayēn.

On the other hand, this work, besides appraising the monumental rise and the decadent fall of Hindu intellectualism, analyses how the sanātana dharma came to survive in India, in spite of the combined onslaught of Islam and the Christianity on Hinduism for over a millennium.

Possibly in a new genre this free eBook is a book for our times."

It would be interesting to speculate what would have been the religious tenor of the Hinduism and its early derivatives, the Jainism and the Buddhism, if only the tribes of India were equal to the task of thwarting the Aryan domination in their individual domains. Would it not have brought about a confrontation between the Aryan gods and the deities of the others? Wouldn’t have Indra, the Aryan spearhead of a god, forced them into a covenant with Him to destroy the alien gods of the rest of the Indian tribes? Fortunately for the Hindu spirituality and the Indian philosophy, that was not the case. Though Indra spared the local deities of his wrath, his wards were less considerate to the souls of the very land they coveted.

As the brawn of the newbies should’ve successfully relegated all other tribes, save those from the hilly habitats - they were out of reach, and, besides, would have been beyond their interest - into subordinate castes, their Brahman brain got into the act of drafting the dharma in the Rig Vedic mould. However, it was only time before the Aryan’s political conquest of the Bharata Khanda was conceptualized through aswamedha yāga of Yajur Veda. At length, when the kshatriyas were on the conquering course, the Brahmans went about composing two more Vedas - sāma and adharva - to define the spiritual tone of sanãtana dharma, which in latter-days evolved into Hinduism.

In due course, the breadth and depth of the Brahman intellect, nourished in the comfort of the Indian climes, came to shape, first the Brahmasutras, and then the Upanishads, as adjuncts to the four Vedas. And that fashioned the Hindu Vedanta of yore; but, the culmination of the Brahman thought process and the crowning glory of the Hindu philosophy is the Bhagvad-Gita, aka Gita. The intellectual achievements of the Brahmans have so fascinated the modern philosophers and scholars of the West that they went eloquent about them.

Jawaharlal Nehru thus compiled the eulogies of Western scholars about the Hindu intellectual achievements, symbolized by the Upanishads and the Bhagvad-Gita in ‘The Discovery of India’, published by Oxford University Press.

“Schopenhauer felt that “from every sentence deep, original and sublime thoughts arise, and the whole is pervaded by a high and holy and earnest spirit…. In the whole world there is no study…. So beneficial and so elevating as that of the Upanishads…. (They) are products of the highest wisdom… It is destined sooner or later to become the faith of the people.” And again: “the study of the Upanishads has been the solace of my life, it will be the solace of my death.”

“Writing on this, Max Mueller says: Schopenhauer was the last man to write at random, or to allow himself to go into ecstasies over so-called mystic and inarticulate thought. And I am neither afraid nor ashamed to say that I share his enthusiasm for the Vedanta, and feel indebted to it for much that has been helpful to me in my passage through life.”

In another place he says: “The Upanishads are the…. sources of … the Vedanta philosophy, a system in which human speculation seems to me to have reached its very acme.”

Max Mueller’s wonderment about the Upanishads seems unending going by what Nehru quoted:

“I spend my happiest hours in reading Vedantic books. They are to me like the light of the morning, like the pure air of the mountains - so simple, so true, if once understood.”

“Formulating his admiration for the Hindu thought and culture, he further said that,” Nehru continued, “there is, in fact, an unbroken continuity between the most modern and the most ancient phases of Hindu thought, extending to over more than three thousand years. If we were to look over the whole world to find out the country most richly endowed with all the wealth, power and beauty that nature can bestow – in some parts a very paradise on earth – I should point to India. If I were asked under what sky the human mind has most fully developed some of its choicest gifts, has most deeply pondered over the greatest problems of life, and has found solutions of some of them which well deserve the attention even of those who have studied Plato and Kant - I should point to India. And if I were to ask myself from what literature we here in Europe, we who have been nurtured almost exclusively on the thoughts of Greeks and Romans, and of one Semitic race, the Jewish, may draw the corrective which is most wanted in order to make our inner life more perfect, more comprehensive, more universal, in fact more truly human a life, not for this life only, but a transfigured and eternal life - again I should point to India”

Is This The Kingdom of God?

by Brian E. R. Limmer What constitutes a Kingdom? To belong to the Animal Kingdom, you have to be an animal. Likewise, only plants can be a......

by Dickson O. Adelusi This book is written for all souls caged in flesh, called humans, to enlighten them about the world before they came int......