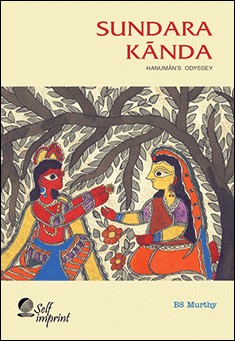 Sundara Kãnda (the beautiful canto) of Valmiki Ramayana the adi kavya (the foremost poetical composition) is a rare work of art that is embellished with all nava rasas (nine emotional / aesthetic impressions). What is more, as the following verse illustrates, it was the forerunner of the magic realism of our times - "Gripped she then him by shadow /

Cast which Hanuman coast to coast; Recalled he in dismay then / What Sugreev said at outset / That one fiend had aptitude / To grip its prey by mere shadow".

Magic realism and miracles apart, Sundara Kãnda tends to inculcate fortitude and generates hope in man for it is a depiction of how Hanuman goes about his errand against all odds. Besides, it portrays how Seetha, on the verge of self-immolation, overcomes despair to see life in a new light and how Hanuman's Odyssey paves the way for Rama to rescue his kidnapped wife.

Hanuman's Odyssey the transcreation of the Sanskrit epic nonpareil that is Valmiki's Ramayana is bound to charm the readers by its rhythm and flow.

Egged on by peers Vayu’s son
Enshrined by man as Hanuman
Enthused himself to shoulder
Search of Seetha, Rama’s spouse
Snared whom Ravan to Lanka
Sea across that hundred leagues.

With his head then held so high
Gained he size for task on hand.

On that Mahendra mountain then
Colossus like he sauntered there.

Uprooted were trees all those
Brushed as with his chest that strong.

Varied hues of elements there
Made that mountain resplendent.

Grace angels those hill ranges
For their honeymoon so near moon.

At length he reached that hilltop
Lay where elephants in their scores.

Besides Brahma ’n Surya
Prayed he Indra and Vayu.

Facing east he sought blessings
Of Vayu then his Wind God dad
And grew more by turning south.

Grew as Hanuman more and more
To cross that sea vast as it roared
With full tides of full-moon night
Came he face to face with clouds.

As though to test that mountain
Whether it’s right for his take-off
Tapped it Hanuman with his feet.

Flowers all fell then covered it full
Spread they fragrance far and wide.

Welled out water in thick springs
Such was pressure of Hanuman’s feel.

From the cracks it developed thus
Creaked out molten metals varied.

While huge boulders slid in scores
Out came smoke in thick columns.

With that squeeze it came under
Cried all creatures in their caves.

Frightened was no less wildlife
Heard were their howls world over.

In their state of confusion
Serpents with all fiery fangs
Marks of swastik on their hoods
Spewed then venom in profusion.

Venom they spit was fireball like
Turned to tiny stones there rocks.

Herbs of anti-venom were there
Turned though antidote none of them.

Felt all yogis spirit at play
Took to their heels demigods then.

Not to speak of vessels of gold
In their fright gods left all goods.

In panic they left mid-meal
Thought they none of gold armour.

by John Paul Kirkham Gemma Galgani was the very first canonized saint to have lived in the twentieth century. A young girl who lived her life......

by Brian E. R. Limmer Are you a toe-dipper or a surfer? Surfers get in amongst the waves. They search for patterns. They do not jump on eve......