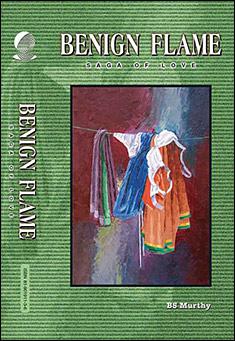 The attractions Roopa experienced and the fantasies she entertained as a teen shaped a male imagery that ensconced her subconscious. Insensibly, confident carriage came to be associated with the image of maleness in her mind-set. Her acute consciousness of masculinity only increased her vulnerability to it, making her womanliness crave for the maleness for its gratification. However, as her father was constrained to help her in becoming a doctor, she opts to marry, hoping that Sathyam might serve her cause though the persona she envisioned as masculine, she found lacking in him. But as he fails to go with her idea, she becomes apathetic towards him, and insensibly sinks into her friend Sandhya's embrace, for lesbian solace.

When she comes in contact with Tara the suave call girl who tries to rope her into her calling to achieve which she introduces Ravi the seducer; swept off her feet though, Roopa resolves - "my craving is all about romancing with that elusive he-man of my dreams and not to lust as the mistress of some moneyed. Nothing more and nothing less, that's for sure."

However, as Roopa goes to attend Sandhya's wedding, her encounter with Raja Rao the groom runs thus: "As though guided by her charms, he found himself walking up to her without taking his eyes off her. But she stood rooted and fixed her gaze at him as if the slightest tilt on her part might distract his path of attraction. As he came near her, she insensibly extended her hand as though to ensure he wouldn't trip in his trance. While he took her hand, as if to hold on to the summit of his life, energized by her dormant desire, she found herself pressing it in all eagerness. As they held their hands thus, their eyes were locked, conveying to each other the convulsions of their souls. Lost as they being enamored, they had no words for each other. In time, heaving a sigh on hearing Sandhya's approaching steps, as though to alert him, she pulled her hand and wrenched her look. As if cut off from the life force itself, his heart was seized and his hand dropped."

When it dawns on Roopa that she is consciously coveting Sandhya's man, she rationalizes her proclivity thus: 'Why didn't my conscience caution me while my infatuation coveted her man? Is it because it's love that's at the root of my passion? After all, I'm not out to snatch him from her, am I? Of course, I wish to bestow my affection on the man whom she seems to adore. Given our lesbianism, what's wrong if I want to augment her man's happiness with my body and soul as well? How thrilling it could be for the three of us in a grand liaison!' But as Raja Rao and Sandhya live in far away Delhi, bogged down by uncertainty, Roopa lives in misery. And as if to complicate matters for her, enters Prasad, her husband's friend lecherous friend for whom - "Almost every dame in her youth is beddable. While some may be repeatable, rarely are they keepable. But, each of them is obtainable, though with some of them it may take some time and effort even. All said and done, the quick-fire affair affords man ego satisfaction as well as ready gratification. Besides, won't that make it easy for man to bring the curtains down, when it suits him? It's as well; women tend to hang on to the illicit stage that much longer."

The scheming Prasad induces Sathaym to go the corrupt way besides weaning him away from Roopa with the aid of ****** to make his path clear to her amour and that throws her into a dilemma - "After all, I can't be expected to soothe every man who craves for my body, could I? Maybe, I should've welcomed him, if only I'm not myself in love. Seems misplaced love is wasteful for it serves no purpose, save massaging the ego of the one who is loved. Perhaps, it's another dirty trick of fate on my life - to keep the love I need hanging in the fire, and throwing in my lap the passion that doesn't help. Am I not guilty in abetting his love with my flirtation, even though unwittingly? Maybe, but how have I failed to notice his suffering, when he's supposed to be in such a turmoil. Is he not play-acting love to worm his way into my heart? Isn't it strange that the emotions of love and the afflictions of lust are look-alike, bewildering women from discerning the lover from a seducer! Unfortunately for women, the language of love and the dialect of lust have a common alphabet causing this confusion.'

At last fate puts Raja Rao into Roopa's arms when he says - 'Roopa, you know how I love you, I'll do everything to make you happy. All said and done, our love is only a part of your life. In spite of our love life, should you remain perturbed in your married life, you would still be unhappy. Better love your husband and make him happy so that you could be happier yourself. Only your all-round happiness would make me feel gratified in our love life.'

She sat up electrified, and smothered him with kisses crying in ecstasy - "I've always felt I loved the right man. But now I know that I've a noble soul for a lover. I promise you dear that for your sake I shall love him as much as I possibly could."

How the tale ends is best described by an American critic, Mr. Spencer Critchley, thus: "It's a refreshing surprise to discover that the story will not trace a fall into disaster for Roopa, given that many writers might have habitually followed that course with a wife who strays into extramarital affairs."

Who said the novel is dead; 'Benign Flame' raises the bar.

That winter night in the mid-seventies, the Janata Express was racing rhythmically on its tracks towards the coast of Andhra Pradesh. As its headlight pierced the darkness of the fertile plains, the driver honked the horn as though to awake the sleepy environs to the spectacle of the speeding train. On that, in the S-3, were the Ramaiahs with their nine year-old daughter Roopa.

Earlier, from Ramavaram, it was in the nick of time that Ramaiah took Janaki to Vellore for the doctors to extricate her from the jaws of death. Now, having been to Tirupati for thanksgiving, he was returning home with his wife and Roopa they took along for the sojourn. While her parents were fast asleep, Roopa sat still on a side berth, reminiscing her times at the hospital where Janaki took one month to recuperate under Dr. Yasoda’s care.

Soon the train stopped at a village station, as though to disrupt Roopa’s daydreams of modeling herself on the lady doctor at the Christian Medical College Hospital, and as she peeped out, the ill-lit platform seemed to suggest that the chances of her being Dr. Roopa could be but dim. Ramaiah too woke up to the commotion caused by the incoming passengers, and was surprised to see his daughter still awake, lost in her thoughts.

“My darling,” he said in jest, “what are you scheming?”

“Want to be a doctor,” she said as though in a trance.

“Didn’t the nurses say,” he said affectionately, bringing her escapades at the hospital back into her mental focus, “you’re a junior doctor?”, and pleased with her idea, he patted her to sleep, even as he recalled his anxieties associated with her birth.
Ramaiah was jolted from his reverie as someone in the compartment switched on the light, to prepare himself to alight at the coming station.

‘Surely she would shape up into a dusky beauty. Won’t she be bright as well?’ he thought, looking at Roopa in her deep sleep, and recalled her escapade when she was hardly three.

“You know how clever Roopa is?” said Janaki, at bedtime. “She wanted the timepiece to fiddle with and when I refused to give in, she cried no end. When she forgot what she was crying for, she cried to know why she cried at all! What a unique girl our Roopa is!”
As the train moved into a major junction, Ramaiah got down, looking for a coffee vendor. Unable to find even a tea vendor, he lit his Berkeley without a beverage. When the guard whistled the start, a half-naked urchin jostled past Ramaiah into the bogie to crouch in the vestibule. While the train was on the move, Ramaiah wondered whether the urchin had crouched to draw warmth from his heart to ward off the chillness, and pitying him, as he gave him some money the lad took as a matter of right.

‘Isn’t there something called gratitude?’ thought Ramaiah, feeling disregarded. ‘Is he so naive that he knows not civility? Or could he be an outcast, unfamiliar with the niceties of society?’ Ramaiah looked at him intently as though for a clue.

‘Is it possible that his exposure to the elements in his nakedness should’ve robbed his body of its sense of feeling?’ he thought, finding the wretched lad as cool as a cucumber. ‘Now, what he needs most is a piece of cloth to cover himself with. After all, money wouldn’t provide warmth by itself, would it?’

Ramaiah went to his trunk to fetch a vest for the urchin. Seeing him wear it without even looking at him, Ramaiah wondered whether the lad was indifferent to the world in general.

‘Could life get worse than that?’ Ramaiah wondered, as he tried to go back to sleep on his allotted berth. How was he to know that one day, despairing for love, Roopa would personify the wretched side of life itself.