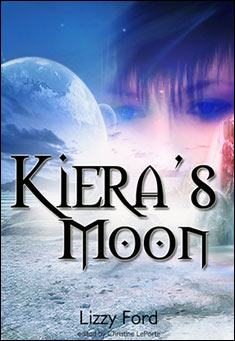 In an attempt to find her a man, Kiera's best friend heaves her halfway across the universe, only the man she's ordained to meet is a warrior, battle-hardened and currently living in exile. A'Ran is calculating and way too cautious to be shocked by life and whatever it throws at him. That is until he is confronted with the challenge of becoming a worthy partner for his life mate.

Kiera settled at an uncomfortable angle, the sandpapery red roofing snagging her polyester disco clothing and preventing her from sliding over the nearby edge of the three-story row house. A warm, late spring breeze held just a dash of chill, which was kept at bay by the internal warmth of the three margaritas she'd downed less than an hour before. Evelyn, her best friend and landlord, shifted beside her before waving a manicured hand at the clear night above them and asking,

"Ever wonder what's out there?"

"Sure. I think everyone does," Kiera answered.

"Do you think people reeeeeeally want to know?"

"That's pretty philosophical for a blonde."

Kiera giggled. The dinner party Evelyn threw to celebrate Kiera's first commissioned piece of art had been a success, as was expected. The bombshell blonde always threw good dinner parties with fun themes; this theme had been Disco Night, complete with lava lamps, disco ball, tacky '70s music that still jammed out the open windows, and costumes for those who chose to wear them. They'd gone shopping at the local Goodwill for their polyester outfits.

"Well, do you?" Evelyn whispered.

Kiera's thoughts, warm and fuzzy after too much of Evelyn's special punch, drifted as she gazed into the quiet night sky.

"Think people really want to know what's out there?"

"Probably not. People don't know what they want, Evelyn, or life wouldn't suck."

"It doesn't really suck," Evelyn sang in such a happy voice that Kiera rolled her eyes.

"Not for you! You haven't been home in, like, three months, and when you're here, it's all Rum-ass this, Rum-ass that," she complained.

"Romas!" Evelyn corrected with another giggle. "Stop calling him that!"

"You're so bitter!" Evelyn's giggle turned into outright laughter.

"Don't laugh at me!" Kiera managed a hurt tone and rolled on her side to frown at her blurry best friend of fifteen years. "Why are you laughing at me?"

Evelyn didn't stop for a full minute. She wiped her eyes and drew a shuddering breath.

"You're so cute, and so funny, Kiera," she sighed, and giggled again.

"Yeah!" Evelyn snorted. "Romas says you're as fierce as a kitten."

"A kitten?" Kiera's tone grew more hurt. "I'm not afraid of him, just because he's twelve feet tall and can bench press me with his toes. It's not nice of him to say that."

"It's nicer than your nickname for him," Evelyn pointed out. "He wants to hook you up with his brother, by the way."

"If he's half as alpha-male as Rum-ass, hell no!" Kiera snapped.

"And why did you dump Brian?"

Kiera was quiet and flopped onto her back.

"Didn't you say he was an indecisive sissy?" Evelyn prodded. "He wasn't a lightweight either. I saw him box."

"I'm not interested," Kiera said. "Men are heartache and more trouble than they're worth. Either they're huge babies you have to take care of, or they want to lock you in their palace with eunuchs."

"Well, you could at least meet them. He has seven brothers. Maybe one of them will fall somewhere in the middle of your man-scale."

"What do you think?" Evelyn prodded again.

"I'm not going on blind dates or being hooked up with hairy alpha males."

"You know, the ones out there." Evelyn tossed a hand toward the dark night sky again.

"I don't know," Kiera answered. "I imagine if there are aliens, they've been discreet for a reason. I don't see any reason to change that."

"You don't want to see other worlds?"

"Other worlds?" she echoed. "I want to explore mine first! I've never been to Europe, or Africa, or anywhere yet. I paint what I think they look like, but I want to see them. I like the sun and sky and ocean-- what is there to say other worlds have those?"

"I guess." Evelyn sounded unusually pensive. "But if it were a world like ours, I imagine it would be okay, right?"

"You mean a kind of other dimension thing, where it's really earth just in a different way?"

"No, a different world completely, but similar in that it has a sun, moon, oceans, grass, and stuff."

"Oh," Kiera murmured. The conversation was almost too serious for her muddled thoughts to follow. She sensed Evelyn's sudden melancholy and tried to focus. "You want to go to another world? Like, with aliens and stuff?"

"It would be neat, don't you think? Hypothetically speaking ..."

"Could you come home when you wanted?" she asked.

"Could you take your cat?"

"Would there be lots of people there with four arms or something freakish?"

Evelyn giggled, then said, "No."

"There'd have to be some sort of difference, wouldn't there?" Kiera's brow furrowed. "If no two people are alike on our planet, how could we be like anything from somewhere else?"

"I bet they'd be ruled by spiders the size of your car," Kiera said with a shudder. "Could you imagine?"

"They don't have spiders," Evelyn said firmly. "And the people are pretty normal. I imagine I'd want to know if I could come home to visit you."

"Yes, that'd be cool. I'll take care of your house while you're gone," Kiera offered. Drowsiness was beginning to take hold of her. She closed her eyes, content.

"And the cat," Evelyn added.

"I'm not sure," Kiera murmured, hovering at the edge of sleep.

"Would you be afraid?"

"Maybe you should stay."

"Probably," she said. "I guess I could visit for a week, if it means so much to you."

Evelyn's happy response was lost as she faded into sleep.

Kiera dreamt of a planet filled with spiders and dinosaurs and awoke in her bed a couple of hours later to the soft sound of her alarm clock going off. She blinked her bleary eyes, unwilling to move for fear of the distant headache intensifying. The lingering images of recliner-size tarantulas from her dream made her shudder and look around self-consciously to make sure none were in her room. The scent of bacon reached her from the kitchen.

Romas was there. Evelyn only cooked when he spent the night, which would also explain how she ended up in her bed. She recalled falling asleep on the roof and knew Evelyn to be too tipsy to carry or drag her down to her room. Romas had tossed her in bed more than once over the past three months, though he had stopped lecturing her on how unbecoming a lush was to a man looking for a wife.

He had some unworldly views on things, she mused. She rolled onto her back and stared at the ceiling, where she had pinned one of her inspiration posters above the bed. This one showed a determined kitty hanging from a tree branch and always made her smile, even when she was hung-over.

"K-K!" Evelyn sang, her voice muffled through the door. "I'm sending in Romas!"

Kiera scowled at the closed door. Romas had no qualms about invading her bedroom to drag her out of bed if Evelyn directed him to. He had no qualms about ordering dinner for her when she went out with them or telling her what to do with her life. He despised her video game playing and art, instead saying she needed a man capable of keeping her feet on the ground long enough for her to focus on doing something real with her life.

The fact that he worshiped the ground Evelyn walked on and took care of her made Kiera jealous. She'd never dated a man half as handsome, annoying, or caring as Romas, and she expected there were very few men like him to go around.

She stumbled up and crossed to her bathroom to brush her teeth before going out to breakfast. One look at her disheveled '70s garb, and she decided to change into pajamas.

When she walked into the kitchen, Evelyn was gazing with adoration up at the huge man, leaning against him in a purely anti-feministic way. Romas was a towering example of male perfection: blond with golden skin and bright blue eyes, a chiseled face and buff body, and tall. Evelyn was six feet tall and Romas a full head taller than her. They made a perfect couple, and Kiera was disgusted at the perfection before her that represented everything she had no hopes of ever attaining.