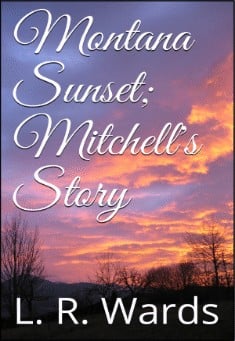 Introducing book two in the Montana Sunset series and Mitchell Wightman, the oldest of the three brothers.

Ever since she could remember, Jesse had been in love with Mitchell and already knew no other man could set alight her most deepest desires, yet he continued to ignore her.

In the small town in Montana where she worked, he and his two younger brothers ran a ranch. Elder brother, Mitchell had been away for years fighting in the war and had recently returned. Jesse realised that her feelings had not changed, but neither had he. obooko.

she had confessed her feelings to him before he went away and he had shunned her. How could she possibly go out to the ranch and face him after that day?

This ebook is also available for purchase in Kindle format.

It was Monday and Jesse felt the nervousness creep in. The odd thing was, she rarely got nervous, but she couldn't help herself. There were very few things that made her that way and lately she'd been feeling a lot of it. She brushed her long blond hair back over her shoulder and picked up her purse off the table beside the door. Every Monday, Wednesday, and sometimes Friday she went out to the Wightman's Copperhead Ranch to do bookwork for them and during those two to three days the nervousness appeared and she knew the reason why.

Although it was just for a month or so for a visit and to help out at the Ranch, she couldn't help the way she felt around him and wished he'd notice her. She'd been in love with him since she could remember and he wouldn't give her the time of day despite her efforts to get noticed. Regardless she was persistent and kept trying. Not in a blatant way, but just subtle enough that a man who was interested would detect the clues. She wasn't going to chase him, no way! It would only get her heartache and Mitch wasn't a man that liked women who chased him. Besides she already had dealt with heartache from him.

So during those few days she worked out at the ranch, she took extra care to wear something nice, put a little makeup on and maybe a hint of perfume in case she saw him. If she saw him. The man was like a ghost. He'd been home for several weeks now and she hadn't seen nor heard from him. It made her think that he was purposely going out of his way to avoid her.

Last Friday when she was out there she made a point of being so bold to ask Jasper, his younger brother, where Mitch was, and if he really was home. Jasper gave her a wry handsome grin a typical trademark of all the Wightman males.

"I think he spent the last three days on the range."

Her eyes widened, "You mean he slept out there?" Did men still do that sort of thing? She thought.

"My goodness Jasper, it's fall!"

"Obviously someone forgot to tell him that." came his reply before he walked away whistling a tune.

She placed her hands on her hips in anger and disbelief. He was avoiding her; she knew he was, wasn't he? That would mean that there was some sort of feeling in that unreadable cowboy, even if it was aversive. She dropped her hands and sighed heavily turning back to the study and her work, sure there was. He'd shunned her years ago. He cared more about the boots on his feet than he did about her beyond a family friend. Even that might be pushing it. She shook her head to dispel the memory and went back to concentrating on work. Keeping that stubborn man out of her head was a task in itself. She was such a lovesick fool!

There was a time when they were all close, but then she went and ruined it by telling him of her crush. To this day she wished she never said anything because she missed his playfulness like a nudge to the shoulder, a hand ruffling her hair or even a friendly greeting for Pete's sake! The other two brothers still treated her as if nothing had changed, but the one she cared about most avoided her. Maybe if he wasn't so handsome she'd be more immune.

That was a lie and she knew it. He was handsome in a rough way, not a male model way that appealed to most women who had that knight in shining armour fantasy. However, Jesse didn't have a fairytale fantasy; she was in love with him because he was intelligent, deeply mysterious and had a quiet strength about him that was intensely attractive. That wasn't to say that he wasn't the type to ride a horse in to a castle and rescue a woman from a dragon, because he was perfectly capable. He was the type of man that could be homely and still attract women because of those qualities. Sometimes she wished it was true so she didn't have any competition because women did find him attractive. More than she liked to admit. She'd known him since she could walk and as far as she was concerned, that gave her first dibs. All of those other women that lusted after him now could just go away.

Even though his hair was in a brush cut now, and she preferred the muss of black hair that the brothers possessed, it still didn't take away from his appeal. He had dimples around that hard sensuous mouth of his too. They were only visible when he grinned, which didn't seem to be often around her, and maybe it was a good thing, because her heart threatened to beat out of her chest when he did.