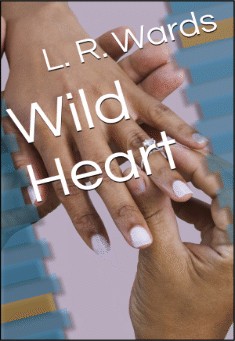 Book 3 in the Wild series.

The youngest and most out of control of three brothers is Colton Hartley. There is a reason for this. The connection is a raven-haired, grey-eyed bombshell that wouldn't give him the time of day. What he does not know is that Elaina possesses secrets that will prevent her from getting close to him.

This ebook is also available for purchase in Kindle USA.

The deep bellow of laughter reached her ears again. It was noisy in the bar but that table was quite rowdy tonight.

"Elaina, that large hunk of a cowboy is in your section again," the slender blonde beside her said while turning around and leaning her elbows and back on the bar so she could appraise him with unrestrained admiration.

"Yeah, he's hard to miss." She said to Leslie, knowing that she was talking about the six foot four inch hunk of muscle that always showed up on the weekend. If it wasn't his height that got your attention, it was his boyish looks adorned with a masculine dimpled smile, and dark blonde hair. Then there was his charm. Charm that didn't work on Elaina. She had built up an immunity over it, at least that's what she kept telling herself. Anyway it was more than likely he was there to aggravate her. She tossed a quick look over her shoulder at the rowdy group of men. Her eyes followed the same downward movement Leslie's did, but it was brisker and no emotion showed on her face while she did it.

Leslie was the other barmaid she usually worked with. She was new to town so Elaina didn't quite know what to make of her yet. "How I would love a piece of that." The other woman said enunciating every word slowly while guiding her eyes over his large muscular form.

"Get in line." She mumbled, but wasn't heard. Leslie was still involved with ogling Colton Hartley.

"I wonder if he's single." She grinned, "Not that it would stop me."

Elaina looked back at Leslie and stopped herself from rolling her eyes. Not at Leslie herself, but the situation all together. It didn't surprise her how she reacted to that particular customer, all women did. However, unlike herself, Leslie was new and didn't know about Colt's reputation with women, "Very." She said knowing where this was going.

"That's good news." Leslie said focusing on the handsome cowboy again. "Look how he bulges in all the right places." She licked her lips while moving her eyes down to the area of his jeans that indicated his gender, "Lord help me, does he ever."

Oh, yuck, she thought to herself wishing some people would just keep their thoughts to themselves. "He's always single. I'm warning you Leslie, he's not into commitments."


"I don't care." She said winking and tossing her shoulder length blonde hair flirtatiously while turning toward her, "Let me take their order to them. Please." She fluttered her lashes flirtatiously.

"It's all yours." Elaina said pushing her tray full of drinks toward her gratefully. She'd already been there half a dozen times and every time it was the same thing. Colt tried to talk to her, and the one named Darcy tried to grab her bottom. She'd been able to evade both of them. She was pleasant as usual because she had to be for her job but she wasn't going to fall all over herself like all the other women in here, including the four at the table that suddenly appeared as soon as Colton entered the building.

"I'll owe you." She said taking the tray and with an exaggerated sway of her hips headed toward the table. Leslie was nice to her so she tried not to judge her. She wore clothes that were way too tight, but it did bring in tips. Also her hair was bleached blonde, when she knew with her green eyes it would be nicer if she stayed a brunette which was indicated by the roots. Elaina on the other hand still made more tips than her even though she didn't dress like Leslie.

Tonight she wore a knee length black skirt and pink blouse. Her ebony hair was pulled back in a pony tail which she purposely did so when some drunk cowboy spilled his drink on her, it wouldn't get sticky. Washing stale beer out of your hair wasn't a pleasant task neither was working with it all night. She'd done it more than once over the past six months since she started working here.

Leslie on the other hand, wore a tight white tank top and short denim skirt. She was slender so it sort of suited her, but Elaina could never bring herself to dress like that. She needed the tips too, but she had a sense of pride.

Elaina shook her head seeing Leslie bend over in front of Colt and display her already too revealing chest through her low cut top while she set the drinks on the table. He was interested as usual. It never ceased to amaze her why women went out of their way to impress men like Colton Hartley. He was such a rounder. She knew firsthand what he was capable of.

"You okay baby?" The bartender asked seeing her frown.

She pasted a false smile on her face and shook her head, "Fine Lenny, I'm just tired is all." She wanted to ask him not to call her that pet name. It felt too intimate to her, and as far as she was concerned her boss didn't know her on that level, but he seemed to use it more and more lately. She began to wonder if he was attracted to her in some way. That was too bad really, because she wasn't interested in him. He was nice, and not homely or anything, but she really wasn't interested in a relationship at this point in her life.

He nodded toward the group that Leslie was still flirting with, "She seems to have settled in well."

Maybe too well. She thought to herself. Again she chastised herself for being judgmental. It wasn't too long ago that she was that person trying to impress a good looking charismatic man, but never again. "We have a lot of friendly folks around here." She answered absently.

He studied her expression for a few seconds before he spoke again. "Well as long as Colton doesn't wreck the bar again, I don't care what she does as long as it keeps the orders coming." He said shaking his head, "That man is as volatile as hell when he drinks and gets riled."

That was true, even though she didn't say it out loud. She took her order and left.