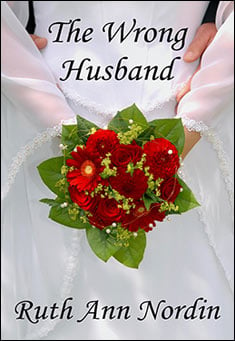 Deep trouble that's what Owen Russell is in. In order to save his aunt from poverty due to his uncle's bad gambling debts, he wins back all of the money from the gamblers and returns it to her. Conscious of the fact that they now want to killhim, Owen takes flight from Louisiana to Nebraska where he encounters the sheriff, who mistakes him for Irving Spencer who recently signed up to be his deputy.

Owen decides that this is far better than being killed. Wanted posters appear all over town seeking his arrest. Of course he decides to play along and pretend to be Irving the expected deputy. What he doesn't appreciate is that Irving had agreed to marry local girl, Jenny Larson. He marries her, but then guess who shows up? The real Irving Spencer!

-The courthouse is right up ahead.

Owen dug his heels into the dirt, but the sheriff lifted him by the shoulders and dragged him along, making him stumble a couple of steps before he found his footing and walked with him.

-What a joyous day this will be! Now Jenny can rest assured that her little boy will be safe.

-Little boy? She has a child?

-Don't act so surprised. That's why you two are getting married.

They stopped in front of the imposing building and the older man set his hands on Owen's shoulders. -Now, I know you've never been a family man before, but you're about to become one. I feel responsible for you, what with you being so young and all, but I know your ma raised you right. You'll do right by Jenny and Jeremy. They need you.

-Oh, here she comes. She's the one in the pretty white dress. She even sewed it herself.

Owen grabbed the sheriff's vest. -You don't understand. I can't marry her! It was bad enough he stole Irving's clothes and money. He didn't need to add this to his list of sins.

Meyer chuckled and shook his head. -The jokes just never stop with you, do they? Look behind you.

He reluctantly obeyed and straightened as soon as he saw her. Whoa! She was...She was...He rubbed his eyes and looked again, just in case they were playing tricks on him. But they weren't. She was the most beautiful woman he'd ever seen. He blinked several times. She was still there...and looking very appealing.

"I said I'm here to see my son, Clyde Jenkins said, standing firm in the doorway.

Jenny Larson tried to slam the door on his face, but he stopped her by putting his foot out so she couldn't shut it. Her heart hammered in her ears. No. He couldn't. He wouldn't! She pressed on the door with all of her weight but it wouldn't budge.

-You didn't want to have anything to do with him when you found out I was expecting. Why are you interested now? she finally snapped.

-He's my son. He shoved the door open and stormed past her.

She ran after him as he strode down the hallway of the boarding house. -You can't do this!

He ignored her and opened the kitchen door.

-Get out of here! Jenny demanded.

-You can't keep me from him, Jen, he said as he paced toward the four-year-old boy who stopped eating his soup.

Jenny shot Mrs. Jones an apologetic look as she raced to the small round kitchen table and put her hands protectively on her son's shoulders. -You're not taking him, Clyde. I won't let you!

Jeremy looked at Clyde but didn't say anything.

Smiling at the boy, Clyde knelt in front of him. -Good morning, Jeremy. I'm your pa.

Jenny's gaze shifted from Clyde to Mrs. Jones who set down the stack of newspapers and gave her a questioning look. Jenny silently pleaded with her landlady to help her. Turning back to Clyde, she said, -You can't do this.

His cold brown eyes met hers. -Jen, I believe I have a right to my own flesh and blood. He pulled out a chair and sat on it so he could be eye level with the boy. -Now, Jeremy, I hope your ma told you something about me.

Jeremy looked up at her. -Is he my pa?

Taking a deep breath, she debated how to answer his question. All Clyde did was make it possible for her to conceive the child. She hardly considered him a real father. Who would have thought five minutes could change everything?

-Yes. The confirmation tore at her heart. She knew the day might come when she'd have to reveal the truth of his lineage but hoped it would be when he was older, when he could fully understand the situation.

Clyde shook his head at her. -You didn't mention me at all?

She gritted her teeth. -You weren't around.

He smiled at Jeremy. -Your pa had some important business to do. I'm done now, and you and your ma will come with me to St. Louis.

-We will not! Out of the corner of her eye, she watched as Mrs. Jones quietly left the room. Her grip on Jeremy's shoulders tightened.

-Our home is here. We're not leaving, and we're certainly not leaving with you.

-You didn't think so five years ago.

-And I was wrong. He attempted to rest his hand on hers, but she pulled away from him as if his touch burned her.

-People make mistakes, and I made a horrible one. I intend to be a part of your life.

-No! Scared, she grabbed Jeremy from his chair and picked him up. Holding him close to her, she rushed toward the kitchen door.

Clyde blocked her exit. -You're not going anywhere.

He's my son and I have every right to talk to him.

Despite her shaky hands, she refused to back down. -You gave up those rights when you abandoned us.

He threw his hands up in the air. -I had to get settled. I didn't have the money to support you and a child.

-You hopped on the first train out of here. You said it was my fault I got in the family way. You even said someone else could be his father.

Shrugging, he stepped toward them. -How could I tell that you weren't sleeping around with other men?

Indignation swept through her. How dare he! Could he easily forget that he took her virginity? Used goods. That's all I am and that's all I'll ever be. However, it wasn't time for regrets. She had to protect her son.

-I know Jeremy is mine. He took another step closer to her. -I want to do right by you and him.