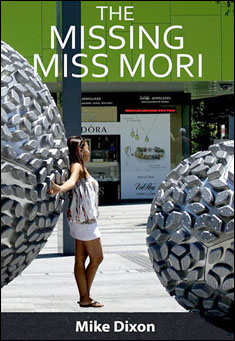 Every year, millions of young women travel overseas and some never return. They join the lists of missing persons on police data bases. When Yuki Mori's sister went missing in Australia she went to look for her. With the help of a private detective, Yuki traced her sister's movements to a mysterious part of the big country and entered the frightening world into which her sister had vanished.

5 November 2002, Fukuoka City, Kyushu, Japan: Yuki Mori jogged through the park. She wore running shorts and a T-shirt emblazoned with the name of her kendo club. A sweatband secured her long black hair and beads of perspiration ran down her bronzed limbs. At a point where the path passed between two lakes, she caught sight of a familiar figure. Her flatmate, Natsumi, was a short way ahead. She quickened her pace and caught her up. The other girl was a natural runner, tall and long-legged. Yuki was shorter and more stockily built, better at surfing and skiing. Natsumi turned to speak.

'I'm finished. Is there anything I can get on the way home?'

'You could clear the mailbox,' Yuki said. 'My sister still hasn't written. It's five weeks now.'

'I'll get the mail.' Natsumi lengthened her stride. 'Stop worrying. Tomoko is twenty-one. She's old enough to look after herself.'

The shower was running when Yuki got back to the flat. There was a box of sushi on the table and an envelope with Australian stamps. Her immediate reaction was one of relief but it was short-lived. There was something worrying about the way the envelope was addressed. The writing sprawled from side to side and was a confused mixture of Japanese and English. It was a credit to the postal system that the letter had reached its destination.

Scraps of yellow paper fell out when she opened the envelope. They looked as if they had been torn from a cheap exercise book. Yuki did her best to arrange them in order. Tomoko was now writing entirely in English. As far as she could make out, her sister was having an awesome time in her hippy commune, her religious instructor was cool and she was into transcendental meditation.

Yuki had no trouble with such terms. As a teenager she had attended schools in America and England and knew the language well. Other terms were more difficult to understand. One was Immaculate Conception. She found immaculate in the dictionary. It had something to do with dressing neatly and conception referred to sex. Put together they didn't make sense. Nor did Ommda'on and Shiboleth. Tomoko had used them in previous letters and they weren't in any dictionary. She could only conclude that they were crap terms and her sister was being taken in by crap artists.

She was about to throw the envelope away when she realised there was still something inside. A card fitted so snugly it hadn't fallen out. She removed it and her heart missed a beat. Tomoko had included a photograph of herself in circumstances that were scarcely believable. Her kid sister was lying with two men and a naked child. The men were dressed in dirty sarongs and Tomoko was bare breasted. She held the naked child between her outspread legs as if giving birth. Yuki didn't know what to think. Tears formed and she sobbed loudly.

Natsumi hurried from the shower.

'Whatever is the matter?'

Yuki pushed the photograph towards her.

Natsumi couldn't either. She had met Yuki's little sister and remembered her as a delicate, sensitive girl who was a gifted musician. Tomoko had stayed with them for a few days and they'd gone for a drive in the country. The highlight was a visit to a hot spring but Tomoko had remained in the car. It wasn't as if it was mixed bathing. There were separate pools for men and women but Tomoko was too shy to undress and get into the pool with the other girls. Now she was appearing naked, or almost naked, with two much older men.

Natsumi dripped water on the print as she took a closer look. The men weren't just older they were repulsive. But that was only part of it. They were lolling obscenely against a stone pillar carved to represent a giant penis.

'She's been drugged,' Yuki sobbed. 'Just look at her face. They've drugged her and they're doing what they like to her. It's awful. I feel so helpless. I don't know what to do.'

'Shouldn't you go to the police?'

'No.' Yuki reached for a box of tissues. 'Even if it was here in Japan there would be no point. You need evidence before they'll do anything. It's not an offence to join a religious cult.'

'It's got to be the same. I've made inquiries. Hundreds of thousands of young people go there on backpacker holidays every year. The police aren't going to start an investigation just because someone's worried about a relative in a hippy commune.'

'But the police are meant to stop bad things happening.'

'Natsumi.' Yuki glared at her. 'I know the police. I've worked with them in Nagoya, coaching problem kids in athletics. I know what the police can do and I know what they can't do. They don't stop things happening ... they go in after it's happened.'

'It's not just Nagoya,' Yuki screamed. 'It's everywhere. They don't have the resources. They can't be everywhere at once.'

Natsumi tried to comfort her. 'Have you spoken to your uncle? He's a very important man. He should know what to do.'

Yuki looked up tearfully. 'My uncle is over ninety. He's ill. He's in an old people's home.'

'But he might know someone you can talk to.'

'I don't want to worry him,' Yuki sobbed. 'He's old. He's just had a stroke. She covered her face and ran into her room.

Sleep came slowly. Yuki lay on her back and tried to make sense of what had happened. The idea of Tomoko entering a hippy commune was totally absurd. Her sister was obsessed with her musical career. When she wasn't giving performances, she was practising at the piano.

Tomoko had an aversion to discos, karaoke bars and pop concerts. Her views on sex were puritanical. Yet she had been photographed in a highly suggestive pose with two revolting men and she'd included the photograph in a letter.

In the photograph, Tomoko and her male companions were playing out a sex scene or something like that. Her sister was in the birth position with the naked child between her thighs. The two men were curled up beside the stone phallus as if to represent testicles.

Yuki had torn up the photograph and thrown the pieces into the wastepaper basket together with the envelope. She got out of bed and switched on the light. The envelope was still in one piece but scrunched up. She straightened it out and examined the postmark.

The letter had been posted in Cairns and had taken two weeks to arrive. Yuki didn't need an atlas to know that Cairns was a tourist destination near the Great Barrier Reef. She retrieved the pieces of the photograph and stuck them back together.

The scene looked tropical. Palm trees and a blue sky. That checked with the postmark. Cairns was in Australia's far north. Nothing else checked. The setting was a rural slum. Tomoko and the men were dressed in sarongs. Tomoko's sarong was clean. The men's were filthy and the child was covered in sores. In contrast, the stone pillar was pearly white. It wasn't overtly phallic but it didn't take much imagination to see it as an erect penis.

Yuki went to her desk and found a magnifying glass. The stone was covered in carvings. She turned on a reading lamp and placed the photograph beneath it. Under magnification, Hindu deities, Buddha figures, crucifixes and other religious symbols appeared. She had a strange feeling that she had seen them before. The stone stirred memories of childhood picnics in the woods.

She'd had an unusual upbringing. Other kids had mums and dads as well as grandparents who often lived with them in the same big house. She and Tomoko had lived in a small cottage with Auntie. It had been a happy childhood but not a conventional one. She remembered services at the local church. There was nothing odd about going to church. Christianity had a long history in Kyushu but people who went to church didn't visit Buddhist shrines and have Hindu statues in their garden.

Auntie's garden had all sorts of statues. Yuki remembered an elephant with lots of arms. It stood between a statue of the Virgin Mary and a prayer wheel. She tried to recall the elephant god's name but without success. It belonged to the distant past. She switched off the light and went back to bed.

Sleep came swiftly but not soundly. Dreams invaded her mind, jumbled and disconnected. One moment she was playing in the garden. The next she was walking in the woods, looking for something. She was small and Tomoko was just a baby. They were living on the mountain with Auntie and their cats.

Auntie held Yuki's hand and carried Tomoko on her back in the way farming women used to carry their babies. They put flowers on their mother's grave and visited a shrine. The dream returned to the shrine. It had statues like those in their garden. In winter they lit candles and joss sticks. In spring they made garlands of wild flowers and hung them on a big stone. The stone was pearly white and covered in carvings. Yuki knew she had found what she was searching for. She stopped dreaming and fell into a deep sleep.