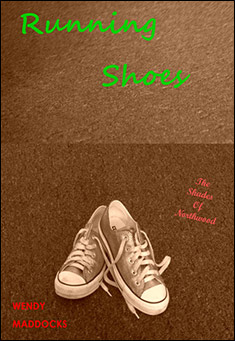 The Shades of Northwood, book 1.

She used to run in order to win. Moving away from home to commence a new life at college life is never going to be easy. It's all so shiny and new, and extremely scary. Well, it is for Katie. She was trapped somewhere between the girl people expected her to be and the future she imagines for herself. What's more, Katie discovers the town she ran to is not all that great after all. In fact, it's quite dead. Now she runs to live.

"Giving birth to you was definitely easier than this... and that took 24 hours."

"It's okay," Katie grinned. She held the lid of one box down while her mother suffocated it with parcel tape. "I'm shattered too." There were piles of boxes filling her bedroom. She stood up and put her hands to her aching lower back. "My back's killing me. Must be my age catching up with me."

Katie stretched out a hand and pulled her mother up. They put the box on one of the piles and sat down on her bed.

They had both been huddled in this room for the entire weekend bboxing up Katie's entire life so far. 16 and a half years. A handful of clothes were still somewhere in the washing cycle but everything else was neatly packed away in the boxes had finished and randomly thrown into the ones she had done. But everything had been labelled -books - papers - makeup and hair - computer stuff. Both of them looked around without a word. Almost everything was packed away now but Katie had a feeling she would be working into the night unravelling her jumble of jewellery and ironing those last few clothes. Also, there was a final check to make sure she hadn't left anything important behind.

"I can't believe how much junk I had." Three or four black bags peeked around the poster covered door. "And I never even knew I had half of it."

"We always made you tidy your room but I guess we never made sure you actually threw anything out."

Katie rolled her eyes and let herself fall back on the bed. It was quite late in the evening and it was all she could do not to just curl up and close her eyes. The alarm had gone off at eight this morning although, after spending the day in this stuffy, little room and in the sticky heat of high summer, the day felt like it had been much longer. The windows had been open all day and a fan had been whirring away on full. But Katie had no intention of complaining - The oh-so-predictable British weather would likely be raining again by the end of the week.

"Tea's ready!" a voice shouted up the stairs. "Well, in about ten minutes."

"Thanks Dad!" Hunger had started biting at Katie as soon as tea was mentioned. "No more Dad making tea at the weekend."

"We'll visit when you tell us you're settled. We can make your tea then."

"I'm going to have to learn how to cook." Katie jumped off her bed and tore through the open book boxes by the window. "I don't know how to cook. What am I going to eat?"

"Katie, love. You've been helping me cook since you started school. I don't think you'll starve." The older woman got up too and left the room. A door down the hall squeaked.

A setting sun washed the room in an orangey haze. The moon was already shining brightly, just waiting for the sun to go down so it could be the best thing about the night. Katie stood at the window and looked straight in front. If she angled her head up just the right amount, the houses opposite looked like they were miles away rather than just across the road and the park across the road filled her view. Never again would she have this view. Not that she would miss it that much now that a car park had cut through half of it. But still... it was the park she ran through every day and where Dad had taught her to ride a bike. With a sigh, Katie closed the window and grabbed her pumps.

A hand brandished a cookbook under her nose. A student cookbook that looked like it had never been opened.

Katie left her laces undone as she took the book and flicked through it. Half of it was simple food involving pasta, sausage or some kind of casserole. Some were five minute recipes and a handful were desserts or dinner party food. "Thanks Mom." She hugged her mother.

"Stop that or you'll make me cry."

Katie took the book and dropped into a box and taped it shut with a half-laugh. "I'll put the fire station on standby when I get there."

"Do your laces before you break your neck and then we can't rent your room out."

Katie tied her pumps with fingers so practised she did not need to watch herself then followed the other woman down the bare, wooden stairs. Dad was still banging around in the kitchen so they sat at the table and watched him make a mess. Tea on Sunday was only sandwiches and maybe a slice of quiche but today Dad was making an effort. Sandwiches had been replaced by rolls, quiche by pizza and he had bought a cake too.

"Dan!" Katie shouted. Her little sister came running in and plopped down in the seat next to her. "What are you wearing?" It used to be a yellow sun dress but Dan liked to play in the mud so it was now a mostly brown smock. "Dad, Mom, you didn't need to do this. We went out last night so I'm all partied out."

"This isn't a party 'cos there aren't any people."

"This is an indoor party."

"Still, I'd rather just have a last normal, family night tonight."

"Oh, honey, we just couldn't help but give you a tiny celebration. A last night just doing ordinary things wouldn't have been very special."

"I know. It just makes it harder." Katie glared at her sister who was trying to steal the mushrooms off her pizza slice. "Dan, pack it in." The younger girl shrank away from her and Katie was just as surprised as her sister when they both started hugging each other. "It takes me moving out to realise I quite like you, titch. Usually."

Their parents looked at each other. The two girls did love each other, they could see that, but not even a Nazi interrogation would otherwise get them to admit it. Their father opened the cupboard under the sink and brought out a case of fizzy pop. He opened the case and passed cans out. Katie broke hers open and drained half of it in one go. "So, when me and Mom were dying of thirst up there you never thought to bring these up. Nice."

He nodded at the basket of clothes in the corner - some crumpled and some freshly ironed.

"Cool. Sleep for me tonight."

"Katie?" Dan asked. "When you go away will it be forever?"

by D.K. Hansen Corruption. Greed. Murder. The road to hell is paved with good intentions, and even the wisest man’s obsession can......

by Candy Ray This is a collection of quirky and surreal short stories and flash fiction. They are set in the future, or in a less com......