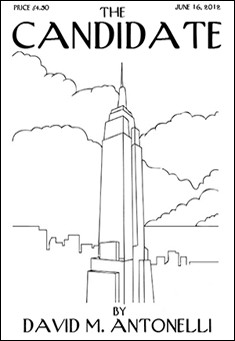 The Candidate
By David M. Antonelli

The Candidate is a surreal comedy about a man obsessed with success at all costs who bluffs his way through academia on his way to an eventual assault on the White House.

It opens when a young aspiring academic con man (referred to throughout the novel simply as “The Candidate” for comic effect) dazzles at an interview for a professorship and subsequently appoints himself after he brazenly assumes he got the job and the bungling professoriate are all afraid to admit they missed the appointment meeting that never occurred. He rapidly rises through the ranks using his charm and a variety of bluffs and scams until he becomes president of the university and is eventually convinced by his supporters to take a run at the White House.

The novel reaches a climax at the presidential debate in which The Candidate is dressed as an aboriginal tribal chief to secure the minority vote in a battle against Bill Clinton - going for an unprecedented third term - and a Republican candidate whose entire campaign platform is based on the legalization of drinking and driving.

With a huge cast of bizarre and hilarious characters The Candidate is guaranteed to entertain, while also casting a critical mirror to the increasingly circus-like atmosphere of the post-Trump US political landscape.

The Candidate walked into the conference room and wiped a lone bead of sweat off his gleaming white forehead.  He smiled and adjusted his wafer-thin gold watch, making sure it stood out against the background of his white suit and black bow tie.  The appointment committee looked on in awe.  They’d never seen such a demonstration of pure magnificence parcelled in a single entity.  His shoulders were broad and sharp, chiselled to perfection like pieces from the Elgin Marbles.  His torso was cut with the precision of an Antwerp diamond and his head towered upwards from his mighty figure like the central column of a great art deco palace.  Crowned by a laurel of golden hair groomed and sculpted in the style of a prize-winning poodle, he was the very image of classical beauty.  The odour of something sweet and profound - a new Hellenism? - wafted through the room.  He looked with humble deference at the five professors seated at a large table in front of him.

“It says on your resume that you were a rower,” said Benson.

“Sorry?”  The Candidate tilted his head in confusion.  “A mower, sir?

“Look, do you even know what a paddle is?” Hedges snarled.  He wore thin round glasses that looked like they’d been assembled from pieces of an antique telescope.  He was the most distinguished scientist on the panel, acting as chair of at least a dozen international committees.

“Yes.  Something you spank babies with.”  The Candidate shifted nervously in his suit and adjusted the knot of his tie.  He once read a test report in The Economist that proved that a man could land an office job from a distance of up to two hundred meters on the strength of a well-constructed Windsor knot alone.

“I think oar was the word you were looking for,” said Gables as he fumbled through a leather-bound copy of The Iliad.  “Interesting etymology.  Celtic, I think.”

“Thank you Mr. Joyce,” Hedges snapped.  He turned to The Candidate.  “As you can see we have some vintage literati on staff.”

“Christ, man,” said Benson.  “If you spanked a baby with an oar these days the dyke squad would be on your ass in no time for child abuse.”

Benson was a wilting travesty of a man, once hailed by his young admirers as a new Don Juan only smarter than the first, spun off years of white tequila midnights and simpering undergraduates eager for something more - life experience - than the standard degree had to offer.  He hadn’t published a paper in ten years and was nowhere near retirement.  Students held him up in curious reverence as an emblem of the free love generation gone bad – a kind of Dorian Gray of the Haight Ashbury scene.  Thrown out of the sixties as if from the back of a garbage truck, he wore orange bell-bottoms and platform shoes and drove around in a van with bubble windows painted with images of naked women decapitating twelve-headed dragons.  He was living proof that there was still hope for a twenty-year-old in the dreary post-Regan modern world – “no matter what happens to me I’ll never end up as bad as him,” they would all think as they listened attentively to his physics lectures laced with halcyon tales of group sex in see-through neoprene tents pitched in the back alleys between Castro and Mission.

Benson stared across the table at Hedges, who was cleaning out his pipe with the sleeve of his oak-brown cardigan.

“Why do you want this job?” Hedges asked, smiling like a man who had just forced checkmate.

“Excellence,” replied The Candidate.  He wiped his nose on his sleeve.  “Excellence, sir.  I’ve always striven for perfection in all areas of life.  Western Polytechnic has always been a world leader in this category.”

Hedges was visibly flattered and looked over at Benson, who was braiding a portion of his hair into some kind of miscarriaged dreadlock.  Benson looked up and gave him the nod.

by Roger Himes As a lawyer in private practice for many years, I discovered that law and justice and truth weren't all the same thi......

The Birth of Tippy Gnu

by Tippy Gnu I believe autobiographies include too much information, so I’ve made mine very abbreviated. I see no need to inclu......