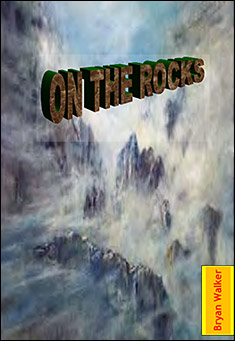 I fell from a rock and landed on a narrow shelf breaking my leg in four places. A tropical storm was threatening to wash me into a boiling sea. Throughout a long night I lost conscientiousness several times with the pain. This actually happened: the names of people and places are real; the photographs were downloaded from Google Images.

This was written at the beginning of my convalescence immediately following surgical repair required by my accident. I wanted to recall as far as possible my thoughts and actions during my time on the rocks. Such catharsis aided my recovery.

This extremely painful experience had a surprising and happy ending!

I had climbed on to a favourite rocky ledge at Unawatuna to watch the sunset almost every time I visited that beautiful Sri Lankan bay during the last two and a half years.  The sunset was always a delight, always different, always glorious.  Two nights ago it was the best that I had ever seen with a rich green area behind a golden yellow lattice.  Elsewhere the sky was a riot of blues, pinks and aquamarine set on fast moving fluffy clouds with more solid clouds nearer to the sun.  Once the sun touches the horizon it takes just over two and a half minutes to disappear.  By the time you leave the rocks the bay is almost dark and ribbons of white breakers are flecked with the reflections of lights from the background of distant cars and houses.  To the north the Galle lighthouse flashes across the sea that is so wild at this time of the year because of the south-west monsoon.  The massive breakers smash against the rocks sending up great walls of spray.  The wind snatches these in a random way; sunset watchers may be shocked out of their reflections by a surprise soaking.

Life can take curious twists sometimes so dramatic that the ‘living daylights’ can almost be snatched from the living.  It was so on Monday 2 October at 18.00 hours.  After a convivial afternoon on the beach with my older son Adi and his partner, Agnes, my other son Richard, Drew (from Australia) and Michelle (from France) I paddled my way along the water’s edge and up the steps beside the temple.  The sea was rougher than usual and the clouds looked foreboding.  Maybe the sunset will not match its usual standard today.  To the right I could see Adi and Agnes with their arms around each other while watching the skyline.  Not wanting to disturb them I turned left as usual.  Only two other people were in the area.  I had to pass one in my clamber over the rocky splash zone at the end of the bay and I apologised for disturbing his solitude as I scrambled past.  The noise of the wind and waves was loud in my ears and my lips tasted salty.

The rocks here are black and unfriendly with rough surfaces.  They were warm in temperature but they are not warm in colour like some.  After nearly three years my feet had become hard and without footwear I could easily manage the climb along the familiar route.  The last boulder is at shoulder height and needs careful negotiation as it protrudes beyond the foothold; you have to cling to it closely in order to keep your balance.  Only two nights ago I came here with Vasuki, and her friends Allison and Thushan; she said it was dangerous and made me stay on the much larger shelf at the side.  Now, without her restraining influence, I can reach my usual objective.  Spreading my arms widely to maintain as much contact as possible with the protruding surface I got my first toe hold.  Somehow my second foot failed to grip the ledge.  And I slipped.

Some have said that drowning people have their whole life pass before them.  This was not now my experience.  My mind was intensely in the present and I was sharply aware of every single inch of the six metres through which I fell.  My arms and legs were severely torn; I banged my head and bruised my ribs.  Clutching in panic with my right hand, slued my body anti clockwise through 90 degrees as I continued my fall.  Normally I wear my wristwatch on the inside of my wrist.  My father taught me to do that when I was given my first watch as a 10th birthday present - this stops the winder catching on trouser pockets.  For climbing I had twisted the watch to the other side of my wrist to protect its face.  The relief of doing this flashed through my mind as my fall continued although the watch only cost me about £5.00 in India last year.  But I was still glad of my forethought.

by Armido Cremaschi 2020 will forever remain in the collective memory as the tragic year of Covid-19 pandemic. For those who died for the......

by Iain M. MacLeod Also available as an Audiobook A memoir of my life as a disabled wheelchair user and my sheer determination to overco......