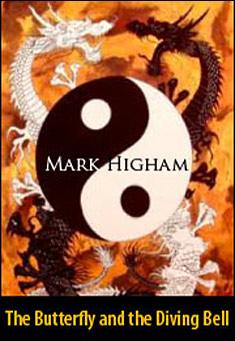 The Butterfly and the Diving Bell
By Mark Higham

This is a book which expresses a life philosophy written as an entirely improvisational style not unlike automatic writing of the 19th century. I plugged into a spiritual force Tai Chi masters use (as I am one) to channel chi which is the mystical will of the universe discovered first by the Chinese and is an act of a wounding by God that makes us remember things, remember who we are. Happy reading. Cheers!

The hunchback is ringing his bells. His fair maiden is on the cusp of death, and he is almost foolhardy in his unctuous desires to pour the heated oil on his tormentors below.

The hunchback might be unready for the challenges of being fully human wanting instead to be made of stone, but what he may not fully realize is that any human action or any action by anything at all fails to persuade the gods that be to gently lower their splayed and splaying fingers upon the boiling men and the soon-to-be-rescued maiden Midas touching blessings upon the heads of the unconsoled.

The terror of living is the iris eye of the defenders and offenders shrinking reality down into a brain related meltdown. Is it our biological selves that blind us? Is it the awful burden of embodiment that oppresses us? Perhaps these are questions better left to a proper theory. But theories ultimately fold down on themselves as there is a certain uselessness to truth.

Jean Beuadrillard commented on the ultimate uselessness of theory making when he came to the conclusion, after a short argument, that almost every genre of fiction was imploding and that literary criticism itself was short circuiting under the deluge of a word imprisonment, meaning that the whole literary universe was on the verge of complete and total obsolescence event. Theory and fiction get united, and in their oneness, collide with sense making in an almost beautiful failure gone to this point unnoticed in the hardheadedness of the cognoscenti who can’t give up on rationality.

The whole idea of having a reason for something lies in the brilliance, almost porcelain delicacy, of a gossamer string of reasons webbing across a universe of a kind of linear unfolding. Reasons, we scream. Give us a f—ing reason. A reason to live. A reason to keep ourselves from the abyss of the seppuku that is the operative reality of our death/life resonance. And  it is this resonance, in its soundless sound, placing interstitial voids in the spaces between words, words we have to have boundaries around in order to have anything like a language at all. It is the words that drive us. But the lack of recognition that sense making always fails precisely when we have captured a phoneme in our net with a nagging voice, soundlessly soundlessly letting us know that not only are we on the wrong track, but the people who have it right, namely the Zen masters, use their response of silence like a weapon cracking open the skulls of their students to let the light, the enlightening light flow into their heads that are actually supposed to already realize the illusory nature of everything.

Even when we track the Buddha’s path from hedonism to sage hood, we have to put a pause on his hurried journey when he emaciated his body in the interest of spiritual renewal. Somehow, as the Bhodi tree worked its healing magic upon the tired and perhaps a little confused soul of our beloved Guatama, who, with kaleidoscope eyes, experienced the tempter’s wiles, Maya, the god of illusion, the god of making desire into a thing impeccably irresistible. But illusions are illusions, and in placing the word “are” in this position we are untangling the incipience of an argument on beingness every time we resort to using a verb of being. Language absolutely hinges on being: am, is, are, was, were, be; and we are told by our noble experts that if we use verbs of being too much, then we are making a syntactical error whose rules we’re made to follow actually do more harm to sense making without the realization of our scanning of the implantation of the ambiguous, if we don’t embrace, will lock us in logic and throw away the key forever. Michel Foucault writes about the implantation of the perverse, meaning that society, in its thirst for building power discourses, wants so desperately to suppress normal bodily impulses in what turns out to be the creation of a voluble space. Instead of the wanted suppression, we have a situation where the suppressing power discourses quixotically open and we have a society of speakers wanting to share every single perversion they have, even as they implant these confessions in memoirs, on reality TV shows, and any other media outlet willing to lend an ear.

by Tippy Gnu If you're happy, but want more happiness, you're not greedy. You're a unicorn chaser. I use unicorns to symb......

by Dada Bhagwan “Aptavani 9” is the ninth in a series of spiritual books titled “Aptavani”. In this series, Gnan......