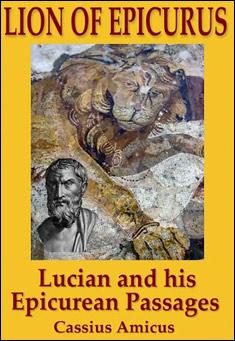 Free book: Lion of Epicurus: Lucian and His Epicurean Passages
By Cassius Amicus

The philosophy of Epicurus is the theme of Lion of Epicurus, Lucian and his Epicurean Passages. These selections from the Second Century AD illuminate the ideas and attitudes of the early Epicureans and are delightful reading for anyone interested basic philosophical and religious issues as they apply to everyday life.

Lucian of Samosata lived from about 125 AD to 180 AD, and during that time he traveled throughout the Greek and Roman world, producing a body of commentary of such wit and insight that his fame has lasted for almost two thousand years.  Although Lucian’s reputation is well known today, he is generally considered a “skeptic” whose trademark was wholly satire and other negative commentary.  Such a view holds that Lucian offered little if anything that was positive in the place of the hypocrisy he criticized.

It is one point of this book to assert that this view is false:  Lucian is viewed today purely as critic because the unifying thread of his criticisms is very difficult for the modern reader to identify.  This difficulty in turn stems from the fact that the pattern of thought which unifies Lucian’s work has been the target of two thousand years of misrepresentation, which has succeeded so well that his point of view can hardly be recognized today.   As the works included here will illustrate, that point of view – that unifying thread – that pattern of thought – is Epicureanism.

In contrast to the body of work of another famous ancient writer, Lucretius, whose entire literary output seems to have been devoted to the promotion of Epicureanism, history has preserved a wide variety of Lucian’s works on subjects other than philosophy and religion.  In part because he trained his satirical skills on so many different subjects, it is an easy error to consider Lucian as a professional skeptic who was equally cynical on every topic.

But this is not so – Lucian was not equally cynical about every topic.  In order to see this, however, we must first arm ourselves with a basic knowledge of competing views of the time, and of a school that has almost been lost to history.  Only then can we see that there is one school, and one philosopher, whose arguments Lucian adopts and whose founder Lucian praises; the school of Epicurus.

Throughout Lucian’s work, the classic enemies of the Epicureans – the Platonists, the Stoics, the Academics, and others – are the prime targets of his biting words.  But Epicurus himself is never treated with less than courtesy, and rarely if ever is a later Epicurean a target of derision.

In general, Lucian refers to Epicurus in tones that can only be described as reverential, such in the following passage from Alexander the Oracle-Monger:

In this connection Alexander once made himself supremely ridiculous. Coming across Epicurus's Accepted Maxims, the most admirable of his books, as you know, with its terse presentment of his wise conclusions, he brought it into the middle of the market-place, there burned it on a fig-wood fire for the sins of its author, and cast its ashes into the sea.  He issued an oracle on the occasion:  “The dotard's maxims to the flames be given.”

The fellow had no conception of the blessings conferred by that book upon its readers, of the peace, tranquillity, and independence of mind it produces, of the protection it gives against terrors, phantoms, and marvels, vain hopes and inordinate desires, of the judgment and candor that it fosters, or of its true purging of the spirit, not with torches and squills and such rubbish, but with right reason, truth, and frankness.

by TK Ramchand A collection of human observations in prose and verse. From the naming of male and female humans to exploring man's......

by John Xavier On the Metaphysical Principles of Nature This book is a collection of aphorisms addressing several of the classic que......