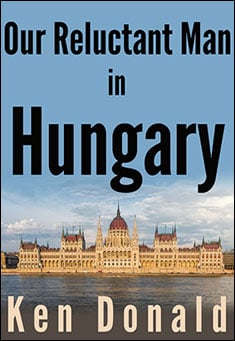 It is 1956 and Hungary's rebels desperately need the help of the West if they are to overthrow their communist masters.

Could this be another job for Captain Thomas Fletcher, RAF pilot and unwilling member of the Secret Intelligence Service?

Seduced by the beautiful Anna Novak and facing the wrath of Colonel Kutuzov, the brother of his late adversary, can Fletcher secure Hungary's freedom?

I was feeling pretty pleased with myself back in '56. As you will no doubt be aware, I'd been fortunate enough to escape captivity and death at the hands of the North Koreans and their Chinese allies - and come through the whole nightmare of a war pretty well unscathed. If you are not privy to the pertinent facts, then may I be so humble as to direct you to my earlier memoir - a frightening tale and factually accurate in every detail. You have a gentleman's word on that.

Once I'd been shot of Korea, I had a fine old time in Japan working for His Majesty's Secret Intelligence Service. You see, my time in the 'Land of the Rising Sun' was given over in unequal measure to accumulating useless information on the one hand, and earning notches in my bedpost on the other - and very rewarding it was too.

My fun wasn't to last, of course, and even before our young Queen had taken the reins, I was dragged off to another Godforsaken corner of Asia - that is to say, Vietnam. To be more precise, I was cruelly tricked by a designing female - but I won't go into that just now.

Barely had that nightmare passed me by when one of our ungrateful leaders, Sir Anthony Eden, happily chose to throw your reluctant hero into mortal danger all over again. When he decided he wanted to investigate the rumours of an impending Peasants' War coming out of Hungary, he went straight to Henry Biggins in our intelligence department.

Biggins, as you will know if you have read my memoirs, considered himself to be my superior - when in fact he was more the Lion's Provider, and simply got in the way. Anyway, he was volunteering my services faster than a pimp in a brothel.

When he finally informed me of his kind offer of a trip to Hungary, the alarm bells still failed to ring their warning. But then again, why would they? Hungary may well have been behind the Iron Curtain, but we weren't at war, and as far as I knew these so-called rumours of unrest were just that - rumours.

The communists had a stranglehold over the country and they weren't about to let the local populace cause any trouble, surely? Aye well, if I'd only known what was coming I'd have been on bended-knee, happily begging Sir Anthony to send me back to no-man's-land in Korea.

I blame myself, of course, for listening to Biggins in the first place - but he knew my weaknesses, you see. Not only was I to receive expenses of a healthy nature, but somehow he had also contrived to find an absolute peach with whom I was to make contact upon entering the country. You'd have thought I would've known better, but the vision of me sampling the beguiling charms of a young and beautiful Magyarian maiden was sending me into delirium.

As I stared out from our offices on The Broadway, watching the rain pelt down on St James's Park, I actually started to get excited by the whole idea - fool that I was.

"The young lady's name is Anna Novak. She graduated from university with a first class degree in English and subsequently became a journalist," explained Biggins.

"At least that will make things a little easier - considering my Hungarian's almost non-existent," I said, trying to sound as enthusiastic as I could.

by Bradley Pearce From Capri to Timbuktu the adventure picks up where The Ring leaves off. With the discovery of an ancient parchment. Bur......