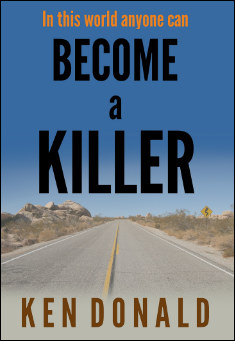 Become a Killer
By Ken Donald

A man is shot dead by a sniper. Detectives Pete Bradley and Madison Culver of the San Diego Police Department are sent to investigate. Unfortunately, their only suspect has an airtight alibi.

But that’s not their only problem.

Madison blames her partner for the death of her father.

And when US Marine Sergeant Jim Foster offers to help with the investigation, Madison suspects he is hiding a dark secret.
No wonder she can’t decide where to place her trust.

That is until Bradley uncovers a secret military project.

Now it’s too dangerous to work alone - in a world where anyone can become a killer.

Detective Madison Culver sat in her car, parked outside the main gates to the Traynor farm, cursing her partner. But this was nothing new. She knew that she couldn’t rely on Bradley, and the fact that he was now more than twenty minutes late only confirmed that. As far as she was concerned, his former partner had died because of his incompetence. But she hadn’t shared her feelings with her superiors – feelings made all the worse because Bradley’s former partner had been her father.

While she waited, she recalled the time she and Bradley had sat in her car together, staking out the address of a suspect in a bank robbery. Bradley had fallen asleep, clearly not concerned with the fact that he was on duty. Not long after that, he began to whimper. Madison had looked across to the passenger seat of her car in total disbelief. The man had started crying and was mumbling to himself.

Tears erupted, and Bradley began to bawl. Madison had elbowed him in the ribs, and he’d jumped in his seat, momentarily unaware of his surroundings. He’d looked over to her, clearly embarrassed, and did his best to wipe away the evidence of his tears. Madison had said nothing.
If Madison had only known, it wasn’t the first time it had happened. He’d had the same dream before, in a doctor’s waiting room, and he’d finally woken to find himself being stared at by those around him. The words ‘little squirrel’ still echoed around his head, so he knew he must have uttered them.

But the onlookers in the waiting room hadn’t seen what he’d seen - a little squirrel, covered in blood.

Bradley’s car appeared in Madison’s rear-view mirror, interrupting her thoughts. He got out and ran to her car, as if this could make up for the twenty minutes he’d kept her waiting. He leant against her door and she looked up, spotting a crusty stain on the front of his jacket. He noticed her staring and looked down to see what had grabbed her attention. He shrugged, took a handkerchief from his pocket and dabbed at the stain, making it worse.

Bradley looked at his watch, as if he didn’t believe her.

Bradley gave a boyish smile, clearly hoping that would be enough to deserve her forgiveness. She didn’t give him the satisfaction of smiling back. Instead she nodded at her passenger door.

“Hop in. We can take my car. Leave your car here – together with your jacket.”

As she watched him make his way back to his car and do as instructed, she had to remind herself that Bradley had been a detective while she’d still been in uniform, handing out speeding tickets.

It took them just over five minutes to reach the sprawling farm buildings that constituted the Traynor estate. Two patrol cars and a white van were already parked on the sweeping, gravel driveway. The forensic team had beaten them to it, thanks to Bradley’s tardiness. There was an uncharacteristic chill in the morning air and Bradley shuddered when he got out of the car. Madison was wearing a dark grey fur-lined jacket, and Bradley briefly considered asking her if she had a spare but thought better of it.

He looked out across the field to the right of the property, where a patrolman from the Sheriff’s Department was erecting a barrier of tape, warning people to stay away from the crime scene. A tech-guy in overalls was searching the ground surrounding the body. Bradley headed in his direction without saying a word and Madison shook her head, cursing.

“I guess I’ll go inside and talk to the family then,” she said with as much sarcasm as she could muster, but it was lost on Bradley and he simply waved a hand in acknowledgement.

Bradley stopped a few feet from the murder scene, knowing better than to get too close and end up accused of contaminating the area. The man in the overalls smiled and waved.

Bradley had to squint to make out the man’s face, partially hidden by the hood of his plastic suit.

Murray got up off his knees and made his way towards Bradley, managing to tear a piece of the tape the patrolman was carefully tying to a tree. The officer swore, but Murray didn’t notice.

Murray went to shake Bradley’s hand but realised he was still wearing his latex gloves. He quickly tore the one from his right hand and pumped Bradley’s fist.

“I haven’t seen you since Culver bought it during your last case. You know, the one where…”

“Yeah, I know the one,” said Bradley, not letting Murray finish, but the ballistics expert didn’t take the hint.

“Boy, that was a rough one. You never caught the guy, did you?”

“Not yet? I thought they took you off the case when Culver handed in his chips.”

Murray was tempted to ask what he meant, but Bradley’s scowl told him to drop it.

“What were you looking for?” Bradley asked, changing the subject and nodding at the ground where Murray had been crouching on his knees.
“Bullets.”

“No. And there’s no sign any other shots were fired. So, whoever killed the poor bastard got him first time and it was a head-shot. The guy must be good.”

“What makes you say that?”

Murray gestured to some trees in the distance.

“That’s the only place where a shooter could hide. That far away, you’d have to have a pretty good aim, even in the still morning air.”
Bradley gestured towards the house.

“Unless the shot came from there.”

“Maybe, but I doubt it. Traynor’s head is a mess, but he fell like a stone and I figure, from what’s left of the exit wound, that the bullet came from the trees.

“Have you searched over there for casings?”

“Not yet. That was going to be my next job.”

Bradley looked over at the body. The left-hand-side of the head was missing.

“When you said his head was a mess you weren’t kidding, were you?”

“It’s a bit too early to tell, but I reckon the bullet was altered to explode on impact.”

“So, what are you saying? Professional hit-man?”

“To kill a farmer? That’s a bit of overkill, don’t you think?”

“Hey, that’s not my department. That’s why they pay you the big bucks.”

Bradley smiled and pointed at the trees.

“That’s the funniest thing I’ve heard all day. Let me know if you find anything over there before you leave. I’ve got to get back to my partner.”

“You mean Madison Culver. Hell, man, if she was my partner, I’d never leave her side.”

“Not any more. Divorce came through three weeks ago.”

Murray held up his ringless finger to illustrate the point.

“What can I tell you?” said Bradley, wishing he hadn’t got into the conversation. “Life’s a bitch.”

Murray watched Bradley make his way to the house and noticed his old friend wasn’t wearing a jacket, despite the cold. Maybe the detective really was losing it, just like the guys downtown said.

by Stellen Qxz She’s an outspoken activist priest who may be headed for premature sainthood. He’s a hometown boy made good......