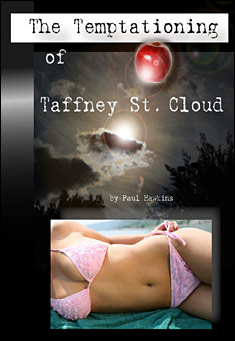 Taffney St. Cloud, the statuesque vampire-slaying bombshell introduced in "The Vampirening of Taffney St. Cloud," must defend the suburbs from a brood of younger, edgier vampires even as a swarthy stranger enters her life and her old slaying partner sinks into self-pity following a Lich's bite. Can she revive him? Who is the stranger? And what does it all have to do with the Harvest Moon Ball?

Taffney had to work in her mother's hair salon. Even people whose job it is to slay vampires and other forms of the undead have to have a day job, because they have to pay for things some way, and at night - well at night, they are busy slaying the undead and it is hard to work a cash register or fast food window or just about anything else when you are busy with that.

And then of course there was the matter of explaining Taffney's sudden transformation by an unexpected but long-foretold unique reaction to a Lich's bite from a somewhat plain, dark-haired, and big-boned girl into a tall and buxom stunning alabaster warrioress, the very anti-thesis of the undead's dark evil - all of which occurred and has been described in the climax of our last adventure. At first her mother tried to explain it by saying she was Taffney's cousin from New Jersey, Taffnina, but no one was buying that and then she said she was her cousin Inga from Sweden and a lot more people seemed to think that that was much more possible, but the trouble was that Taffney could not carry off the accent for more than a sentence or two and everything got all awkward and so after a while they just broke down and admitted that it was Taffney but that her mother had given her the best damned makeover ever, and so in addition to making the lives of all the local undead miserable her transformation ended up boosting business at her mother's hair-and-nails salon quite a bit. And anyway, Taffney liked working in the salon and she got pretty good at making ladies' nails all fancy with ornate polish and rhinestones on them, and so she had a good career to fall back on in addition to her slayening skills.

But you are not reading this story for information on doing hair and nails, for if you were you would soon find that there are better books out there, some with pictures, and so I proceed to the guts of our story, if you will, and the new threat of Vampirening that descended upon Sunvalleydale more or less in conjunction with the Sunvalleydale Junior College Harvest Moon Ball, and how a new fellow slayer appeared, a compelling distraction to Taffney's affections for her stalwart but moody companion, the 12,000-year-old but twenty-something-looking Watchener Against the Ways of the Wicked, Bradley (who, as we detailed in the last volume, was liable to accidentally lapse into old-man speak over trivial things like his soup being too cold or about the cost of a movie or how kids were so fat these days because they didn't do chores or walk to school).

And so one day while Taffney was working in her mom's salon and had just finished up what she thought was a rather fine fake-nail job with rhinestones and yin-yang symbols, a dark, mysterious, masculine hand suddenly draped itself across her table. She followed the strong hand up to see a swarthy, handsome fellow more or less her own age seated opposite her, rippling with muscles and sporting a pencil-moustache like Errol Flynn and wearing a red shirt made of silk or rayon or some other shiny fabric, and it was mostly unbuttoned so as to show off his fancy gold jewelry. Some of the jewelry consisted of odd menacing twists of metal as if to form runes to ward against evil, but one looked like a unicorn although he immediately and brusquely insisted that it was not, that it was in fact an ancient fell beast far more menacing and mysterious, but she still thought of it as 'that pretty unicorn necklace,' and she resolved to get it from him before their acquaintanceship was over.